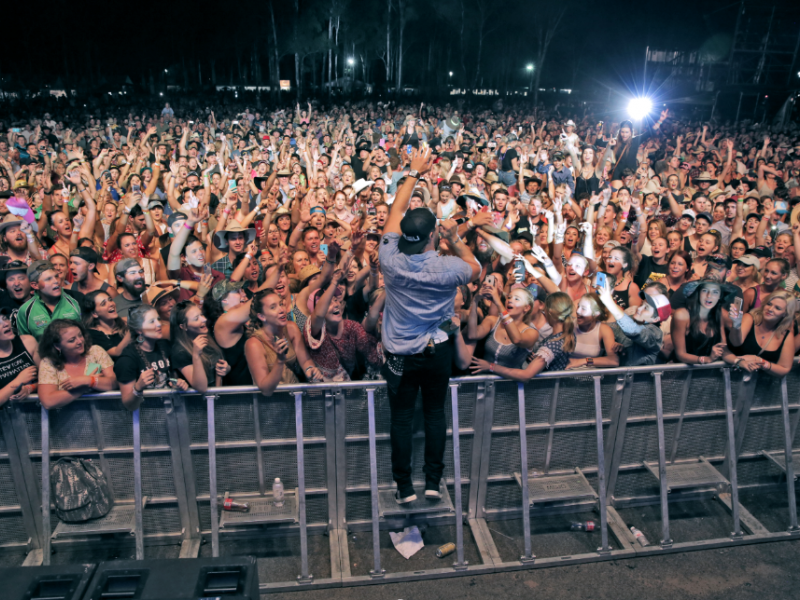 NASHVILLE, Tenn. (March 16, 2016) – Every time he takes the stage,Chase Rice has only one goal in mind: to leave every person in the room feeling something different than they did when they walked in. His dedication to reaching each and every fan has led the energetic entertainer over thousands of miles on the road, and for the past 17 days, all the way around the world. Starting with a sold-out debut show at The Republik inHawaii, Rice made his way through four U.S. military bases in Japanperforming for troops and completed his run at the sold-out CMC Rocks music festival in Australia, where his Ignite the Night album had just topped the ARIA Country Albums chart the week prior.

“It’s always been a dream of mine to tour overseas, and performing for our troops in Japan was a life-changing experience,” said Rice. “We are blessed to live in a country where we have the freedom to go out and entertain people every night, thanks to the sacrifice that our servicemen and women make to keep us safe. The fact that they knew our songs and sang along at every show is very humbling, and then having the No. 1 album in Australia on top of that – it just blows my mind. We will be back!”

Presented by Armed Forces Entertainment and Stars for Stripes, Rice performed with his full band at military bases in Atsugi, Yokosuka, Yokota and Okinawa. They continued from there to Queensland, Australia for the three-day CMC Rocks music festival, where Rice performed to sold-out crowds and sold the most albums of any artist at the festival’s on-site record store. His U.S. chart-topping album, Ignite the Night, officially debuted via Sony Music Entertainment Australia on February 25 and peaked at No. 1 on both the ARIA Country Albums Chart and the iTunes country albums Australia chart, with the hit single “Ready Set Roll” also securing the top spot on Australia’s iTunes country singles chart.

"I had a suspicion that Chase Rice was going to be the unexpected discovery artist at this year's festival,” said Rob Potts, CMC Rocks festival promoter. “From topping the Aussie country chart a week before he arrived, to the crazy reaction his live performance slots generated, he was a huge hit at the event. Nothing accentuates this more than him topping CD sales at the massive on-site record store, taking out the No. 1 Seller position even though they sold out of his stock. Chase returns to the USA having made a serious impact with the Aussie fans.”

The ACM New Male Vocalist of the Year nominee will launch his fourth U.S. headlining tour when Campus Events Network Presents College Days, Country Nights: The Chase Rice Back to College Tour kicks off in April and will also perform at select festivals. Upcoming tour dates are as follows:

About Chase Rice
Within a few short years of moving to Nashville, country music maverick Chase Rice has already built a loyal fan base across the country through his energetic live shows and gained the attention of industry professionals with his edgy, eclectic sound. Rice’s Ignite the Night was released on Columbia Nashville/Dack Janiels Records and debuted at No. 1 onBillboard’s Top Country Albums and No. 3 on the all-genre chart. That album produced a pair of Top 5 hits, the Platinum-certified "Ready Set Roll" and “Gonna Wanna Tonight.” His new single “Whisper,” from a forthcoming 2016 album, is available at digital retailers and country radio now. After supporting Kenny Chesney’s The Big Revival Tour 2015, Rice consistently sold out 2,500-3,000 seat venues on his JD and Jesus Tourand will launch his fourth headlining tour in April with Campus Events Network Presents College Days, Country Nights: The Chase Rice Back to College Tour. He is currently nominated for ACM New Male Vocalist of the Year.

About Stars for Stripes
Stars For Stripes is a non-profit 501 (c) (3) corporation dedicated to providing quality celebrity entertainment to internationally deployed U.S. military forces. Stars for Stripes celebrity tours improve the morale and general welfare of our U. S. Military personnel and promote patriotism and civic pride among the troops and the general public. For more information visit www.starsforstripes.com.