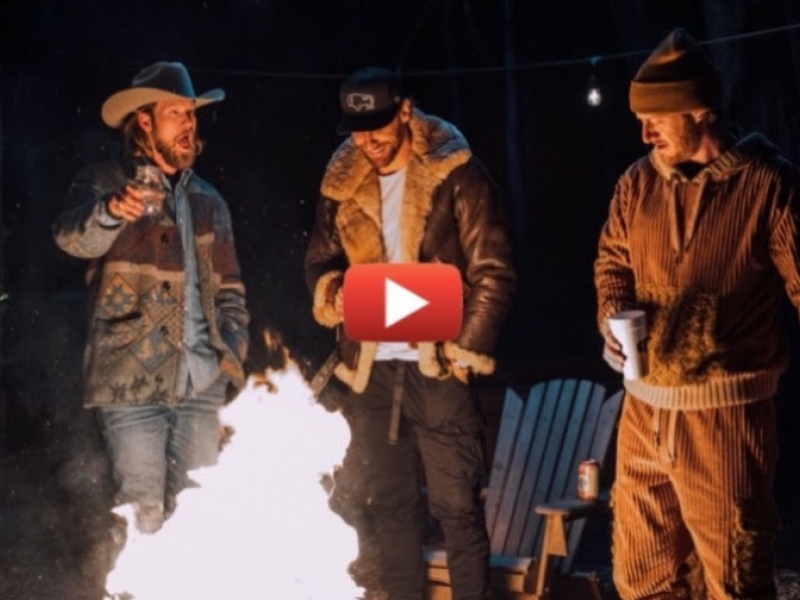 Performing from Tin Roof on Broadway, the home of Nashville’s iconic honky-tonks, Rice brings to life the song’s celebration of slowing down to enjoy meaningful conversation with friends while spotlighting the hopeful resurgence of live music in the heart of Music City.

“I remember saying ‘sitting here, drinking beer and talking to God’ to a friend at the end of 2019, not even knowing it would turn into a song idea, because at that time I realized that I needed to slow down, refocus and be able to appreciate the calm as much as the chaos.” reflects Rice. “When we look back on this last year, one thing I’m most grateful for is the time at home, sitting around the fire with loved ones and reconnecting with what really matters in life. I can’t wait to bring the song that came out of that mindset to ‘Jimmy Kimmel Live!’ from one of my favorite places in Nashville.”

The growing hit, which features Florida Georgia Line on the recorded version, follows Rice’s recent Platinum-certified Top 10 “Lonely If You Are” as well as his Double-Platinum certified two-week chart topper “Eyes On You” and comes with the promise of new music on the horizon.

Rice, who will join Kane Brown on the NBA arena Blessed & Free Tour at the top of 2022, also recently made his debut at the famed Ryman Auditorium, performing to a sold-out limited capacity audience as well as a live stream audience watching from home.

“I grew up listening to country music. Never dreamed I'd be part of it, but last night I got to play the Ryman and it was one of the most special moments of my career,” shared Rice after the concert. “To play in a building with that much history of so many artists that paved the way for a guy like me couldn't have been more of an honor.”

About Chase Rice
With more than 2 million albums sold and over 1.7 billion total streams, plus a legion of passionate fans at his high-energy concerts across the globe, Chase Rice has established himself as a powerful force in Nashville and beyond – yet he genuinely sees new releases The Album Part I and Part II as the launching pad for music that says what he wants to say, how he wants to say it. With songs such as his Platinum-certified Top 10 hit “Lonely If You Are” and new single “Drinkin’ Beer. Talkin’ God. Amen.,” this is the same gravely-voiced Chase Rice fans first fell in love with years ago – but better. Freer. Unbeholden and uninhibited, somehow capable of evoking Chris LeDoux and The Chronic, campfire singalongs and stadium anthems, all at once. The project builds upon the success of his sophomore album, Lambs & Lions, which featured the Double-Platinum, two-week chart topper “Eyes On You” – Rice’s first No. 1 as an artist and the most-streamed song of his career. Lambs & Lions followed Ignite the Night, which debuted at No. 1 on Billboard’s Top Country Albums and No. 3 on the all-genre chart, producing a pair of Top 5 hits; “Ready Set Roll” and “Gonna Wanna Tonight.” In addition to supporting Kenny Chesney’s The Big Revival stadium tour, Rice has consistently sold out 2,500-3,000 seat venues on his own headlining tours and is set to join Kane Brown’s Blessed & Free Tour in early 2022.