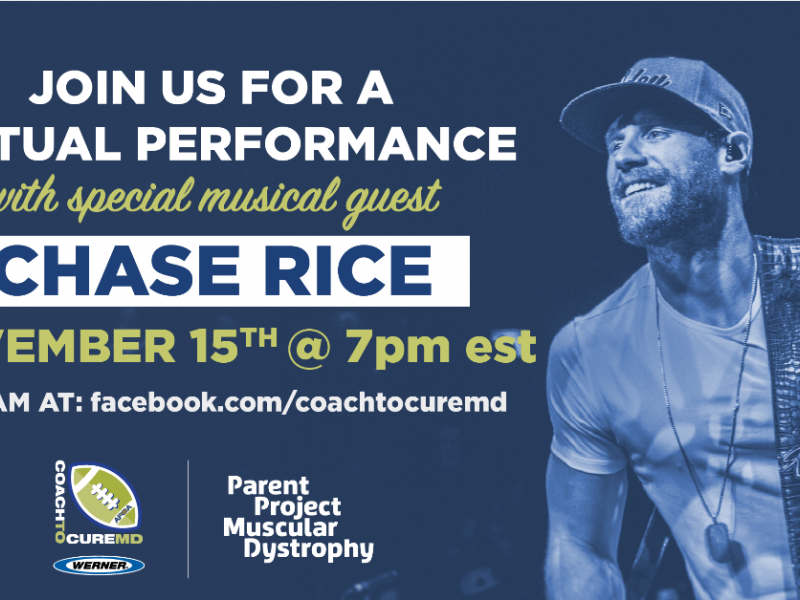 WHAT: Multi-Platinum entertainer Chase Rice will host a special live stream concert to raise awareness for Coach To Cure MD in their fight to find a cure for Duchenne muscular dystrophy, supporting the cause via a month-long awareness campaign under his Head Down Eyes Up Foundation’s charitable efforts. Now in its 13th year, Coach To Cure MD is the official charitable partner of the American Football Coaches Association (AFCA) dedicated to supporting Parent Project Muscular Dystrophy (PPMD), the largest, most comprehensive organization in the U.S. focused entirely on Duchenne.

Rice, who first became connected with the cause through relationships formed during his own time as a college football player, will host the live stream concert to bring additional attention to the cause during a year when Duchenne families cannot take to the sidelines as they have since 2008. The virtual performance is a free event, with fans encouraged to support the fight to end Duchenne by going to CoachToCureMD.org to make a donation.

“I love college football and so many of the coaches I know have personal relationships with families from welcoming them to the sidelines over the years. Seeing the impact they have on these kids and the cause as a whole is why I wanted to get involved,” said Rice, who played linebacker for the University of North Carolina before finding success as an artist. “In a year where game days look a little different, I hope that we can still help raise awareness and funds for this important cause through the power of music.”

Duchenne is the most common fatal genetic disorder diagnosed during childhood, primarily affecting boys of all races and cultures. People with Duchenne develop progressive muscle weakness that eventually causes loss of mobility, wheelchair dependency and a decline in respiratory and cardiac function. Currently there is no cure for Duchenne, but thanks to Coach To Cure MD and the work of Parent Project Muscular Dystrophy, there is hope.

About Chase Rice
With nearly 2 million albums sold and more than 1.6 billion total streams, plus a legion of passionate fans at his high-energy concerts across the globe, Chase Rice has established himself as a powerful force in Nashville and beyond – but he genuinely sees new releases The Album Part I and The Album Part II as the launching pad for music that says what he wants to say, how he wants to say it. With songs such as Top 10 lead single “Lonely If You Are” featuring sleek rhymes over heartland six strings mixed with EDM-laced drama, this is the same gravely-voiced Chase Rice fans first fell in love with years ago – but better. Freer. Unbeholden and uninhibited, somehow capable of evoking Chris LeDoux and The Chronic, campfire singalongs and stadium anthems, all at once. The series follows his sophomore album, Lambs & Lions, released with Broken Bow Records in 2017 and featuring the Double-Platinum, two-week chart topper “Eyes On You” – Rice’s first No. 1 as an artist and the most-streamed song of his career. Lambs & Lions followed Ignite the Night, which debuted at No. 1 on Billboard’s Top Country Albums and No. 3 on the all-genre chart, producing a pair of Top 5 hits; “Ready Set Roll” and “Gonna Wanna Tonight.” After supporting Kenny Chesney’s The Big Revival stadium tour, Rice has consistently sold out 2,500-3,000 seat venues on his own headlining tours. For more information, visit www.chaserice.com and follow on Twitter and Facebook @ChaseRiceMusic or on Instagram @ChaseRice.

About Coach To Cure MD
Coach To Cure MD, presented by Werner Ladder, is a partnership between the American Football Coaches Association (AFCA), a professional organization for over 10,000 college and high school football coaches and staff, and Parent Project Muscular Dystrophy (PPMD), the largest national charity devoted exclusively to Duchenne muscular dystrophy (Duchenne). In 2008 the AFCA adopted PPMD’s Coach To Cure MD program as one of their charity efforts. One reason the AFCA was drawn to Coach To Cure MD was because of the unique parallels between Duchenne, a disorder which robs young men of precious muscle strength and college football, a game where young men are at the peak of their muscle strength. The goals of Coach To Cure MD are simple: raise national awareness of the disorder and raise money to fund research for a cure. One football Saturday of each season, AFCA coaches nationwide agree to promote Coach To Cure MD. By wearing armbands this Saturday (November 14), mentioning Coach To Cure MD during on and off-field interviews, and in some instances doing even more extensive media relations around the date, coaches are rolling up their sleeves and proudly getting involved. For more information, visit www.coachtocuremd.org.

About the Head Down Eyes Up Foundation
The “Head Down Eyes Up” mentality was born during multi-Platinum entertainer Chase Rice’s junior year at the University of North Carolina. After being injured during the opening game of a football season where he was poised to become a breakout star, Rice was left with an ankle that needed rehab and a heart and mind that were crushed. While rehabbing his ankle injury, he caught his reflection in the mirror to see himself in a way he’d never seen himself before: his head was down, but his eyes were up – ready to do everything he could to fight for success and redemption.

From that day on, “Head Down, Eyes Up… Keep Going” became Rice’s personal motto, eventually developing into the charitable Head Down Eyes Up Foundation. Funded in part by the Head Down Eyes Up apparel brand, the Foundation embraces the core values that define the “Head Down Eyes Up” mentality: inspiring people to reach for success not by looking forward to an end result, but by keeping their head down and fighting every step of the way while focusing on each individual moment ahead.

Specifically, the Head Down Eyes Up Foundation exists to support children who face inordinate obstacles in their path to success by equipping them with the mental tools and physical resources to keep fighting in their pursuit of a dream, both directly and by partnering with established nonprofit organizations.