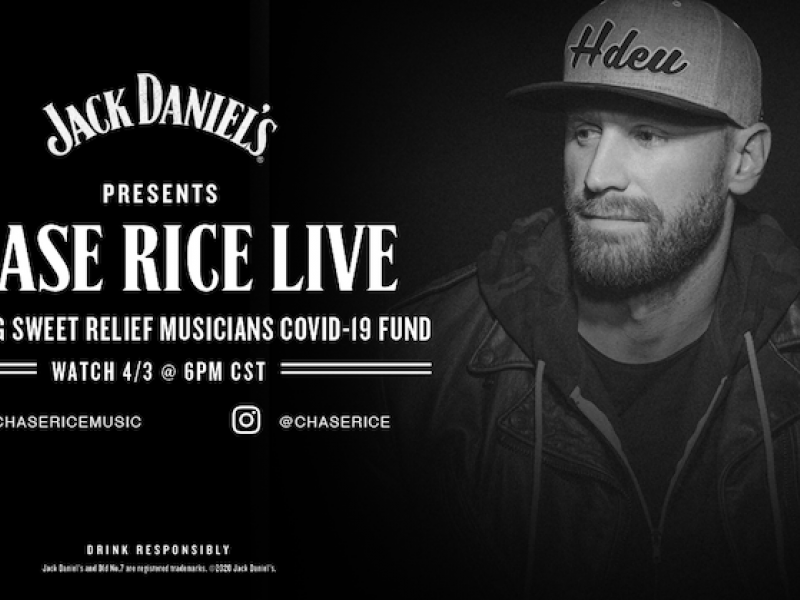 Chase Rice and Jack Daniel’s have a long history of collaborating to create meaningful moments and memories and that tradition continues as they come together this Friday, April 3 at 6 p.m. CT to host a “Friday Night Happy Hour.” Rice is set to perform songs from his home to benefit Sweet Relief Musicians Fund’s COVID-19 Fund.

Airing live on Rice’s Instagram and both Jack Daniel’s and Rice’s Facebook pages, the virtual concert will feature acoustic performances of current Top 25 single “Lonely If You Are” off his recent chart-topping surprise release The Album Part I and a sneak peak of new music off the forthcoming Part II as well as other hits from his multi-Platinum career.

“We initially had February and March off this year so we could focus on writing and recording The Album Part II, and I can’t wait to see what everyone thinks of the new music we’ve been working on,” says Rice. “I’ve really missed playing for our fans, so connecting with them virtually while raising money for a good cause and drinkin’ some Jack Daniels is a damn near perfect Friday night in my books!”

Sweet Relief Musicians Fund is a 501(c)(3) nonprofit charity that for the past 24 years has been offering vital assistance to professional musicians and music industry workers in need. The world has been shocked by the devastating effects of COVID-19. Due to massive cancellations, many in the music industry are struggling to find the means to make ends meet during these unprecedented times. Sweet Relief has created a COVID-19 Fund to provide immediate assistance with medical expenses, lodging, clothing, food and other vital living expenses to those impacted due to sickness or loss of work.

“It’s been heartbreaking to see what this virus is doing around the world, and one of the places it’s hit closest to home for me is seeing all of my friends in the music industry lose out on work,” shares Rice. “I’m honored to join Sweet Relief Musicians Fund and my friends at Jack Daniel’s to support our own during this tough time.”

Rice has previously partnered with Jack Daniel’s to give back in other ways, including a private concert at the Tennessee distillery recognizing the nearly 70 percent of firefighters who volunteer their service, which was highlighted by a $75,000 donation to the National Volunteer Fire Council, as well as a flyaway trip for Rice’s most loyal fans to thank them for their role in the chart-topping success of his smash hit “Eyes On You.”

About Chase Rice
With over 1.6 million albums sold and more than 1.1 billion total streams, plus a legion of passionate fans at his high-energy concerts across the globe, Chase Rice has established himself as a powerful force in Nashville and beyond – but he genuinely sees new releases The Album Part I and The Album Part II as the launching pad for music that says what he wants to say, how he wants to say it. With songs such as lead single “Lonely If You Are” featuring sleek rhymes over heartland six strings and keys mixed with EDM-laced drama, this is the same gravely-voiced Chase Rice fans first fell in love with years ago – but better. Freer. Unbeholden and uninhibited, somehow capable of evoking Chris LeDoux and The Chronic, campfire singalongs and stadium anthems, all at once. The series follows his sophomore album, Lambs & Lions, released with Broken Bow Records in 2017 and featuring two-week chart-topper “Eyes On You” – Rice’s first No. 1 as an artist and the most-streamed song of his career with over 350 million streams and counting. Lambs & Lions followed Ignite the Night, which debuted at No. 1 on Billboard’s Top Country Albums and No. 3 on the all-genre chart, producing a pair of Top 5 hits; “Ready Set Roll” and “Gonna Wanna Tonight.” After supporting Kenny Chesney’s The Big Revival stadium tour, Rice has consistently sold out 2,500-3,000 seat venues on his own headlining tours. 2020 will see him join forces with Brantley Gilbert and Rascal Flatts on their nationwide tours.

About Sweet Relief Musicians Fund
Sweet Relief Musicians Fund provides financial assistance to all types of career musicians and music industry workers who are struggling to make ends meet while facing illness, disability, or age-related problems. In other words, Healing Musicians in Need. Sweet Relief was founded by singer-songwriter Victoria Williams in 1993. Victoria, while on a career-making tour with Neil Young, was forced to drop off mid-schedule after experiencing unexplained, debilitating symptoms. A long and painful diagnostic process revealed she had multiple sclerosis. After her diagnosis, a group of friends assembled an all-star album of Victoria’s songs, called Sweet Relief, which alleviated much of her medical debt. Vic sympathized with other musicians who were facing overwhelming medical expenses, and used some of the proceeds from the album to start Sweet Relief Musicians Fund.