CHASE RICE LAUNCHING BACK TO COLLEGE TOUR IN APRIL 2016 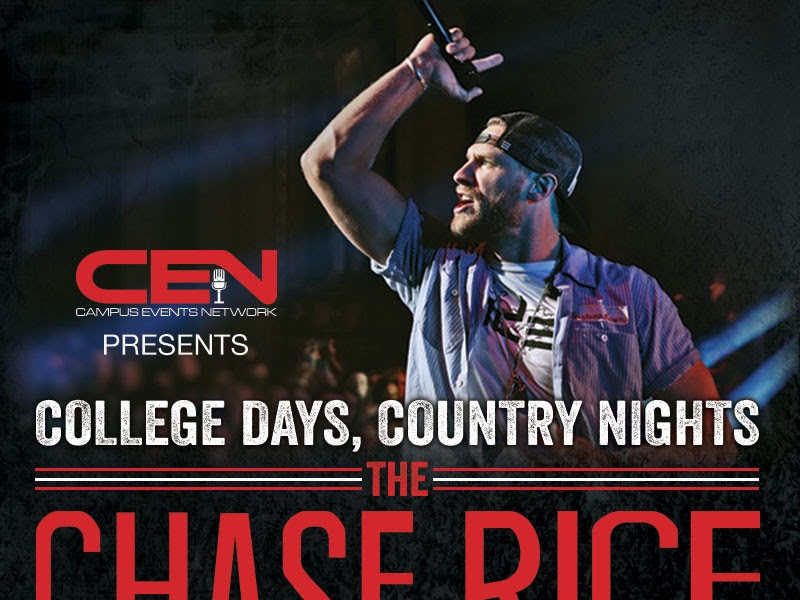 NASHVILLE, Tenn. (Feb. 16, 2016) – Chase Rice cut his teeth playing every dive bar and college town he could drive to for years, starting in his home state of North Carolina and steadily expanding with the groundswell of rabid fans that showed up night after night to hear what the straightforward entertainer had to offer. Three national headlining tours, a coveted opening spot for Kenny Chesney on his 2015 tour and one chart-topping country album later, Rice is preparing for the release of his second Columbia Nashville/Dack Janiels Records album and returning to his roots to play his new music for “the most discerning crowd there is: college kids” (Pollstar). Campus Events Network Presents College Days, Country Nights: The Chase Rice Back to College Tour will launch in early April, with the first round of dates being announced today, February 16.

Before returning to his alma mater, the University of North Carolina at Chapel Hill, Rice wanted to have some of the new music incorporated into his set. “We wanted to take our time with this new album and I want to put the good, the bad and all the grit in between into these songs,” he says. “The fans in a lot of these cities have been there for me since day one, so I’m looking forward to playing them some new music live and bringing them along on the next step of our journey.”

Rice, who is currently nominated for ACM New Male Vocalist of the Year, released the first single from his forthcoming album, “Whisper,” to digital retailers on February 5 and it immediately shot to the top of the iTunes country charts. Described by Rice as the “bridge” between his last album, Ignite the Night, and his as-yet-untitled 2016 album, “Whisper” will impact Country radio on Monday, Feb. 29.

The first round of dates for The Chase Rice Back to College Tour are as follows, with more to be announced in the coming weeks:

*Indicates that this show is closed to the public.

About Chase Rice
Within a few short years of moving to Nashville, country music maverick Chase Rice has already built a loyal fan base across the country through his energetic live shows and gained the attention of industry professionals with his edgy, eclectic sound. Rice’s Ignite the Night was released on Columbia Nashville/Dack Janiels Records and debuted at No. 1 onBillboard’s Top Country Albums and No. 3 on the all-genre chart. That album produced a pair of Top 5 hits, the Platinum-certified "Ready Set Roll" and “Gonna Wanna Tonight.” His new single “Whisper,” from a forthcoming 2016 album, is available at digital retailers now with a radio impact date of February 29. Rice consistently sold out 2,500-3,000 seat venues last fall on his third headlining tour, The JD and Jesus Tour, after supporting Kenny Chesney’s The Big Revival Tour last summer and he is currently nominated for ACM New Male Vocalist of the Year. For more information, visit www.chaserice.com or follow on Twitter@ChaseRiceMusic and www.Facebook.com/ChaseRiceMusic.