CHASE RICE LAUNCHES “HEAD DOWN EYES UP” PARTNERSHIP WITH LIDS 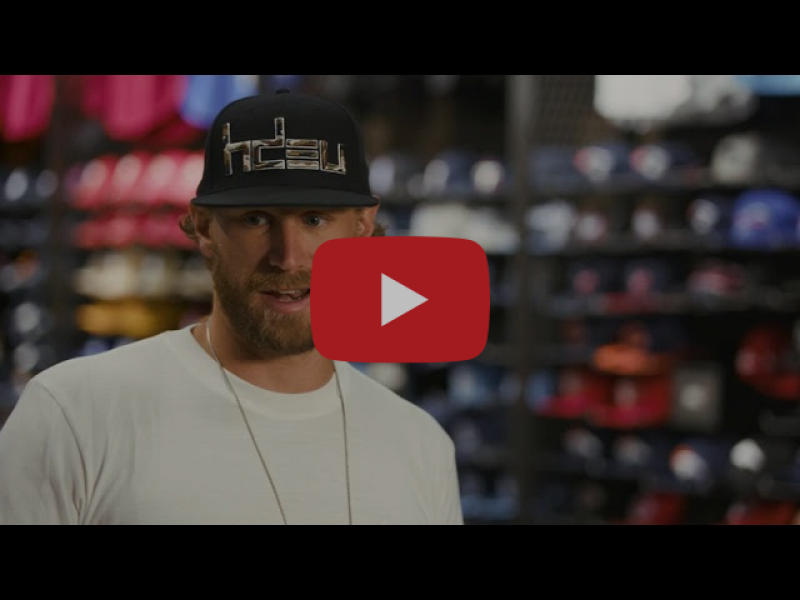 NASHVILLE, Tenn. – Multi-Platinum entertainer Chase Rice has partnered with Lids, the world's largest retailer specializing in the sale of officially licensed and branded headwear, to create exclusive hats under his fan-favorite Head Down Eyes Up brand. The first design is available exclusively at select Lids retail stores and on Lids.com starting today, Aug. 12, with an additional design to follow on Thursday, Aug. 26.

The “Head Down Eyes Up” mentality that inspired the apparel brand was born during Rice’s junior year at the University of North Carolina. While rehabbing an ankle injury sustained during the opening football game of what was set to be his breakout season, Rice caught his reflection in the mirror in a way he never had before: his head was down, but his eyes were up – ready to do everything he could to fight for success and redemption. From that day on, “Head Down, Eyes Up… Keep Going” became Rice’s personal motto, gaining even more significance after the tragic loss of his father a year later and the emotional period of finding himself that followed.

“I started writing HDEU on my hats as a reminder to myself; as a motivation to not give in to any of the pressures around me,” notes Rice. “After a while I started seeing that fans at my shows were writing it on their own hats, so I went to Lids and got 30 custom hats made to put out at the merch stand. We sold them all. I never set out to launch a clothing brand, but in that moment I realized just how universal this message is – everyone faces different challenges in life and no matter what those obstacles are we can all use the reminder to keep your head down, eyes up… keep going.”

Now, over a decade after that initial run of 30 hats, Rice’s full-circle partnership with Lids offers fans two upgraded versions of that original Head Down Eyes Up hat design. Featuring the classic HDEU lettering in a raised camouflage pattern on a classic snapback with matching camouflage under the brim, the first design is available now for $29.99.

A second hat, created in collaboration with Local Crowns, features a gray mesh back and includes the HDEU logo on a leather bison motif, a nod to Rice’s own herd at his Twin Eagles Creek Farm. The Local Crowns design will be available for purchase for $27.99 beginning Thursday, Aug. 26.

In addition to online availability at Lids.com, both HDEU hats will be featured in Lids stores throughout select areas of personal significance to Rice: his current home, Tennessee; his home state, North Carolina; and his birthplace, Daytona Beach, Fla.

As an added element of the partnership, Lids will also be making a donation to Rice’s Head Down Eyes Up Foundation. Funded in part by the Head Down Eyes Up apparel brand, the Foundation offers support to children facing extraordinarily difficult circumstances both directly and by partnering with established nonprofit organizations. In this way, the Head Down Eyes Up Foundation embraces the core values that define the overall HDEU mentality: inspiring young people to “Keep Going” by keeping their head down and fighting every step of the way, while focusing their vision on each individual challenge ahead.

About Lids
Lids is the largest retailer of hats in North America, with over 28 million sold per year across their 1,200 locations. Lids Sports Group is the largest licensed sports retailer in North America, selling fan and fashion-oriented headwear and apparel across the United States, Canada and Puerto Rico. Indianapolis-based Lids Sports Group carries officially licensed and branded gear aimed at empowering customers to represent their unique and individual style, team, passion and fun. Lids Sports Group operates stores under the Lids, Locker Room by Lids, Fanzz, Yankees Clubhouse Shops, Dodgers Clubhouse, Cardinals Clubhouse and numerous other nameplates. Lids also has locations within select Macy's department stores nationwide. To find a retail location near you visit blog.lids.com and join the #LidsLoyal on Instagram, Facebook, Twitter and LinkedIn @lids.