CHASE RICE KICKS OFF 2023 WITH DEBUT PERFORMANCE OF “I HATE COWBOYS” THIS FRIDAY, JANUARY 6 ON ABC’S “GOOD MORNING AMERICA” 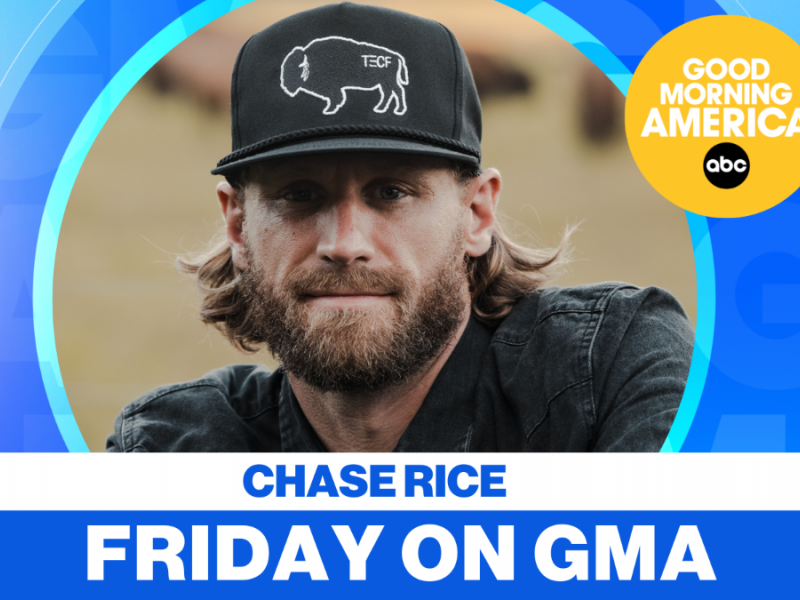 NASHVILLE, Tenn. – One of the few contemporary Diamond-certified songwriting cardholders, Chase Rice is set to kick off the new year with brand new music, joining “Good Morning America” this Friday, Jan. 6, for a performance of “I Hate Cowboys.” Tune in to ABC during the 8 a.m. ET hour for this live debut of one of the two title tracks on Rice’s forthcoming album, I Hate Cowboys & All Dogs Go To Hell, set for release Feb. 10.

In addition to the live performance airing this Friday, “I Hate Cowboys” will also be available everywhere that day along with an official music video that tributes the iconic history of cowboy culture. Written by Rice alongside HARDY, Ross Copperman and Old Dominion’s Brad Tursi, the song and corresponding visuals serve as a tongue-in-cheek ode to how effortlessly cool true cowboys really are.

“When you listen to the song you of course get that I don’t actually hate cowboys – I’m really fortunate to call several of them great friends,” emphasizes Rice. “But damn, doesn’t it make you crazy when Mr. Steal Your Girl kicks open the door — with that hat and those Wranglers, and he can two-step better than you, talk cooler than you? ‘I Hate Cowboys’ is an ode to the fact that just like Taylor Sheridan writes in ‘Yellowstone,’ if it were easier everyone would cowboy...hell, I wish I could!”

I Hate Cowboys & All Dogs Go To Hell ranges from emotional reckoning to this admiration of a Western way of life evidenced in the title track, and also includes recent releases “Key West & Colorado” and “Way Down Yonder” plus a reimagined album version of “If I Were Rock & Roll.” Rice serves as a writer on all 13 tracks, including three solo writes, and the project honors his late father, Daniel Rice, with its cover art.

I Hate Cowboys & All Dogs Go To Hell Track List:

About Chase Rice
With nearly 2.4 million albums sold and over 2.4 billion total streams, plus a legion of passionate fans at his high-energy concerts across the globe, Chase Rice has established himself as a powerful force in Nashville and beyond. With forthcoming album I Hate Cowboys & All Dogs Go To Hell crafted in his rural Tennessee home-turned-studio, his sound continues to evolve to reflect the realities of his life, as evidenced by recent releases “Key West & Colorado” and “Way Down Yonder.” The new music serves as a follow up to his three-part project, The Album, featuring his latest Platinum-certified No. 1 hit, “Drinkin’ Beer. Talkin’ God. Amen. (feat. Florida Georgia Line)” and Platinum-certified Top 10 hit “Lonely If You Are.” This is the same gravelly-voiced Chase Rice fans first fell in love with years ago – but better, freer; unbeholden and uninhibited. The new music builds upon the success of his sophomore album, Lambs & Lions, which featured the triple-Platinum, two-week chart topper “Eyes On You” – Rice’s first No. 1 as an artist and the most-streamed song of his career. Lambs & Lions followed Ignite the Night, which debuted at No. 1 on Billboard’s Top Country Albums and No. 3 on the all-genre chart, producing a pair of Top 5 hits; “Gonna Wanna Tonight” and Platinum-certified “Ready Set Roll.” In addition to selling out arenas with Kane Brown and Jason Aldean plus stadiums with Kenny Chesney and Garth Brooks, Rice also consistently sells out venues across the U.S. and Europe on his own headlining tours.