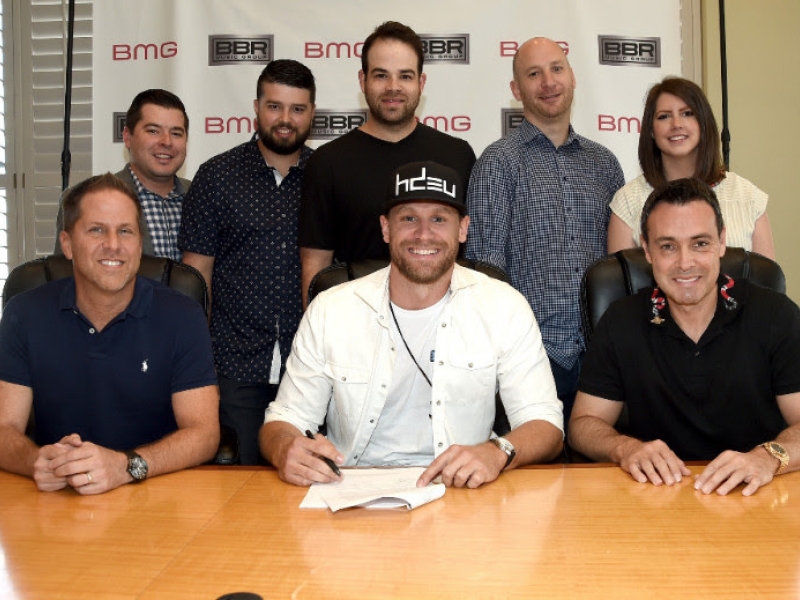 NASHVILLE, Tenn. – Chase Rice has quickly gained a reputation as a bit of an outsider with a wide independent streak in the country music world. Now, as initially reported by Rolling Stone’s Marissa Moss, he’s joining a record label that sees his point of view, inking a new deal with BBR Music Group/BMG, and that means new music for fans, and soon.  Rice has been assigned to the Broken Bow Records imprint, where he joins labelmates Jason Aldean and Dustin Lynch.

Rice joined BBR executives at their Music Row offices for the signing (see this week’s episode of CR24/7 here). “I can’t tell you how excited I am to join the BBR family,” Rice said. “I knew from the moment we began talking that the people here understand where I’m coming from, and I can’t wait to share all the new songs we’re about to make together. In fact, we’re so excited, we promise we’ll have new music for you within a month.”

Rice has been one of country music’s most exciting figures since arriving in Nashville. He co-wrote Florida Georgia Line’s megahit Diamond certified “Cruise” and his 2014 major label debut album, Ignite the Night, opened at No. 1 and yielded two Top 5 hits with “Ready Set Roll” and “Gonna Wanna Tonight,” in addition to over 900,000 in album sales. Rice initially released “Ready Set Roll” through his own Dack Janiels label and later partnered with Columbia Nashville for a wider release, though he never gave up control of his music to sign a long-term deal.

He selected BBR because of the label’s proven track record of fostering an independent spirit while still helping deliver hits for its acts. BBR is the home to country music outliers like Aldean, Lynch, Randy Houser, and Granger Smith, all artists who began as independents and continue to chart their own paths with millions of songs and albums sold.

“Chase has a track record of connecting with fans whether it is socials, concert tickets, singles, or album sales,” said Jon Loba, EVP BBR Music Group. “He knows himself and his audience and has formed a rabid following. We are so excited to have him join our family and can’t wait for everyone to hear some incredible new music.”

The 31-year-old singer-songwriter has had an eclectic life, playing football at the University of North Carolina, serving as a NASCAR pit crew member, even a role on a season of Survivor, all before finding success as a singer/songwriter/entertainer. His unrivaled live show has led to numerous sold out tours, a slot performing on Kenny Chesney’s stadium tour stops in 2015, and to ESPN’s Marty Smith noting in that sense, “Rice is an anomaly.”

Rice wrapped a highly successful run of pub dates earlier this year and is playing select shows and festivals throughout the summer. For news and upcoming tour dates, visit www.chaserice.com or follow on Twitter@ChaseRiceMusic and www.Facebook.com/ChaseRiceMusic.

In January 2017, BBR Music Group was acquired by BMG, the new model music company founded by Bertelsmann in 2008. BMG’s 14 offices across 12 core music markets now represent over 2.5m songs and recordings, including the catalogues of Chrysalis, Bug, Virgin, Mute, Sanctuary, Primary Wave and Talpa Music, as well as literally thousands of artists and songwriters attracted by its fresh approach.