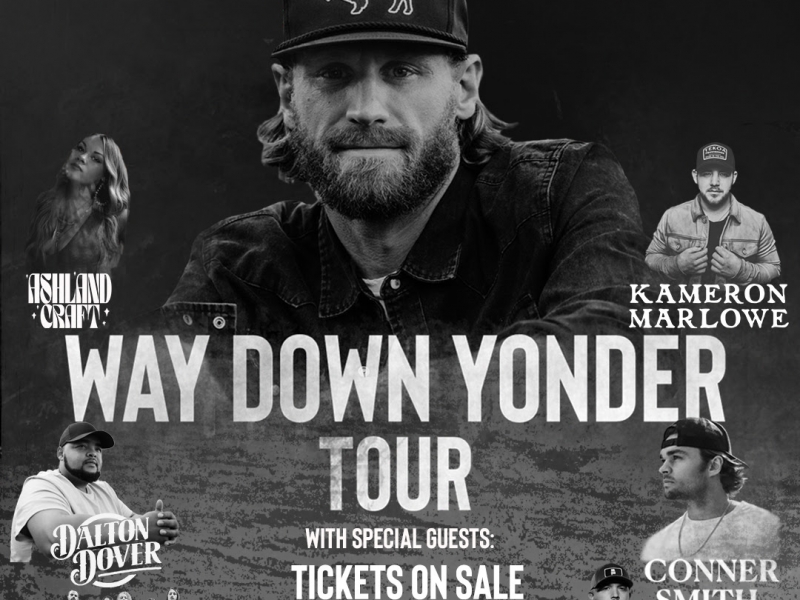 NASHVILLE, Tenn. – With his just-announced album I Hate Cowboys & All Dogs Go To Hell set to showcase the results of a year off the road spent reconnecting with his passions both musically and personally, multi-Platinum singer/songwriter Chase Rice is ready to bring that sonic return to his roots to fans across the country this spring on the Way Down Yonder Tour.

“I focused on ‘What can I put out that makes me come to life?’,” Rice shared recently with PopCulture of the new music he will debut on this tour. “Because if I come to life when I’m on the stage and up there singing songs that I’m passionate about and love, man, people are gonna love them that much more… I’m at the place in my life now where I just want people to know who I really am as opposed to who they think I am. I think this record’s a good start.”Kicking off March 3 in Laughlin, Nev., the headlining run presented by Coors Banquet spans 23 dates across the U.S. including iconic theaters such as Nashville Ryman Auditorium, Boston’s House of Blues and Athens’ Georgia Theatre, concluding April 29 in Rice’s birthplace of Daytona, Fla. Joining as special guests across varying dates are Avery Anna, Tyler Braden, Ashland Craft, Dalton Dover, Kameron Marlowe, Read Southall Band and Conner Smith.Tickets to all dates go on sale this Thursday, Dec. 15 at 10 a.m. local time via ChaseRice.com, with pre-sales beginning Tuesday, Dec. 13 at 10 a.m. local time.

The tour earns its name from Rice’s latest release off the forthcoming album, outlaw anthem “Way Down Yonder,” available everywhere now along with an accompanying Wild West-style music video. Written by Rice together with Hunter Phelps, John Byron, Blake Pendergrass and Corey Crowder during a writing retreat in Florida that also produced recent release “Key West & Colorado,” the song paints a vivid picture of hardworking characters living beyond the confines of the law:

“Way Down Yonder” was recorded along with the rest of the forthcoming album during a two-week period at Rice’s farm outside Nashville, with producer Oscar Charles using makeshift recording environment to capture a pure, raw style unlike any of his previous studio projects.

About Chase Rice
With nearly 2.4 million albums sold and over 2.4 billion total streams, plus a legion of passionate fans at his high-energy concerts across the globe, Chase Rice has established himself as a powerful force in Nashville and beyond. With the forthcoming album I Hate Cowboys & All Dogs Go To Hell crafted in his rural Tennessee home-turned-studio, his sound continues to evolve to reflect the realities of his life, as evidenced by recent releases “Key West & Colorado” and “Way Down Yonder.” The new music serves as a follow up to his three-part project, The Album, featuring his latest Platinum-certified No. 1 hit, “Drinkin’ Beer. Talkin’ God. Amen. (feat. Florida Georgia Line)” and Platinum-certified Top 10 hit “Lonely If You Are.” This is the same gravelly-voiced Chase Rice fans first fell in love with years ago – but better, freer; unbeholden and uninhibited. The new music builds upon the success of his sophomore album, Lambs & Lions, which featured the triple-Platinum, two-week chart topper “Eyes On You” – Rice’s first No. 1 as an artist and the most-streamed song of his career. Lambs & Lions followed Ignite the Night, which debuted at No. 1 on Billboard’s Top Country Albums and No. 3 on the all-genre chart, producing a pair of Top 5 hits; “Gonna Wanna Tonight” and Platinum-certified “Ready Set Roll.” In addition to selling out arenas with Kane Brown and Jason Aldean plus stadiums with Kenny Chesney and Garth Brooks, Rice also consistently sells out venues across the U.S. and Europe on his own headlining tours.