CHASE RICE TO HEADLINE THIS FALL; THE CADILLAC THREE TAPPED TO JOIN 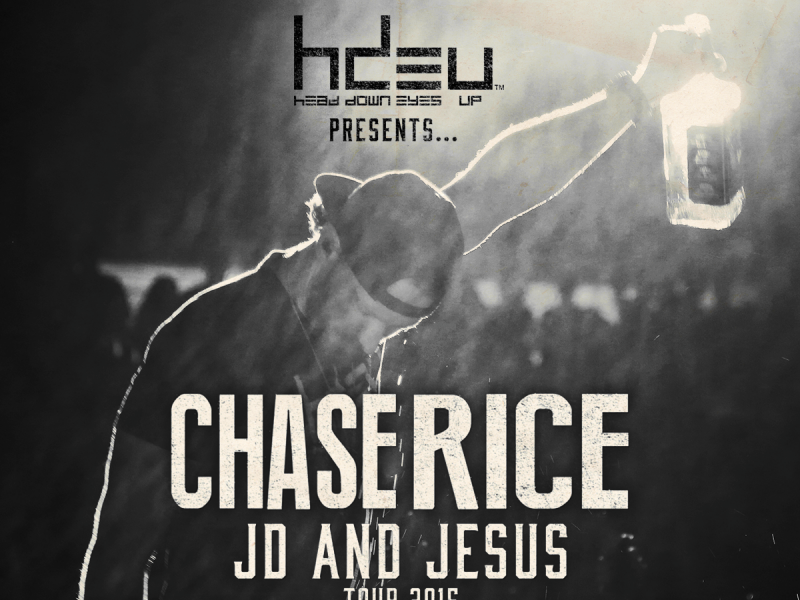 Rice, out now with Kenny Chesney on The Big Revival Tour, to kick off solo headlining tour, JD and Jesus 2015 Tour, in October

NASHVILLE, Tenn. (July 20, 2015) – Columbia Records Nashville recording artist Chase Rice has been touring steadily for the last five years--building a strong following, city-by-city in the flyover, but this year he has sharpened his skills as a performer after watching 8-time Entertainer of the Year Kenny Chesney while on the road with him for over 40 dates on The Big Revival Tour. An experience that Rice proclaims ignited an idea to continue the momentum from the summer into the fall with his own headlining tour, JD and Jesus Tour 2015, beginning in October.

"When I was playing football in college, I learned the most about my peers --and my competitors-- by studying their moves on and off the field," shares the North Carolina native. "Inadvertently at first but now out of this drive to personally be better for our fans, I have been engaging in the same practices I did while in school: observing and performing alongside Chesney and [Eric] Church, two of my musical heroes, on stage night after night. But in doing so, I have honed my own style, and so when this tour ends, I want to make sure my fans know they need to be ready because we're nowhere near done for the year."

Rice has tapped The Cadillac Three as a special guest for select appearances, ensuring a raucous vibe on the tour.

Dates and on-sale information will become available later this week.

Rice is one of country music’s fastest rising stars. As Taste of Country notes: “Chase Rice has seemingly come from out of nowhere to become one of the hottest young artists in country music over the last few years.”

The former University of North Carolina football player initially gained attention as the co-writer of “Cruise,” the highest-selling Country song of all time. He’s since released Columbia Nashville/Dack Janiels No. 1 album Ignite the Night. Current single “Gonna Wanna Tonight’ is rolling up the charts and into the Top 20.

Rice recently joined artists Sam Smith and Iggy Azalia when he launched his own VEVO Lift program (focused on emerging artists of note with excusive content). The music maverick also released a video for fan-favorite album cut “Ride” with the program.
Rice will continue on the road with Chesney through the end of August while playing select solo and festival dates for the rest of the summer. For more information on tour dates, including select headlining performances, visit www.ChaseRice.com and follow @ChaseRiceMusic on Twitter www.Facebook.com/ChaseRiceMusic.

The Cadillac Three
THE CADILLAC THREE is rapidly becoming known for their high-energy shows and gritty musical instincts. With opening slots on Superstar tours and sold-out stops across Europe, the trio of Nashville natives were named the UK Classic Rock Roll of Honour Awards Best New Band and one of the 10 NewArtists You Need to Know by Rolling Stone Country. Jaren Johnston (Guitar & Lead Vocals), Kelby Ray (Bass Steel Guitar, Dobro, Acoustic & Vocals) and Neil Mason (Drums, Percussion & Vocals) have weathered wild adventures as a Country group with a rockin’ edge and epitomize their self-described “country fuzz” sound with their Big Machine Records singles “The South,” featuring Florida Georgia Line, Dierks Bentley and Mike Eli (Eli Young Band) and “Party Like You.” CMT’s Samantha Stephens proclaims, “Sometimes you hear a song and it stops you in your tracks. That’s kind of what happened the first time I heard ‘White Lightning,’...” Available now on iTunes, Rolling Stone calls TC3’s latest offering, “...a smoldering ballad an unflinching look at love through the eyes of a Southern boy. [...] a compact bit of ear candy.”

The Cadillac Three, whose members include native Nashvillians Jaren Johnston, Neil Mason and Kelby Ray, have been friends and musical co-conspirators since childhood. The band has emerged with a sound all its own, hovering between radio-ready country anthems, hard rock, and traditional Southern folk. You could call it country fuzz, or hipster-billy, or any number of over-hyphenated, adjective-strewn things but when you boil it down there's only one way to describe it: darn good music, as pure and refreshing as a country creek. TC3’s new single, “White Lightning,” is currently climbing the charts