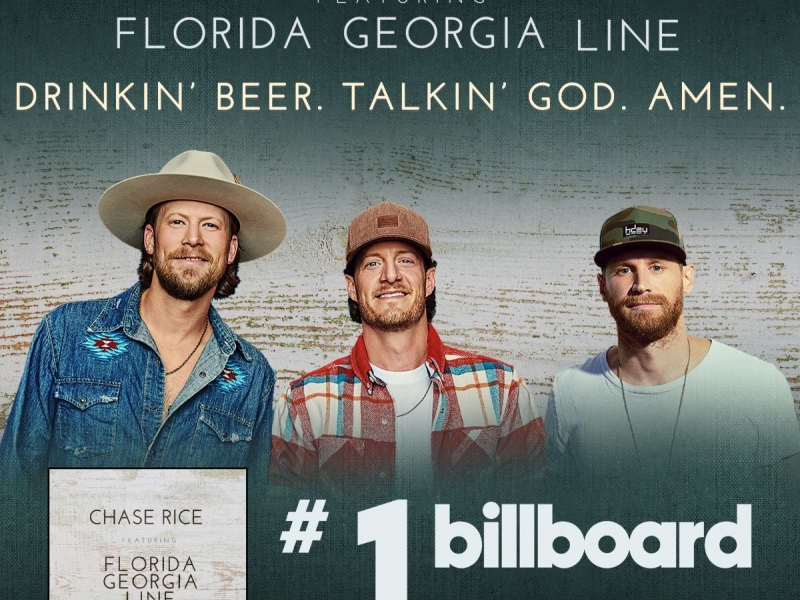 NASHVILLE, Tenn. – Multi-Platinum entertainer Chase Rice earns his third career No. 1 at Country radio today with his latest single “Drinkin’ Beer. Talkin’ God. Amen. (feat. Florida Georgia Line),” also earning distinction as the No. 2 song on Spotify’s most streamed “Hot Country” songs of the year thus far. The single is Rice’s second No. 1 as an artist, following his Double-Platinum certified, two-week chart topper “Eyes On You,” one of the Top 5 most played songs on Country radio in 2019.

Celebrated by Billboard as “addictive” and “instantly memorable,” “Drinkin’ Beer. Talkin’ God. Amen.” marks a full circle moment for Rice and Florida Georgia Line’s Tyler Hubbard and Brian Kelley, who first topped the charts as co-writers on FGL’s Diamond-certified hit “Cruise” when making music together as new-to-Nashville roommates more than a decade ago.

“Sharing a No. 1 song together not once, but twice, is more than we ever could have imagined years ago, when we were just three friends chasing a crazy dream,” notes Rice. “I’m so grateful to the fans and Country radio for connecting with and supporting this song the way they have. There’s no better feeling as an artist than knowing that writing and singing your truth resonates with people.”

Written by Rice together with Hunter Phelps, Cale Dodds and Corey Crowder, the song is emblematic of what Forbes describes as his “burst of creativity in recent months motivated by a renewed focus on his music future,” with catchy lyrics celebrating the power of slowing down to enjoy meaningful conversation, a topic that has felt more relevant over the past year than ever before:

“The journey of this song has been so special,” adds Rice. “Not only did it give me, Brian and Tyler the chance to work on music together again; it was also written on the bus at one of my last live shows before the world shut down – and now it’s sitting atop the chart just as we’re getting back to enjoying live music together. The timing couldn’t be more perfect.”

“There is always an inspiring energy when the three of us come together,” add Florida Georgia Line’s Brian Kelley and Tyler Hubbard, who served as producers on the song alongside Rice and Crowder. “You could just feel it in the house back when we were roommates, and it is amplified that much more now when we collaborate. Our first No. 1 changed all of our lives in more ways than we could have ever imagined, and we’ve certainly lived a lot of life since then. To be celebrating our second No. 1 together is surreal and a full circle moment. We’re so thankful to Chase for his friendship over the years and sharing in this crazy dream of ours.”

The chart-topping single is featured on Rice’s latest project, The Album, now available on all digital and streaming platforms HERE, as well as The Album (Acoustic), a stripped back version of the project, available HERE.
For more information and to purchase tickets to upcoming tour dates, visit www.ChaseRice.com and follow on Twitter and Facebook @ChaseRiceMusic and on Instagram @ChaseRice.