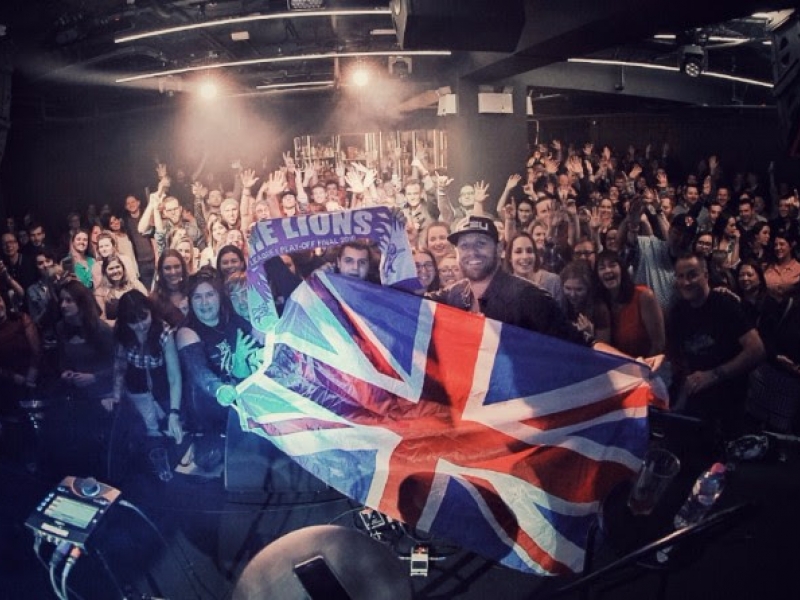 Nashville based country singer-songwriter Chase Rice, whose new album Lambs & Lions was released in November to much acclaim from both fans and critics, last week completed his first ever tour of the UK & Ireland, playing to sellout crowds across Glasgow, Manchester, Birmingham, London and Dublin. Audiences were treated to a rare solo acoustic performance from the star, with songs from the new album, along with picks from further back in his catalogue, including fan favourite "Carolina Can" and a version of the Florida Georgia Line hit "Cruise," which Rice co-wrote.

In his own words: “The fans that came out to the shows sang every word to every song, including album cuts from Lambs & Lions which is only a couple weeks old. Europe and the UK have true-to-the-core country music fans, and they genuinely blew our minds. Thank you for showing up and singing with us. The band and I are already planning our next tour as that was unreal!"

Among the positive reviews already stacking up for the tour, popular country website Nashville Over Here said “if you wanted an artist to get the party started, you’d be hard pressed to find one better than Chase”; while Entertainment Focus noted “it won’t be long before he’s selling out much bigger venues here”.

Rice reassured British & Irish fans he’d be back as soon as possible, with his full band. The new album Lambs & Lions is out now on BBR/BMG, with lead single "Three Chords and The Truth" gaining traction at radio on both sides of the pond.

ABOUT CHASE RICE + LAMBS & LIONS:
“The only formula is to put out great music,” says Rice. “It’s as simple as that. I won’t let anyone or anything get in the way of that anymore.”

Rice has released three albums—including, most recently, 2014’s Ignite the Night, which hit No. 1 on the country charts and reached the top five of the Top 200—but with Lambs & Lions, he is making a fresh start. With a new label and a renewed sense of creative purpose, he is making music that draws from multiple sources and influences, but is unified by his vision, integrity, and honesty.
“This is an album that stands for what I stand for,” says Rice. “I don’t think of myself as a country artist specifically—I’m here to be an artist, period. I’m very proud of the country genre, and I think we have some big country radio songs on here, but outside of that, there’s a story I wanted to tell, regardless of genre. I had to completely put out of my mind what anyone else would think. I knew I wouldn’t be satisfied until I took it as far as I possibly could.”

The ten songs on Lambs & Lions derive from Rice’s life and experience, triumphs and disappointments, and ultimately his determination to stand up for his convictions. Produced by Chris DeStefano, Mac MacAnally and, most surprisingly, Jacquire King (Kings of Leon, Cold War Kids), Lambs & Lions offers up sounds from the unsettling strings and horns on the title track to the spare piano and swelling choir of “Amen.” And if it took him walking out on his record company and finding a new home to get there, it also reflects the unconventional path that led him to make music in the first place.

Born in Florida and raised on a farm in Asheville, North Carolina, Rice was a promising linebacker at the University of North Carolina. “Football wired me for the rest of my life,” he says, “including in some wrong ways. So, I’ve had to learn to be more sensitive and when to be more aggressive. It’s a focus you carry on to everything you do in life.”

Encouraged by his father, he began playing guitar and writing songs in college. After his father died and an injury ended his football career, music became his solace during a period of depression. (The slogan he took to writing inside the brim of his baseball caps, "HDEU," served as a reminder to keep his head down, working, but his eyes up, looking forward to the future—and now inspires his clothing company, Head Down Eyes Up.)

After college, Rice was selected as a NASCAR pit crew member, winning two championships with the Lowes teams, and then took time away to escape. But his heart never left music, and he knew he had to take his shot at Nashville. Soon after arriving, he was part of the team that wrote Florida Georgia Line’ s smash “Cruise,” which went on to be certified Platinum with over 10 million in sales. After a couple of independent album releases of his own, Rice signed a major label deal.

It was the peak moment for country songs about girls, trucks, and parties, and the Ignite the Night album spun off several hit singles, including the platinum “Ready Set Roll” and gold “Gonna Wanna Tonight.” Rice still feels connected to this work. “I can still completely relate to those songs,” he says. “I’m still proud of that record. It got people to come to the shows, put me on a farm I otherwise would never have, and made me into the artist I am today.”

He points to the song “Carolina Can” as a breakthrough for him personally with his writing. “It’s rare to have a song that’s so truthful,” he says. “The title is one state, one place—it tells my story—but anybody can relate to feeling and sentiment. It’s just a huge honor to have a song like that in our arsenal when we take the stage.” It would be a turning point not just in his songwriting, but in his goals and ambitions.

After one frustrating conversation with an executive, Rice went home, called his team, and informed them that he wanted out of his deal. “The more shows I kept playing, the more I learned that what I really needed was to get a record out!,” he says. “So I put my foot down and when I found that label didn’t have the same plan as I did, I just said, ‘let’s go our separate ways’—and I have zero problem with that. I was confident about that decision, and I believed in the album I was making. Looking back at that period I realize now that it was really about me needing to bet on myself before expecting others to do that as well.”

One song he believed in was “Three Chords & the Truth,” a tribute to the power of discovering the songs—“Amazing Grace,” “Sweet Home Alabama,” “Mama Tried,”—that changed his life. “I had actually wanted that to be the next single after ‘Gonna Wanna Tonight,’” he says. “It’s personal as it details going back to high school and what it meant to me to hear those songs for the first time.”

He kept writing for an album that he hoped would be out more than a year ago. “It was a long, long process,” he says. “But some of my favorite songs wouldn’t have been on here if I hadn’t kept going. It didn’t change completely, but it gave me time to analyze and make the songs better.”
Enter Broken Bow Records, home of Jason Aldean and Dustin Lynch, which decided to give Rice and Lambs & Lions a chance. “I had all these songs, and I knew I wanted to tell a story, but I wasn’t sure what that was,” says Rice. “I wanted each song to have its own identity, and it would fill the album with what it needed.”

But he felt sure that a song called “Lions” would be the title track. “I wanted to write something you would listen to in the locker room before you go out and crush it on the football field,” he says. “It means even more to me now because I had to weather a lot of storms, fight for my career—and see how much it motivates me.”

Elsewhere, Lambs & Lions draws on pop (the irresistible hooks of “Eyes on You”), rock, even old-school country sounds, ending with Rice’s version of iconic singer and rodeo champion Chris LeDoux's "This Cowboy's Hat," performed with LeDoux's son Ned. “The lines between genres are getting thinner and thinner—that’s the world we live in,” he says. “So I decided even more not to pander to what anybody wants me to do. The only way to make it successful is to make it true to me.”

Chase Rice points to a number of other artists as inspirations—Chesney, Garth Brooks, Bruce Springsteen, Blink 182 to the Foo Fighters. But he says that he holds no single musician as a role model. “Every artist needs to figure out their own way,” he says. “There are so many right ways to do it. The best way is just to be yourself and be good to people. I think you do that and you’ll be alright.”

Lambs & Lions is out now on Broken Bow Records/BMG.
www.chasericemusic.com