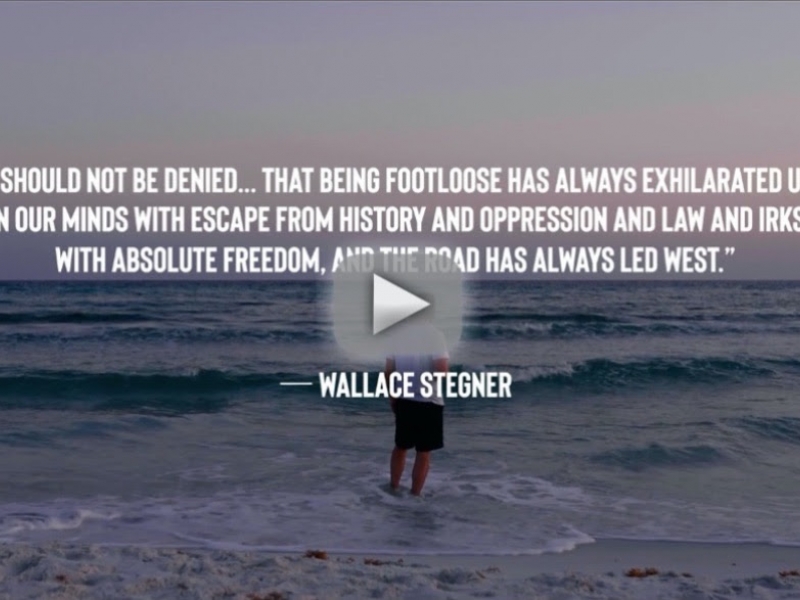 “This song is really a story about a man trying to figure his life out – trying to figure out his past, trying to figure out his situation with the woman that was in his life that he lost, and the trip that he took to help him along that journey,” reflects the man praised by American Songwriter as “one of  country music’s most intriguing and lasting acts.” “That’s what this video represents, and it shows me on my own trip across the country. There are no performance scenes because I didn’t want it to be about that. I wanted it to be about my journey for something that I just needed to do.”

Filmed over nine days with just director / producer / videographer Kaiser Cunningham joining him on the excursion, the video chronicles Rice’s trip pulling an Airstream behind his Chevrolet truck; beginning on the beaches Florida where he wrote the song with childhood friend and frequent collaborator Brian Kelley along with John Byron, Blake Pendergrass, Corey Crowder and Hunter Phelps.

The video also contains subtle Easter eggs alluding to elements of Rice’s forthcoming album, with Country Now noting that he “sets the bar high” with this first glimpse at what’s to come. The full project was recorded during a two-week period with producer Oscar Charles and a live band at Rice’s farm outside Nashville, using makeshift recording environment and no click track to capture a pure, raw sound unlike any of his previous studio projects.

“I'm at the place in my life now where I just want people to know who I really am as opposed to who they think I am,” Rice admitted to PopCulture recently. “I think this record's a good start."

“Key West & Colorado” Lyrics Available HERE
About Chase Rice
With more than 2.3 million albums sold and over 2.3 billion total streams, plus a legion of passionate fans at his high-energy concerts across the globe, Chase Rice has established himself as a powerful force in Nashville and beyond. With a forthcoming album crafted in his rural Tennessee home-turned-studio, his sound continues to evolve to reflect the realities of his life, as evidenced by recent single “If I Were Rock & Roll” and his latest release, “Key West & Colorado.” The new music serves as a follow up to his three-part project, The Album, featuring his latest Platinum-certified No. 1 hit, “Drinkin’ Beer. Talkin’ God. Amen. (feat. Florida Georgia Line)” and Platinum-certified Top 10 hit “Lonely If You Are.”

This is the same gravelly-voiced Chase Rice fans first fell in love with years ago – but better. Freer. Unbeholden and uninhibited, somehow capable of evoking Chris LeDoux and The Chronic, campfire singalongs and stadium anthems, all at once. The new music builds upon the success of his sophomore album, Lambs & Lions, which featured the Triple-Platinum, two-week chart topper “Eyes On You” – Rice’s first No. 1 as an artist and the most-streamed song of his career. Lambs & Lions followed Ignite the Night, which debuted at No. 1 on Billboard’s Top Country Albums and No. 3 on the all-genre chart, producing a pair of Top 5 hits; “Gonna Wanna Tonight” and Platinum-certified “Ready Set Roll.”