IN CASE YOU MISSED IT: SCOTTY McCREERY APPEARED ON "FOX & FRIENDS" ON WEDNESDAY, MAY 4, TO TALK ABOUT THE RELEASE OF HIS FIRST BOOK 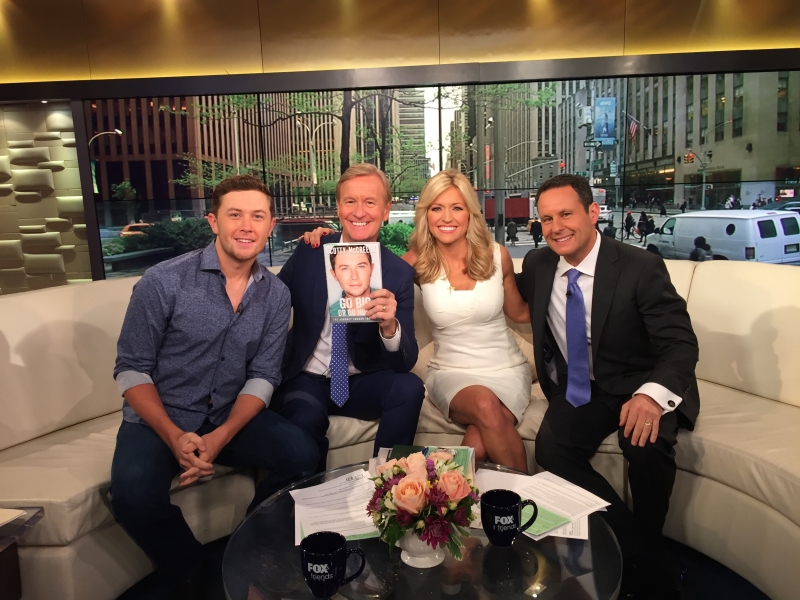 Wednesday, May 4, 2016 - 11:15pm
Related Client:
Scotty McCreery
NEW YORK, NY — (May 4, 2016) — Country singer Scotty McCreery returned to "FOX & Friends" this morning to talk about yesterday's release of his first book, Go Big Or Go Home: The Journey Toward The Dream, which is now available in bookstores everywhere. McCreery talked with hosts Steve Doocy, Ainsley Earhardt, and Brian Kilmeade about writing the book. When Earhardt read a line from the book where McCreery discussed meeting journalists such as Doocy and former "FOX & Friends" anchor Elisabeth Hasselbeck but not Kilmeade or herself, Kilmeade stormed off the set in mock anger. You can watch the interview here.
In the midst of his first book tour, the multi-Platinum-selling singer also created his first public Snapchat. Fans can follow McCreery on the social media platform under his username "ScottyMcCsnap."

McCreery continued his 14 city book tour today with stops at the Barnes & Noble NYC/Citigroup Center in Manhattan and the Barnes & Noble Country Glen Center in Carle Place, New York. Both stores were filled with screaming fans waiting in line to see the ACM and CMT Award winner.  Some fans had waited in line for five hours before the book signings began while other fans drove more than four hours to be able to meet the man voted the "Best American Idol" by the readers of The Los Angeles Times and have him sign their book.

The next stop on McCreery's Go Big or Go Home: The Journey Toward the Dream book tour is Friday, May 6, at the Mall of America in Minneapolis, Minnesota from 3:00-5:00 PM. The signing will take place in The Rotunda/Event Common Space. For more details on the signing, click here. For the additional cities on McCreery's book tour, visit www.scottymccreery.com/tour for dates, cities and times.
# # #
Press Contact: