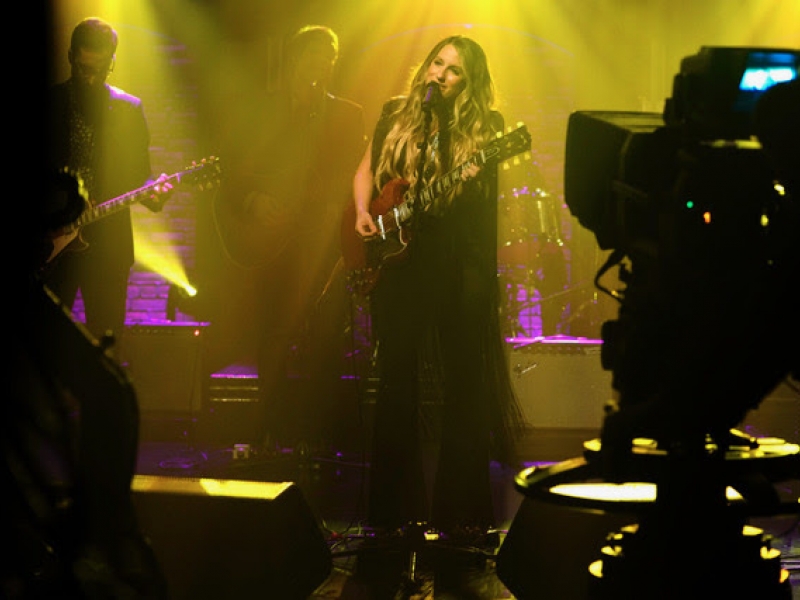 NEW YORK, Ny. – Acclaimed singer/songwriter and Monument Recording Artist Caitlyn Smith returned to late night television last night with a performance of “Before You Called Me Baby” on “Late Night with Seth Meyers” from her album Starfire released earlier this year.

The episode aired just hours after the singer/songwriter received some unexpected praise from four-time GRAMMY winner and multi-platinum recording artist Ed Sheeran. The global superstar posted a screen grab of Smith’s song “This Town is Killing Me” with a simple caption… “Wow.”

“Wow is right,” Smith shares. “It was so incredible performing on ‘Seth Meyers’ for the first time and I’m still losing my mind over the post from Ed Sheeran! ‘This Town is Killing Me’ is about the struggles and ‘no’s’ you can hear chasing a dream. The irony that such a rock star like Ed Sheeran chose that song to share is not lost on me.” She continues, “I am so thankful to everyone who listens to and shares the music and am so looking forward to kicking off the tour with Amos Lee tonight.”

Smith can also be seen in TIME Magazine’s latest issue on newsstands today. TIME traveled the country this summer to meet women where they gather to find strength and inspiration as part of their “Women Across America” series. Smith is featured along with friends Heather Morgan and Mags Duvall highlighting their seasonal concert series “Girls of Nashville” which the trio created to showcase women in music.

In May Smith wrapped her first-ever headlining Starfire Tour before hitting the road this summer with Grammy® Award winning superstars Tim McGraw and Faith Hill on their Soul2Soul Tour and Sheryl Crow opening on select dates. Tonight at New York’s Beacon Theatre, she will join Amos Lee as opening act for her first of ten dates on his fall tour.

Smith’s second single from Starfire, “Contact High,” is at Triple A Radio now.

The Cannon Falls, Minnesota-native cut her teeth in the clubs of Minnesota’s Twin Cities where she discovered her love for songwriting and performing. That passion led her to Music City and years spent writing for other artists including James Bay, Garth Brooks, Dolly Parton, John Legend and Meghan Trainor, before finding her own voice and expressing what she wanted to say as an artist in her own right. Rolling Stone(print) opined, “Her voice is as big and versatile as any of the Nashville stars she’s worked with.”

Starfire received wide critical acclaim with New York Times' Jon Pareles tapping the album as the first full body of work for the coveted Critic's Pick, describing her voice as “lean and taut, with an insistent quaver and a hint of a sob, with glimmers of both the girl-next-door naturalism of Sheryl Crow and the wayward attack of Sia."

Starfire is available everywhere now: http://smarturl.it/starfire. Fans can also purchase the deluxe edition vinyl of Starfire,online at Smith’s webstore or at Amazon.