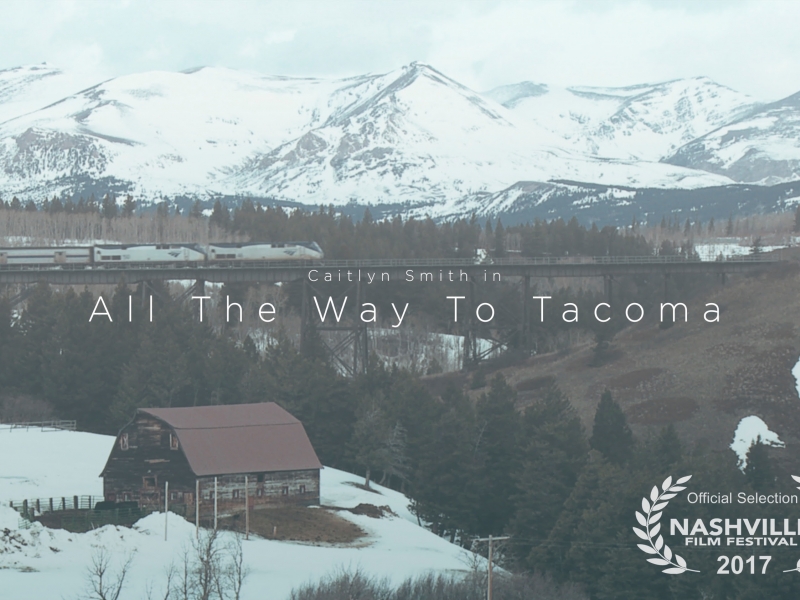 NASHVILLE, Tenn.  – Singer-songwriter Caitlyn Smith debuts All the Way to Tacoma, a documentary which follows her 3,000-mile train trip from Memphis to Tacoma, during the Nashville Film Festival Friday, April 21 (8:30 PM/CT) and Tuesday, April 25 (8:30 PM/CT).

Shot last spring by director/cinematographer Justin Key the documentary follows Smith on a cross-country trip on an Amtrak train joined by fellow Nashville-based writers Ruston Kelly, Bob DiPiero, Paul Moak whose work has appeared on numerous Platinum and Gold albums and been featured on hit T.V. shows such as, “Nashville,” “One Tree Hill” and “Pretty Little Liars” and Rollie Gaalswyk.

“Working with Caitlyn on this project was an incredible moment in my life,” said Key, who edited the documentary and produced the work with Shea Fowler. “Piecing together this film can only scratch the surface of how amazingly talented she is.”

The inspiration for the trip stemmed from a song Smith co-wrote that was that would ultimately appear on her critically acclaimed 2016 five-song release Starfire, called “Tacoma.” It was a song title inspired by the day she had her first write with DiPiero.

“I was trying to come up with something on the way to [the writing session], and I had never written with Bob before,” Smith said of how the song came to be. “I put in the address of his office, and my Google Maps took me to Tacoma, Washington. I saw the word Tacoma and I thought, ‘Man, that’s such a great song title. I just love that idea: how you hurt so badly you drive as far as you can to try to take your mind off the pain.'”

She walked in having never met the Hall of Fame Songwriter who has 15 No. 1 songs to his credit, but she knew what she wanted to write about.

That single word sparked a melody. “It just fell out of the air,” said Smith. “When I got to the write I said, ‘Bob, what do you think about this?’ And we started singing and wrote the song so quickly. It was the first time we had ever written [together], and it is one of my favorite songs that I’ve ever been a part of.”

That’s saying something when you consider that Smith’s catalog of songs includes cuts by such high-profile artists as Meghan Trainor (“Like I’m Gonna Lose You”).

Smith and the cast of accomplished Nashville tunesmiths composed songs and stories written over the course of the 3,000-mile Amtrak journey that started in Memphis and passed through Chicago and Seattle before ending in Tacoma, known as the “City of Destiny” as the area was chosen to be the western end of the Northern Pacific Railroad. The excursion ended up revealing a woman on the verge of musical and personal discovery as she prepares to release her full-length debut album on Monument Records.

To learn more about All the Way to Tacoma and purchase tickets visit here.

About Justin Key
A native Nashvillian, Key is originally a photographer by trade and the former Creative Director for Taylor Swift and various other country music artists. After spending eight years overseeing the creative for Swift and Big Machine Records he opened his own production house and content agency situated just south of downtown. His current roster of work includes music videos from every major record label as well as commercial series for various trade organizations and clients.

His first project at the helm of Wilder Media was an independent documentary film entitled North of Everything. The film was a personal journey across Iceland speaking with strangers and developing lasting friendships through a unique travelogue.

His current project All the Way to Tacoma allowed him to dive deep into the Nashville tradition of songwriting and tell a the story of one deeply rooted songwriter in Caitlyn Smith.