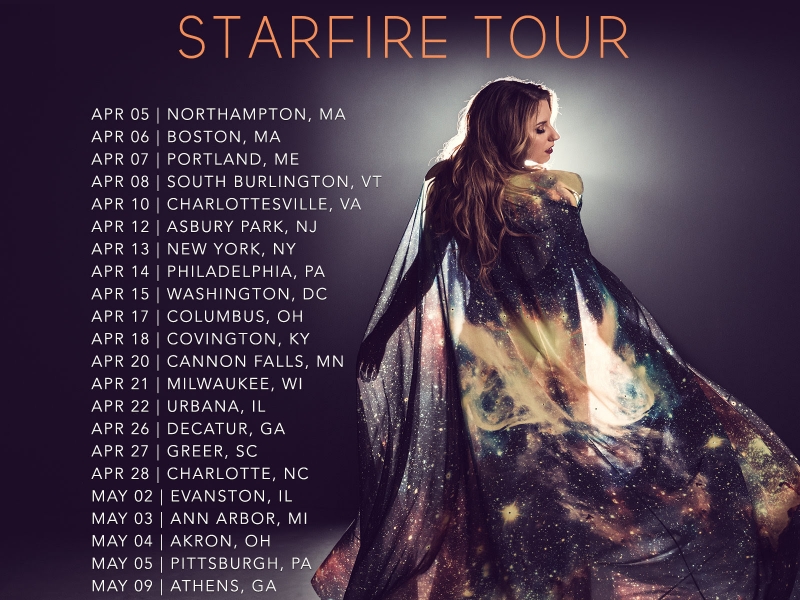 Singer/songwriter Caitlyn Smith burst into 2018 thanks in large part to her critically acclaimed debut album, Starfire, released in January. Getting her start writing pop hits for the likes of Meghan Trainor, John Legend and James Bay, the Minnesota-native’s first album landed her on The Tonight Show Starring Jimmy Fallon, the TODAY show and in a CBS This Morningprofile on Friday, February 23. Now, Smith will conquer another first this year: her headlining, aptly-named Starfire Tour this spring. The Starfire Tour will begin April 5 at Northampton, Massachusetts’s Iron Horse Music Hall and will end May 10 at Nashville, Tennessee’s Mercy Lounge.

Tickets for the Starfire Tour will go on sale to the general public on Friday, February, 23 at 10:00 a.m. local time at CaitlynSmith.com.

“This year has been a such a whirlwind for us – my family, the band, our touring gypsy family—in the most incredible way,” said the woman The New York Times’ Jon Pareles calls “format-defying” with a “striking voice.” “I keep reminding myself to live in the moment and really take all these firsts in… the fact that the fans have responded the way they have that we can visit this many cities and states is just incredible. I can’t wait to bring the music to them!”

Smith will also make her “Live from Here with Chris Thile” premiere on March 3 in her home state, at the Fitzgerald Theater.

“We played a show the other night, and I had to step back from the microphone as the fans were singing the words to ‘St. Paul,’ and that sound and visual actually took my breath away,” says the woman Rolling Stone declares channels “James Brown by way of Janis Joplin.” “It will be incredible to play Nashville’s Mercy Lounge, New York’s Mercury Lounge and my hometown -- Cannon Falls, Minnesota’s Cannon Falls Auditorium -- as all three cities contributed to the characters and the sounds on this record.”

Saturday, May 5 – The Club at Stage AE, Pittsburgh, Pennsylvania

Smith has been widely recognized by critics with New York Times' Jon Pareles tapping the album as the first full body of work for the coveted Critic's Pick, describing her voice as “lean and taut, with an insistent quaver and a hint of a sob, with glimmers of both the girl-next-door naturalism of Sheryl Crow and the wayward attack of Sia." Rolling Stone said the “powerhouse vocalist” has “emerged as next-level star on new album ‘Starfire,’” the “equal-parts gritty and gorgeous debut LP” that “veers between classic country (‘Tacoma’), pop (‘Don't Give Up on My Love’), blues (‘Contact High’) and gut-wrenching soul (‘East Side Restaurant’).” Paste also recognized the singer’s talent saying Starfire is a “stinging, superb debut album” where “‘Don’t Give Up On My Love’ swells with the dramatics of an Adele hit, and her ode to her old hometown of ‘St. Paul’ could slot right between Sam Smith and Khalid on a Top 40 playlist.”