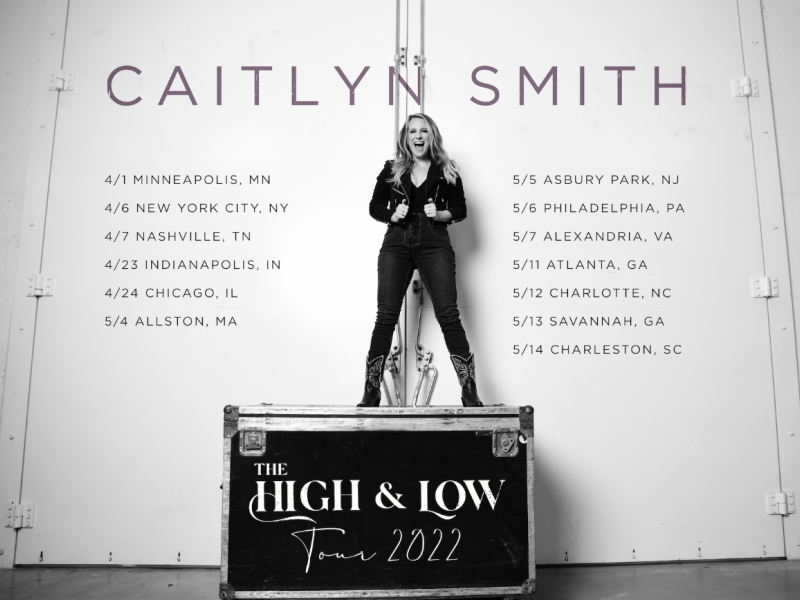 NASHVILLE, Tenn. – Powerhouse vocalist and country music singer/songwriter Caitlyn Smith announces her headlining tour, The High & Low Tour 2022. Kicking off in Smith’s hometown of Minneapolis, Minn. on April 1, the tour will hit 13 cities, including a show at Brooklyn Bowl in Nashville.

“I can’t think of a better place to kick off this tour than my home state of Minnesota,” shares Smith. “We were supposed to tour with my last record but were unable to due to the pandemic. Needless to say, I’m beyond thrilled to see all your faces on the road and finally be able to play Supernova live. I’m also very excited to share a taste of the new music I’ve been working on the last year, too!”

Tickets are on sale February 11 at https://www.caitlynsmith.com/.
Smith spent the last year opening for George Strait, Reba, Little Big Town, and Old Dominion where she played stadiums and arenas across the country. In March, she will head overseas to perform as part of C2C in London before she hits the road to headline her own tour.

The High & Low Tour comes on the heels of Smith’s recent release “High,” about which BBC Radio 2’s Bob Harris raved “It’s big and it’s dramatic and it is absolutely fantastic. I love this record” and MusicRow stated, “this single confirms the widely admired songwriter’s status as a first-rate record maker.” Written by Smith along with Miley Cyrus and Jennifer Erin Decilveo, “High” was originally released by Cyrus on her album Plastic Hearts.

Along with the release of “High,” Smith revealed that she will be self-producing her next album, arriving later this year.

“Self-producing has taught me so much about trusting my own compass,” shares Smith. “In the past, I’ve been guilty of looking for direction from everyone else. That’s why I decided to choose my own adventure. It has been a beautifully terrifying experience and has added a layer of vulnerability when you’re also responsible for painting the sonic landscape as an artist, in addition to writing and singing the songs.”