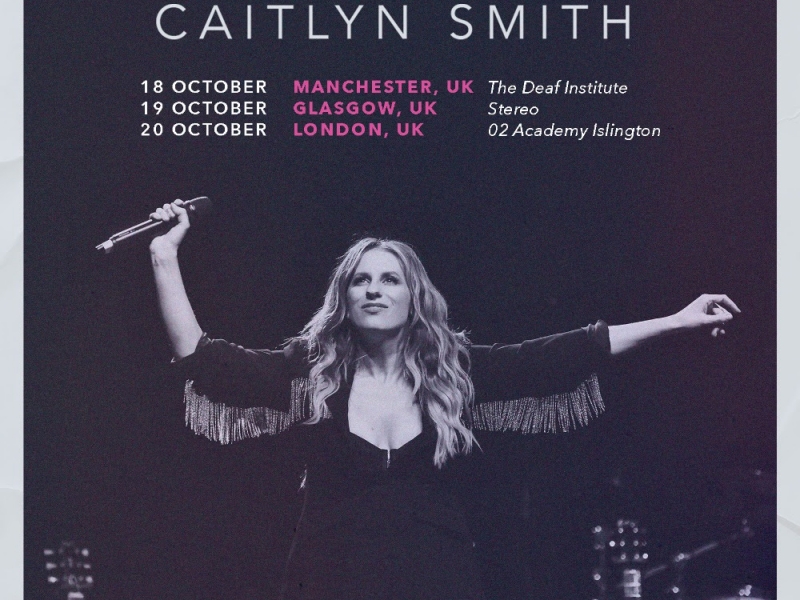 Tickets for the Headlining Trek On Sale Today

“It’s big and it’s dramatic and it is absolutely fantastic. I love this record.”
– “The Country Show with Bob Harris” on BBC Radio 2

NASHVILLE, Tenn. – Powerhouse vocalist and acclaimed country music singer/songwriter Caitlyn Smith announced today a run of headlining shows in the U.K. kicking off in Manchester on 18 Oct with additional stops in Glasgow and London. Tickets go on sale today at caitlynsmith.com.

The Pollstar “Hotstar” just wrapped her 14-date High & Low Tour 2022. Prior to the headlining run across the U.S., Smith spent the last year opening for George Strait, Reba, Little Big Town and Old Dominion where she played stadiums and arenas across the U.S. In March she made her debut appearance at this year’s C2C: Country to Country and left Lyric Magazine declaring she “was THE artist of the festival.”

“We had the best time at C2C earlier this year,” shares Smith. “I’m thrilled to go back to the UK now that new music from High is out. It was such a labor of love, born out of a really tough two years for all of us. I’m excited for us to all be in our feels together and share the new music live!”

The news of headlining U.K. dates comes on the heels of the release of Smith’s new 7-song project High. BBC Radio 2’s Bob Harris was the first to share the title track in March and raved, “It’s big and it’s dramatic and it is absolutely fantastic. I love this record” while MusicRow Magazine stated, “this single confirms the widely admired songwriter’s status as a first-rate record maker.”

The Monument Records recording artist ventured into the unknown and expanded her own artistry with the self-produced High, praised by NPR as “her most fully realized project yet.” The album was a new and creative stretch for Smith who spent her early years in Music City as a songwriter earning what the Tennessean calls “enviable career credits” with superstars like Miley Cyrus, Dolly Parton and more cutting her songs. Like her debut Starfire (2018) and sophomore Supernova (2020), High is filled with the same stellar writing chops and soaring vocals that earned her both critical praise and diehard fans, but this time the woman Billboard calls “one of Nashville’s most versatile creatives” is in control behind the board too.

About Caitlyn Smith
After winning a Critics Choice Award, earning a nomination for ACM New Female Artist of the Year and writing songs for the likes of Miley Cyrus, Dolly Parton, Meghan Trainor and John Legend, Garth Brooks, Caitlyn Smith has established herself as one of Nashville’s brightest rising stars. Undeniably one of the best vocalists of this generation, Smith’s 2018 Starfire and 2020’s Supernova saw her in the pages of TIME Magazine and The New York Times, and had her named to Rolling Stone’s 10 country artists to know and Paste’s 10 country artists to watch. Smith’s self-produced High, was released this April on Monument Records.