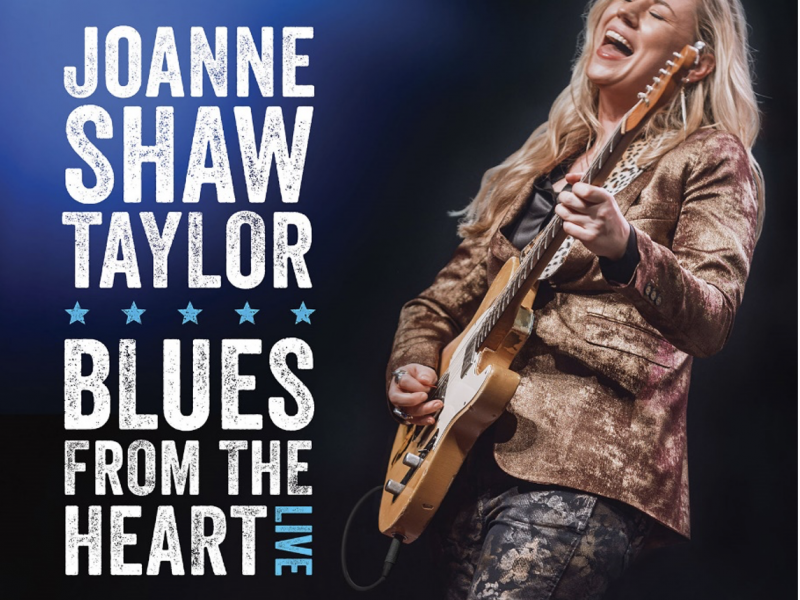 NASHVILLE, Tenn. – KTBA Records is proud to announce blues-rock star Joanne Shaw Taylor’s first live U.S. concert film Blues From The Heart Live releasing on June 10, 2022. The live performance will be available as a CD/DVD and CD/Blu-Ray package and will include a collectible 24-page CD booklet. Pre-order now at https://bit.ly/JSTblues.

“It was a dream gig,” recalls Taylor. The live concert was recorded and filmed at The Franklin Theatre in Franklin, Tennessee on January 20, 2022, and features incredible guest performances from Kenny Wayne Shepherd, Mike Farris, and Joe Bonamassa. Public TV stations around the country have been airing a shortened version of the film for their pledge events since March to their audiences.

The first live single, “Dyin’ To Know” released today is available to stream now. Watch the official music video for “Dyin To Know” on YouTube HERE.

All Access Pass – Behind The Scenes
Bonus Track: I’m No Angel

Still only in her 30’s, she has become one of the most sought-after guitarists in the world of rock. She released her first album on Ruf Records entitled White Sugar (2009), unleashing her distinct soulful voice on the world, and demonstrating a song writing prowess way beyond her years - the world of blues rock had a new star! Over the next few years, she released critically acclaimed albums including her sophomore album Diamonds In The Dirt (2010), Almost Always Never (2012) which featured the UK radio hit “Soul Station,” plus her final album for Ruf Records - the live album Songs From The Road (2013).

In 2014 she released her fourth studio album The Dirty Truth on Axehouse Records that featured the singles “Mud, Honey” and “Wicked Soul”. In 2016, Joanne followed up with the release of her fifth album Wild (Produced by Kevin Shirley) which saw her perform songs “Dyin’ To Know” and “Summertime” on BBC Two Television’s popular music show “Later With Jools Holland.” Three years later, in 2019 she signed to Silvertone Records via Sony Music and released her sixth studio album, Reckless Heart.

Over the past two decades, Joanne has proven herself as a prolific songwriter, releasing seven acclaimed albums under her belt, each increasingly more successful with her 2019 Reckless Heart breaking into the UK Top 20 Album Chart and cementing herself as one of the most important exports in British blues-rock.