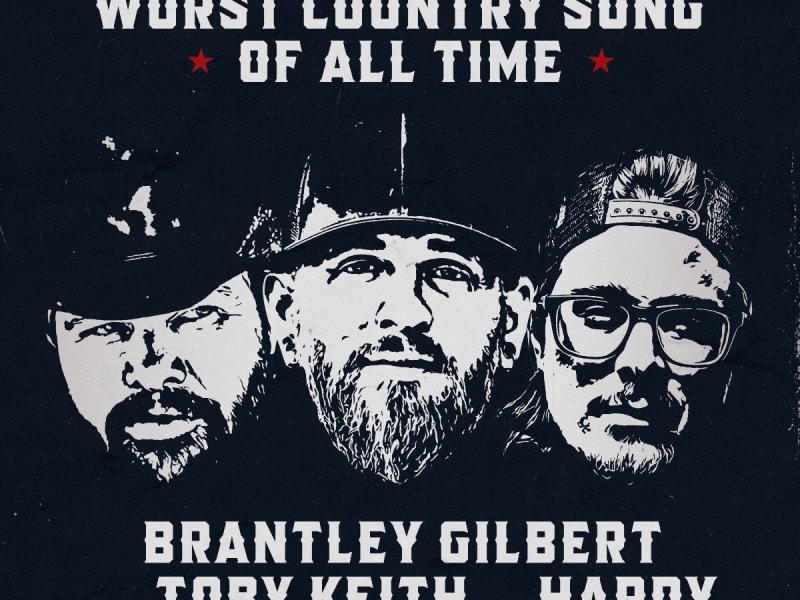 Celebrated by The Washington Post for his “deafening country rock that has earned him a loyal fanbase,” truth-teller Brantley Gilbert took to social media with his friends turned collaborators Toby Keith and HARDY for the first taste of “The Worst Country Song Of All Time” – the Georgia-native’s highly-anticipated new single, ready for release on Friday, June 18, via The Valory Music Co. Pre-save the song, which will impact Country Radio on Monday, June 21, HERE.

Last month, Brantley Gilbert asked BG Nation a burning question on TikTok: “What is the worst country song of all time?” With nearly 500K views, over 7,500 opinionated fans left their thoughts in the comments, with the debate making its way into a writer’s room containing Gilbert, HARDY, Hunter Phelps and Will Weatherly.

“HARDY threw the idea on the table, and he said, ‘Guys, I know this is crazy, but I had a title I put down in my phone: ‘The Worst Country Song Of All Time,’” Gilbert elaborates. “We all laughed it off because obviously it was a joke. Then we all were throwing out lines we thought were funny. The next thing you know, we’ve got this song written, and the rest is history in the making.”

And the chorus goes
I love cities and traffic jams
I don’t want a house on a piece of land
I deserve a bunch of money and a minivan
But I don’t wanna earn a dime
Old Yeller didn’t make me sad
I think we should change the American flag, yeah
This is the worst country song of all time

“We were listening to the demo after we finished it, and I said to HARDY, ‘Man, if we get a wild hair and decide we’re actually going to cut this, would you be cool with cutting it with me?,’” Gilbert shares of his co-writer. “I’ll never forget, he looked at me and he said, ‘Absolutely.’

“As far as Toby goes – it’s freakin’ Toby Keith!” Gilbert praises of the hitmaker. “He’s written some of the best and put out some of my favorite country songs of all time. So having him on it is kind of like that final seal of approval.”

With seven No. 1’s under his belt, Gilbert has been back at it, writing and recording during his time off from the road, readying his fans for more new music later this year.

“We’ve had a lot of great writes over the last few months,” Gilbert says. “We got outside of our box a little bit. As artists and writers, we have a group of people that we’re extremely comfortable writing with, that we know we’re going to be productive with and we know what kind of song we’re going write. But we branched out a little bit and wrote with some folks we haven’t written with before, just to see what would happen and what would come out of it. I have to say, I’m extremely proud of what we got on the way,” he concludes.

“The Worst Country Song Of All Time” follows the release of Fire & Brimstone (Deluxe Edition), an extended version of his fifth studio album which explores love and family, redemption and life in a small town, with all 17 tracks written or co-written by Gilbert. Lead single “What Happens In A Small Town” featuring Lindsay Ell marked his fifth No. 1 as an artist, seventh No. 1 as a songwriter and earned nominations for the 2019 CMA Award for Musical Event of the Year and 2020 ACM Award for Music Event of the Year.

About Brantley Gilbert
With back-to-back Platinum albums and a grassroots following millions strong, Brantley Gilbert’s music has been shared, covered and adopted as the soundtrack to Saturday night and Sunday morning by audiences around the world. The Georgia native who started as the defiant life-of-the-party can still go ‘til sunrise, but he’s also emerged as something far greater: the leader of a massive tribe of hard-working, fun-loving believers for whom electric guitar-shredding, rapping, and twang can go hand-in-hand-in-hand. They call themselves the BG Nation, and when the BG Nation watches Gilbert on a stage, they don’t just see a star. They see themselves. Seven No. 1 hits punctuate his career: “Country Must be Country Wide,” “You Don’t Know Her Like I Do,” CMA Awards Song of the Year nominee “Dirt Road Anthem,” “My Kinda Party,” RIAA 5x Platinum-certified “Bottoms Up,” “One Hell of an Amen” and collaboration with Lindsay Ell “What Happens In A Small Town.” Gilbert’s landmark record Just As I Am clinched the 2014 American Music Award for Favorite Country Album. Earning praise from the New York Times, NPR, American Songwriter, and more, Gilbert has mined a rich vein of conflict between the party and the pew on all of his albums. Instead of toiling in limbo, unable to enjoy good times for fear of Judgment Day, Gilbert fully lives––rowdy friend, man of faith, devoted husband, smitten new father––just as he is. His latest single “The Worst Country Song Of All Time” featuring Toby Keith and HARDY will be available everywhere Friday, June 18 and impacting radio Monday, June 21. For additional information, visit BrantleyGilbert.com or follow him on Instagram and Twitter @BrantleyGilbert and on Facebook @BrantleyGilbertMusic.

About Toby Keith
The familiar maxim of the triple threat – singer, songwriter, musician – doesn't begin to cover it for Toby Keith, one of the modern era's most complete self-directed hit makers. And Keith's most recent years are a remarkably accurate representation of his entire career. In 2021, he was bestowed the National Medal of Arts to honor his artistic achievements and contributions to the arts and culture of America. In 2018, he celebrated the 25th anniversary of his debut No. 1 single, “Should’ve Been A Cowboy” with the re-release of his debut album (remastered with the addition of three vault tracks). From the moment that song was released and shot up the charts to become his first No. 1, the engine driving everything has been the music. He writes it. He arranges and produces it. At the core is his songwriting, as recognized in his 2015 induction into the Songwriters Hall Of Fame in New York City. Also in 2018, Keith released a new song, “Don’t Let The Old Man In,” which was inspired by a conversation he had with Clint Eastwood and was later featured in Eastwood’s movie, “The Mule.” Keith's albums have sold more than 40 million copies. His tours have drawn more than a million fans each year for more than a decade straight, with recent expansion into Europe and Australia. The awards are too numerous to count and include Artist of the Decade nods from Billboard and the American Country Awards, three-time BMI Country Songwriter/Artist of the Year, as well as the ACM's Career Achievement honor, Poet’s Award recipient, and twice their Entertainer of the Year award winner in back-to-back years. His 11 USO Tours to date have enhanced the lives of nearly 256,000 troops and military families in 18 countries with more than 285 events, and have been recognized with the Spirit of the USO Award (2014). And when a tornado ravaged his hometown, Toby Keith was the face of the community and helped shoulder the cleanup with the 2013 OK Twister Relief Concert. Triple threat? How about singer, songwriter, musician, producer, entertainer, humanitarian, Oklahoman and patriot.

About HARDY
Big Loud Records’ booming upstart HARDY broke new ground in 2020 with acclaimed debut album, A ROCK, “an album that owes as much to AC/DC as George Jones” and “one of the most self-assured full-length debut albums in years” (Billboard). The project follows 2019’s countrified mixtape HiXTAPE VOL. 1, and career-launching EPs THIS OLE BOY and WHERE TO FIND ME. Nominated for three 2021 ACM Awards, one of CRS’ 2021 New Faces of Country Music, a CMA Triple Play award recipient and a Vevo DSCVR artist, the pride of Philadelphia, MS has earned his reputation as "Nashville's most clever new redneck songwriter" (Rolling Stone). The 2020 AIMP Songwriter of the Year has co-penned EIGHT #1 singles since 2018: FGL’s 2X PLATINUM “Simple,” Chris Lane’s 2X PLATINUM “I Don’t Know About You,” Blake Shelton’s 3X PLATINUM “God’s Country," Morgan Wallen’s 2X PLATINUM “Up Down” and PLATINUM “More Than My Hometown,” LOCASH's GOLD "One Big Country Song," Jameson Rodgers’ GOLD “Some Girls,” and his own first-ever #1, PLATINUM “ONE BEER.” Current single “GIVE HEAVEN SOME HELL” is a hard-charged tribute to a fallen friend, making a statement as the most-added single of the week at Country radio upon launch. Set to serve as direct support on Jason Aldean’s upcoming BACK IN THE SADDLE TOUR this summer, HARDY has also shared the stage with FGL, Chris Lane, Thomas Rhett, Cole Swindell and more.