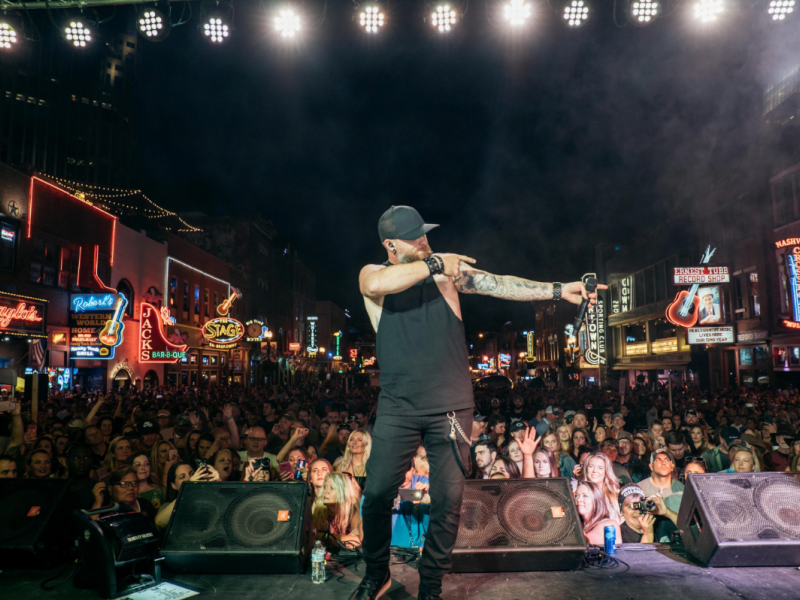 Platinum-selling recording artist Brantley Gilbert celebrated the release of his fifth studio album Fire & Brimstone, via The Valory Music Co., with a packed week of activity including stops at the iHeart Theater in New York for an intimate “iHeartCountry Album Release Party” with his fans, a fiery performance on Fox & Friends and headlined the Tootsies’ 59th Anniversary Birthday Bash in Music City.

He shows no signs of slowing down as he gears up for a Monday Night Football appearance Oct. 14, performing at Lambeau Field at the Detroit Lions vs. Green Bay Packers game that will air on ESPN during the Genesis-sponsored halftime show.

Hailed by NPR for performances that “pack a punch,” Gilbert gave Nashville a taste of Fire & Brimstone as he headlined Tootsies’ 59th Anniversary Birthday Bash on Oct. 9, opening with fan favorites “Kick It in the Sticks” and “Country Must Be Country Wide,” before peppering in new tracks “Fire’t Up” and “Bad Boy.”

The rowdy Broadway crowd was delighted as Gilbert introduced Lindsay Ell to perform current Top 10 and climbing single, “What Happens in a Small Town.”

Before performing “One Hell Of An Amen,” Gilbert dedicated it to veterans, service men and women and their families, as well as those fighting cancer: “Whether you’re a patient, a doctor or a nurse, a friend or a family member, we all like to think we go through it together.”

Earlier this week, Gilbert treated fans to an intimate performance and Q&A at the iHeartRadio Theater NY on Oct. 7 and followed it up with an explosive morning show appearance on Fox & Friends Oct. 8, performing lead track “Fire’t Up” from Fire & Brimstone.

Next month Gilbert will embark on his Second Annual Kick It in The Ship cruise Nov. 4-Nov. 8, before kicking off his Fire’t Up Tour 2020 Jan. 23, in London, Ontario. For dates and to purchase tickets, visit BrantleyGilbert.com.

About Brantley Gilbert
With back-to-back platinum albums and a grassroots following millions strong, Brantley Gilbert has clearly struck a nerve. The Georgia native who started as the defiant life-of-the-party can still go ‘til sunrise, but he’s also emerged as something far greater: the leader of a massive tribe of hard-working, fun-loving believers for whom electric guitar-shredding, rapping, and twang can go hand-in-hand-in-hand. They call themselves the BG Nation, and when the BG Nation watches Gilbert on a stage, they don’t just see a star. They see themselves. Six No. 1 hits punctuate his career: “Country Must be Country Wide,” “You Don’t Know Her Like I Do,” CMA Awards Song of the Year nominee “Dirt Road Anthem,” “My Kinda Party,” “Bottoms Up,” and “One Hell of an Amen.” Gilbert’s landmark record Just As I Am clinched the 2014 American Music Award for Favorite Country Album. Earning praise from the New York Times, NPR, American Songwriter, and more, Gilbert has mined a rich vein of conflict between the party and the pew on all of his albums. Instead of toiling in limbo, unable to enjoy good times for fear of Judgment Day, Gilbert fully lives––rowdy friend, man of faith, devoted husband, smitten new father––just as he is. Highly anticipated Fire & Brimstone, out now (10/4/19) via The Valory Music Co., is Gilbert’s most mature and complex exploration of his world to date. Following this fall’s Not Like Us Tour and his Second Annual Kick It in The Ship cruise, Gilbert embarks on his Fire’t Up Tour 2020 on January 23 in London, Canada with special guests Chase Rice, Dylan Scott and Brandon Lay. For additional information, visit BrantleyGilbert.com or follow him on Instagram and Twitter at @BrantleyGilbert and on Facebook @BrantleyGilbertMusic.