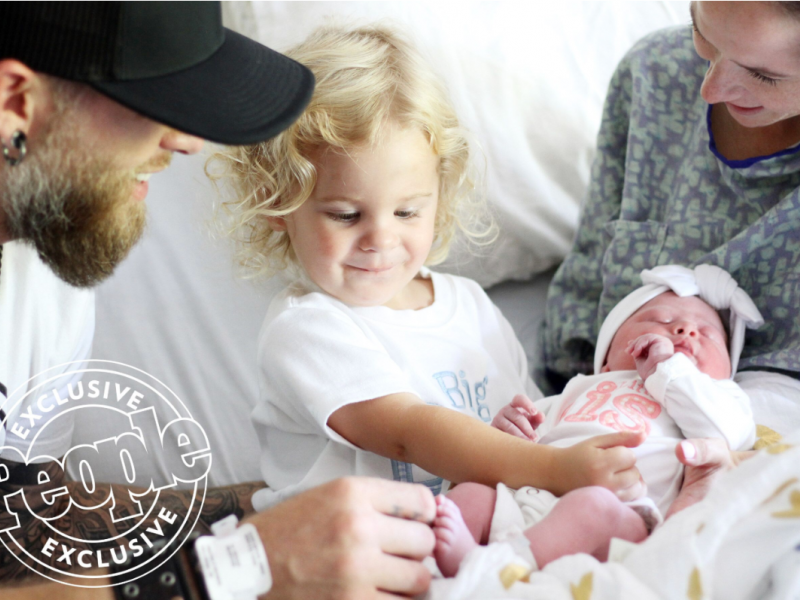 “It’s such a blessing for us to welcome Braylen and both momma and baby girl are doing great,” Gilbert shared with PEOPLE.com in an exclusive announcement.

The Gilberts revealed they were expecting their second child in March, sharing photos of their gender reveal featuring 16-month-old son Barrett Hardy-Clay. After the family of three pulled a string on a box above their heads, pink balloons, balls and confetti rained down on the soon-to-be family of four, letting them know a baby girl was on the way.

Gilbert, who refers to himself as a songwriter first, saw his most personal song to-date, “Man That Hung The Moon,” take on a whole new meaning upon welcoming a little girl into the world.

“We had just found out Amber was pregnant with Barrett when I wrote the song originally – we couldn’t even tell family yet as it was so early along in the pregnancy – yet I couldn’t keep that excitement bottled up. I had to do something as all these emotions were hitting me at once. I wrote ‘Man That Hung The Moon’ on the bus heading home thinking how life was about to change in the most incredible ways,” Gilbert reflects. “Braylen joining our family now makes it all that much more special.”

"Lost my breath when I saw you take your first / My whole world stopped like that / And I ain't the cryin' type / But I just saw your eyes / Words just can't describe what I see / You look just like me."

The track off his upcoming album Fire & Brimstone is his message to both Barrett and Braylen that their father will always be there for them, and ultimately, he hopes to instill in them that “the man that really hung the moon” will always be a place to find comfort and protection.

"And you'll need more than me / You'll know to hit your knees / If I've done my job right, you'll know where to find / The man that really hung the moon.”

About Brantley Gilbert
With back-to-back platinum albums and a grassroots following millions strong, Brantley Gilbert has clearly struck a nerve. The Georgia native who started as the defiant life-of-the-party can still go ‘til sunrise, but he’s also emerged as something far greater: the leader of a massive tribe of hard-working, fun-loving believers for whom electric guitar-shredding, rapping, and twang can go hand-in-hand-in-hand. They call themselves the BG Nation, and when the BG Nation watches Gilbert on a stage, they don’t just see a star. They see themselves. Six No. 1 hits punctuate his career: “Country Must be Country Wide,” “You Don’t Know Her Like I Do,” CMA Awards Song of the Year nominee “Dirt Road Anthem,” “My Kinda Party,” “Bottoms Up,” and “One Hell of an Amen.” Gilbert’s landmark record Just As I Am clinched the 2014 American Music Award for Favorite Country Album. Earning praise from the New York Times, NPR, American Songwriter, and more, Gilbert has mined a rich vein of conflict between the party and the pew on all of his albums. Instead of toiling in limbo, unable to enjoy good times for fear of Judgment Day, Gilbert fully lives––rowdy friend, man of faith, devoted husband, smitten new father––just as he is. Highly anticipated Fire & Brimstone, out October 4 via The Valory Music Co., is Gilbert’s most mature and complex exploration of his world to date. Following this fall’s Not Like Us Tour and his Second Annual Kick It in The Ship cruise, Gilbert embarks on his Fire’t Up Tour 2020 on January 23 in London, Canada with special guests Chase Rice, Dylan Scott and Brandon Lay. For additional information, visit BrantleyGilbert.com or follow him on Instagram and Twitter at @BrantleyGilbert and on Facebook @BrantleyGilbertMusic.