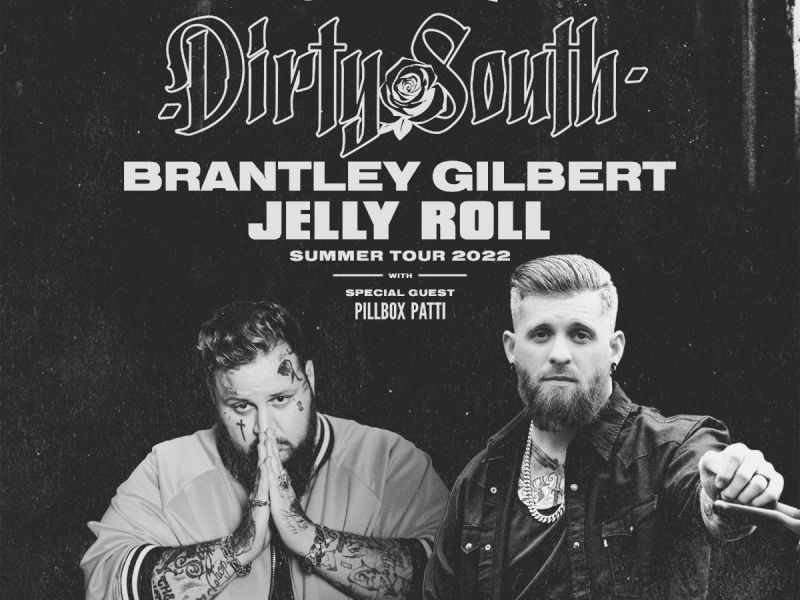 NASHVILLE, Tenn. – As multi-Platinum selling Country star Brantley Gilbert gears up for his two-night stand at Red Rocks Amphitheatre in Morrison, Colo. this weekend (Friday, May 6 and Saturday, May 7), the Georgia-native announces he will join forces with country rocker Jelly Roll for the Son of the Dirty South Summer Tour 2022, with special guest Pillbox Patti, kicking off June 30 in Jacksonville, Fla. Tickets for the tour go on sale this Friday, May 6 at 10am ET at BrantleyGilbert.com.

“I always look forward to being on the road and getting together with BG Nation, but I can say I’m especially excited to be heading out with my good friend Jelly Roll,” shares Gilbert. “We’ve got an incredible show in the works, and we’re looking forward to seeing you this summer!”

“Touring with Brantley has been on my dream list forever! He’s one of my favorite artists, humans and fathers in the business,” adds Jelly Roll. “I expect these shows to be rowdy!”

Gilbert’s recent release “Rolex® On A Redneck” marked the first collaboration with longtime friend Jason Aldean, having toured together and swapping songs throughout their careers. Written by Gilbert, Brock Berryhill, Michael Hardy, Randy Montana and Taylor Phillips, the song encompasses the hard-working and fun-loving attitude that both Gilbert and BG Nation possess. Along with “Rolex® On A Redneck,” penned while on a writer’s retreat in Texas, Gilbert has been preparing more new music to be delivered later this year.

With the release of 2021’s Ballads of the Broken, genre-bending singer/songwriter/rapper Jelly Roll saw his career soar to new heights, as lead single “Save Me” became RIAA Gold-certified and garnered over 100 million views on YouTube. This week, the Nashville native’s latest single “Son of a Sinner” broke into the top 30 on the Billboard Country Airplay chart.

About Brantley Gilbert
With back-to-back Platinum albums and a grassroots following millions strong, Brantley Gilbert’s music has been shared, covered and adopted as the soundtrack to Saturday night and Sunday morning by audiences around the world. The Georgia native who started as the defiant life-of-the-party can still go ‘til sunrise, but he’s also emerged as something far greater: the leader of a massive tribe of hard-working, fun-loving believers for whom electric guitar-shredding, rapping, and twang can go hand-in-hand-in-hand. They call themselves the BG Nation, and when the BG Nation watches Gilbert on a stage, they don’t just see a star. They see themselves. Seven No. 1 hits punctuate his career: “Country Must be Country Wide,” “You Don’t Know Her Like I Do,” CMA Awards Song of the Year nominee “Dirt Road Anthem,” “My Kinda Party,” RIAA 5x Platinum-certified “Bottoms Up,” “One Hell of an Amen” and collaboration with Lindsay Ell “What Happens In A Small Town.” Gilbert’s landmark record Just As I Am clinched the 2014 American Music Award for Favorite Country Album. Earning praise from the New York Times, NPR, American Songwriter, and more, Gilbert has mined a rich vein of conflict between the party and the pew on all of his albums. Instead of toiling in limbo, unable to enjoy good times for fear of Judgment Day, Gilbert fully lives––rowdy friend, man of faith, devoted husband, smitten new father––just as he is. His latest release “Rolex® On A Redneck” featuring Jason Aldean is available now via The Valory Music Co. For additional information, visit BrantleyGilbert.com or follow him on Instagram and Twitter @BrantleyGilbert and on Facebook @BrantleyGilbertMusic.

About Jelly Roll
Stoney Creek/BMG artist Jelly Roll independently built a legion of fans with his raw, rough-edge lyrics and “man of the people” charisma. With more than a billion collective streams to date, the genre-bending talent’s current single “Son of a Sinner” -originally released independently on his 2021 album Ballads Of the Broken- has garnered more than 6 million streams and debuted #38 on Billboard’s Country Music Chart ahead of its official release, earning Jelly a slot on Billboard’s all-genre Emerging Artist chart. A Nashville native, the singer/songwriter has critics noting  “his music takes those raw, unreserved verses and melds elements of country, rock, and hip-hop into his own signature style” (Billboard) and “with powerful tunes like ‘Son of a Sinner’ and ‘Sober’ it’s clear that when it comes to music, Jelly Roll’s heart is often right—singing with a profound amount of emotion and tact, the songs and their revealing lyrics soar to brilliantly uplifting heights, shining light onto some of life’s darkest circumstances” (American Songwriter). The multi-genre talent’s “Dead Man Walking” single is currently #4 on Billboard’s Mainstream Rock Chart and has over 10 million streams and counting.  “Son of A Sinner” and “Dead Man Walking” are the follow up singles to Jelly’s breakout hit, “Save Me,” the GOLD-certified single with more than 65 million YouTube views that ushered a new wave of musical growth for the multi-talented artist. Hailing from the Antioch neighborhood of Nashville, Jelly Roll sold recently sold out the iconic Ryman Auditorium and averages more than 200 shows a year. He is currently on the road headlining and on select dates with Shinedown and Brantley Gilbert.