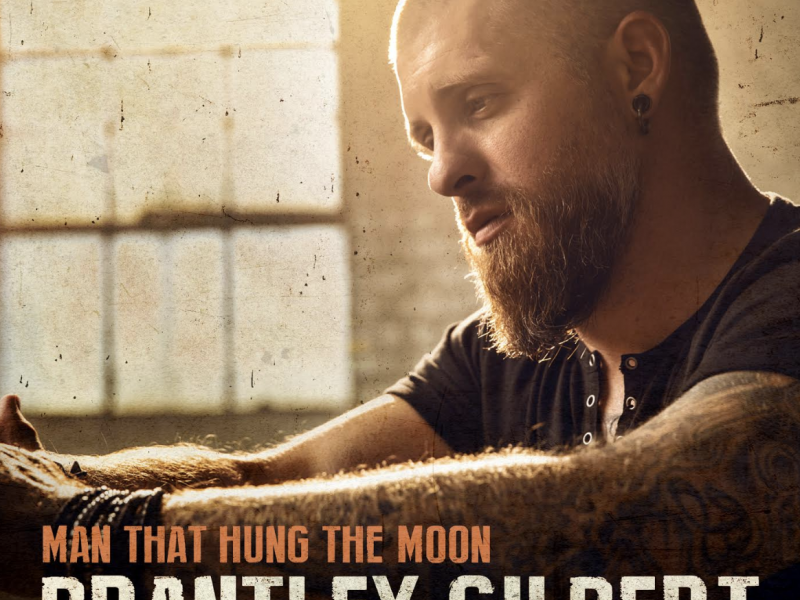 Maysville, Georgia – When Brantley Gilbert and wife Amber welcomed their son, Barrett Hardy-Clay, in 2017, the rough-around-the-edges singer/songwriter/rocker admittedly immediately softened. Once the family of three settled back in their home in Maysville, Georgia, the reality of consequences from a hard-lived youth sank in and he realized he would have to have a conversation with his children a little earlier than most fathers.

“There was a time in my life where I’m not necessarily proud of the man I was,” Gilbert shares. “I want our children to have a song where they can hear my voice say ‘I love you’ and acknowledges that there’s going to come a time when they figure out I’m not a ‘super hero.’ I’m human; I’ve made mistakes. And I’ll make a lot more, but there’s a man who really did hang the moon, who’s got your back and always will, and if I’ve done my job as a father, they’ll know that truth.”

Gilbert wrote “Man That Hung The Moon” at their home in one sitting. “We had actually just found out that we were pregnant with our second, a baby girl due this September, the day I wrote this song. I sat down to write them a letter, but I’m a songwriter first so I ended up with this song.”
“You’re gonna think I hung the moon / That I made the sky / That the sun rises / And sets inside my eyes; And it won’t be long / ‘Til I hear daddy’s home / And footsteps runnin’ to the man that hung the moon”

“One day you’ll realize I’ve lost my cape, I can’t fly / And I’m only human / And you’ll need more than me / But you’ll know to hit your knees; If I’ve done my job right, you’ll know where to find the Man who really hung the moon.”

The new track follows "Not Like Us," released in April in partnership with NASCAR. This fall Gilbert sets sail for his Second Annual Kick It In The Ship cruise. He will be joined by Chase Rice, Tyler Farr, Colt Ford, Brian Davis, Sixforty1, Tyler Booth and more as they rock the high-seas from Miami to Cozumel Nov. 4-8, 2019. More details to be announced soon.

About Brantley Gilbert
One of only five Country artists to have back-to-back PLATINUM albums this century, Brantley Gilbert has made his own kind of Country music, a sound that has resonated with the outsiders, outliers and zest-for-life livers in a collective known as the BG Nation. The Georgia-born-and-bred singer/songwriter has six No. 1s – “Country Must Be Country Wide,” “You Don’t Know Her Like I Do,” the CMA Awards Song of the Year nominee “Dirt Road Anthem,” “My Kinda Party,” “Bottoms Up” and “One Hell Of An Amen” – and the 2014 American Music Award for Favorite Country Album for JUST AS I AM to his credit. Following his highly-acclaimed GOLD-certified album THE DEVIL DON’T SLEEP (The Valory Music Co.), Gilbert recently teamed up with Lindsay Ell on his new single “What Happens In A Small Town,” which is currently ascending at Country radio. But what separates Gilbert from the rest is his deep commitment to real people, vets, anyone who needs a little help. His hard-charging performances define country’s outlaw edge, what Entertainment Weekly hails for “his swaggering guitars, catchy hooks, and a DGAF attitude” and American Songwriter raves, “Gilbert never fails to deliver.”