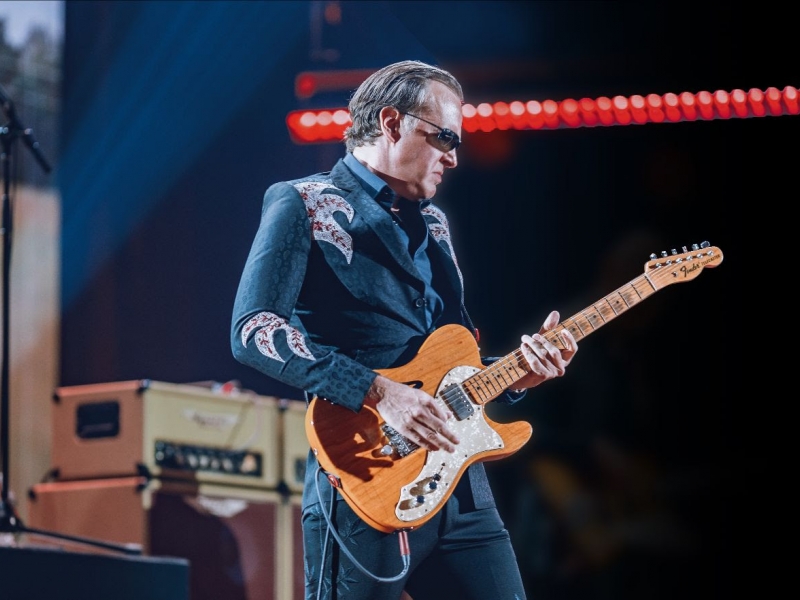 Tickets On Sale This Friday, July 29th at JBonamassa.com

NASHVILLE, Tenn. – Three-time GRAMMY nominee and 25x Billboard chart-topper Joe Bonamassa announces his Spring Tour 2023, kicking off February 15 in Charleston, West Virginia, performing in 16 cities in the U.S. before wrapping March 11 in St. Augustine, Florida. Tickets for the U.S. Spring Tour 2023 go on sale this Friday, July 29 at JBonamassa.com.
As part of the spring tour, Bonamassa’s Keeping The Blues Alive at Sea VIII is set for March 13-17, 2023, departing from Miami, Florida to Puerto Plata, Dominican Republic. The final festival line-up which already boasts the legendary Little Feat and Joanne Shaw Taylor will be announced in August. KTBA at Sea is one of the largest fundraisers for his non-profit Keeping The Blues Alive Foundation to aid in its mission to promote music education by providing grants and resources to schools and musicians in need.

The announcement of his spring tour comes as the blues-rock titan prepares to embark on his U.S. Summer Tour 2022, launching next week at Nashville’s Ryman Auditorium on Aug. 2, and features a two-night stop at the iconic Red Rocks Amphitheatre in Morrison, Colorado, which will be recorded for a concert film to be released at a later date. The tour will end with an unprecedented live event, KTBA Presents: Joe Bonamassa & Friends on August 19 at Northwell Health at Jones Beach in Long Island, New York, which will include special guests Kenny Wayne Shepherd Band and Jason Bonham’s Led Zeppelin Evening.

About Joe Bonamassa
Blues-rock superstar Joe Bonamassa is one of the most celebrated performing musicians today. A three-time GRAMMY-nominee, Bonamassa earned his 25th No. 1 on the Billboard Blues Album Chart, with his latest studio album Time Clocks.

Cited by Guitar World as “arguably the world’s biggest blues guitarist,” Bonamassa is known for taking risks and venturing into uncharted territory throughout his wide-ranging career, and his latest studio album Time Clocks marks his most raw, rocking album yet, with American Songwriter sharing, “Bonamassa pushes into fresh territory while staying within a blues-based framework,” and “there is more than enough proof in this sprawling set that Bonamassa doesn’t intend to rest on his laurels or take his star status in the blues-rock genre for granted.”

Bonamassa earned his third GRAMMY nomination with 2020’s Royal Tea, recorded at the legendary Abbey Road Studios and bringing Bonamassa full circle: reconnecting the guitar-slinging kid who stumbled across the best of British-blues in his dad’s vinyl collection to the player he is today. That same year, Bonamassa delivered a groundbreaking live performance from the legendary Ryman Auditorium in Nashville, where he played Royal Tea in its entirety to over tens of thousands of people across the globe via livestream, recording the full set for the live concert film and album Now Serving: Royal Tea Live From The Ryman, released in 2021.

Bonamassa also runs Keeping the Blues Alive Foundation, a non-profit that promotes music education and blues music by funding scholarships and providing music education resources to schools in need. To date, the foundation has provided schools and teachers with over $1 Million and has positively impacted 74,000 students in all 50 states.

Created by Bonamassa and Roy Weisman, Keeping The Blues Alive Records (KTBA Records) has released albums for many artists, including musical icon Dion’s Blues With Friends, Chicago Queen of Guitar Joanna Connor’s 4801 South Indiana Avenue and British Blues-Rock star Joanne Shaw Taylor’s Blues From The Hear Live, all of which debuted at No. 1 on the Billboard Blues Charts, while Blues-legend Larry McCray’s Blues Without You debuted at No. 2. Bonamassa plans to produce and release more artists on KTBA Records this year.

Typically, on the road about 200 days out of the year, Bonamassa will kick off his U.S. Summer Tour 2022 on Aug. 2 at Nashville’s Ryman Auditorium before wrapping with the biggest blues party on the beach, KTBA Presents: Joe Bonamassa & Friends on Aug. 19, featuring the Kenny Wayne Shepherd Band and Jason Bonham’s Led Zeppelin Evening at Jones Beach Theater. His U.S. Fall Tour 2022 is announced and on sale now.