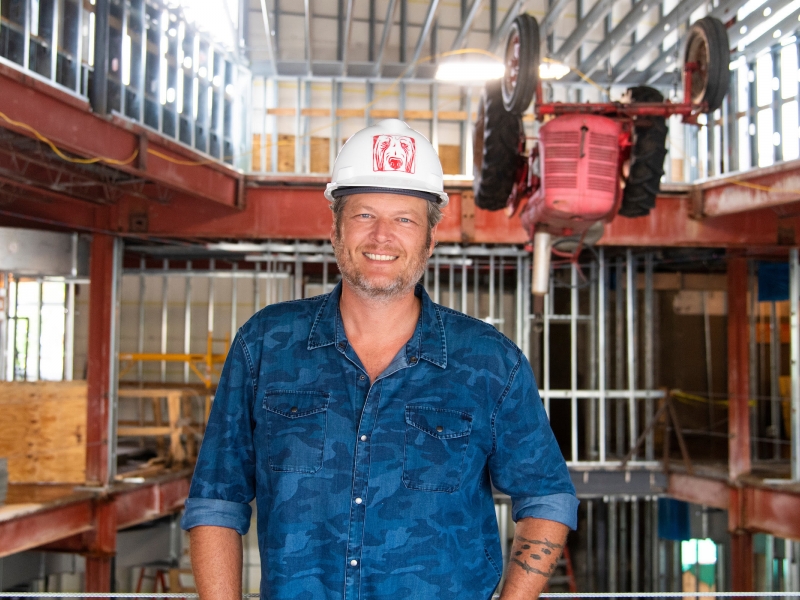 “It works perfectly with who I am as an artist, my persona and what I want people to take away at the end of the day... I love country music, I love entertainment and I love to a good time,” Shelton said of the Ole Red brand during the press conference.

When completed in spring 2019, Ole Red Gatlinburg will be a multi-level, 13,500 square-foot entertainment venue with a two-story bar and restaurant, retail area, performance space, dance floor and exterior terrace, seating 325 guests and open daily, year-round. The venue will be equipped with state of the art performance equipment including concert-level production and sound capabilities, along with LED screens throughout the space. Programming will include curated concert line-ups, showcases for up-and-coming local talent and will feature live music throughout the week. Shelton has also expressed the importance of providing his contestants from NBC’s “The Voice” with opportunities to perform at each of the Ole Red locations.

Gatlinburg is the third Ole Red location, following the first in Shelton’s adopted Oklahoma hometown of Tishomingo and a second in Nashville, Tennessee. On Sept. 13, Ryman Hospitality Properties announced plans for a fourth location coming to Orlando, Florida in 2020.

For more information on all Ole Red locations, stay tuned to olered.com.

About Ole Red
Ole Red is a lifestyle and entertainment brand inspired by Blake Shelton’s clever, irreverent third-chart hit, “Ol’ Red.” You can currently find Ole Red entertainment venues and products in two locations in the United States, the flagship multi-story bar, restaurant and entertainment venue in the heart of downtown Nashville’s famed Lower Broadway, the very first location in Blake’s hometown of Tishomingo, Oklahoma. The Company has announced additional locations in Gatlinburg, Tennessee (2019) and Orlando, Florida (2020). Ole Red is owned and operated by Ryman Hospitality Properties, Inc. as part of its Opry Entertainment division. For additional information about Ole Red, visit us online at olered.com.

About Blake Shelton
Country Music Association’s 2012 “Entertainer of the Year,” five-time Male Vocalist of the Year winner and GRAMMY nominee Blake Shelton continues to add to his superstar status. In November he released his album Texoma Shore, which became his sixth record to debut at No. 1 on the Billboard Top Country Albums chart and marked his 11th all-genre Top 10. With 25 #1 singles to his credit, Shelton’s Texoma Shore has yielded the hit songs “I’ll Name The Dogs,” “I Lived It” as well as his current single, “Turnin’ Me On.” In the week following album launch, Shelton became the first artist in Country Aircheck / Mediabase history to have six songs chart simultaneously. Texoma Shore follows 2016’s Gold-certified If I’m Honest, the best-selling country album release of the year, which spawned three chart-topping songs and earned him a No. 1 on both the Billboard Top Country Albums and the all-genre Top Album Sales charts.

A member of the Grand Ole Opry, Shelton has earned a host of honors throughout his career including 20 ACM nominations and the Top Country Artist title at the 2017 Billboard Music Awards. As a coach for the Emmy Award-winning television show "The Voice", Shelton is a six-time champion, most recently with his contestant Chloe Kohanski. Offstage, Shelton has teamed up with Ryman Hospitality to open a string of Ole Red entertainment restaurant venues, a nod to his 2001 hit of the same name. The first location in his Oklahoma hometown Tishomingo opened its doors in September 2017, with Nashville’s venue on lower Broadway open now, plus plans for locations in Gatlinburg, Tennessee and Orlando, Florida.