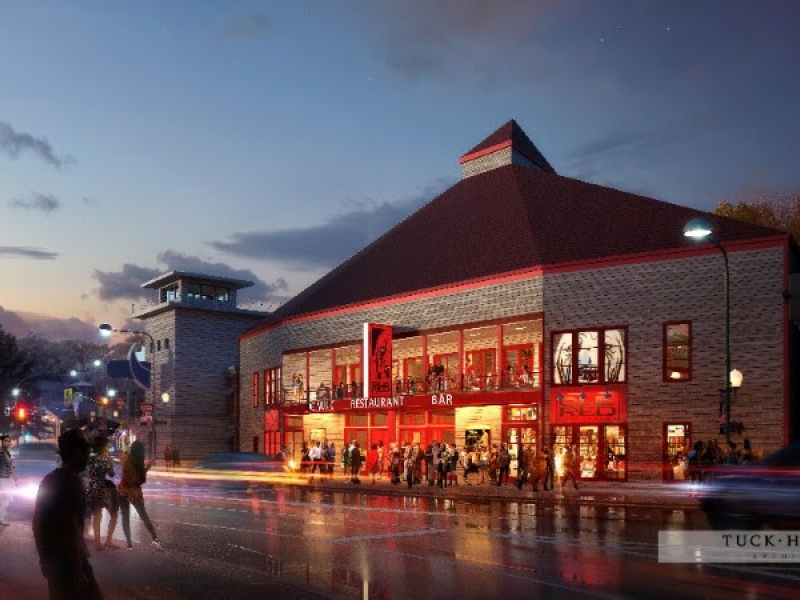 With a planned opening in spring 2019, Ole Red Gatlinburg will be a $9 million, multi-level 16,000-square-foot entertainment venue with a two-story bar and restaurant, retail area, performance space, dance floor and exterior terrace. Its chef-driven, Shelton-inspired menu will feature a few Nashville classics like Hot Chicken & Waffles as well as BBQ, burgers and additional Southern favorites.

Designed to embody the spirit of Shelton’s clever, irreverent hit “Ol’ Red,” the Ole Red brand is part of Ryman Hospitality Properties’ strategy to create digital content, retail products and entertainment venues that celebrate the country lifestyle and resonate with country music’s rapidly growing consumer base of more than 100 million people across the United States.

Ryman Hospitality Properties Chairman and CEO, Colin Reed, said, “With 12 million annual visitors and a rich country music legacy, Gatlinburg is an ideal destination for the Ole Red brand. We know the Smoky Mountain region is tremendously popular with country lifestyle consumers, and we believe Ole Red offers a unique entertainment experience that will attract even more visitors to the area.”

The venue will be equipped with state-of-the-art performance equipment including concert-level production and sound capabilities, along with LED screens throughout the space. Programming will include curated concert line-ups, showcases for up-and-coming talent and more to be announced as the venue nears completion.

Blake Shelton said, “Gatlinburg is one of my all-time favorite places. This part of the country is full of people who love good food, great music, family and most importantly, a good time. That’s what Ole Red is all about, and I can’t wait to give my fans another place to have fun in Gatlinburg.”

Reed continued, “It was our intention to make this announcement from Gatlinburg today. Unfortunately due to the inclement winter weather, we had to change our plans. I would like to sincerely thank everyone in Gatlinburg who was involved in making this great venture possible. We are thrilled to be a part of the city’s growth, and we look forward to coming back to Gatlinburg very soon.”

Ole Red Gatlinburg will be located at 511 Parkway, the main drive into town from Pigeon Forge. Ryman Hospitality Properties holds a long-term lease on the building and is working with Tuck-Hinton Architects and Anderson Design Studio on the project.


About Ryman Hospitality Properties, Inc.
Ryman Hospitality Properties, Inc. (NYSE:RHP) is a REIT for federal income tax purposes, specializing in group-oriented, destination hotel assets in urban and resort markets. The Company’s owned assets include a network of four upscale, meetings-focused resorts totaling 7,811 rooms that are managed by lodging operator Marriott International, Inc. under the Gaylord Hotels brand. Other owned assets managed by Marriott International, Inc. include Gaylord Springs Golf Links, the Wildhorse Saloon, the General Jackson Showboat, The Inn at Opryland, a 303-room overflow hotel adjacent to Gaylord Opryland, AC Hotel Washington, DC at National Harbor, a 192-room overflow hotel near Gaylord National and the Gaylord Rockies Resort and Convention Center, which is a joint venture investment scheduled to open in the fourth quarter 2018. The Company also owns and operates media and entertainment assets, including the Grand Ole Opry, the legendary weekly showcase of country music’s finest performers for over 90 years; the Ryman Auditorium, the storied former home of the Grand Ole Opry located in downtown Nashville; 650 AM WSM, the Opry’s radio home; and Ole Red, a country lifestyle and entertainment brand. The Company also is a joint venture owner in Opry City Stage, the Opry’s first home away from home, in Times Square. For additional information about Ryman Hospitality Properties, visit www.rymanhp.com.

About Blake Shelton
Country Music Association’s 2012 “Entertainer of the Year,” five-time Male Vocalist of the Year winner and GRAMMY nominee Blake Shelton continues to add to his superstar status.
His most recent album, If I’m Honest, debuted at #1 on the Billboard Top Album Sales Chart and the Billboard Country Album Chart, and is the best-selling country album release of 2016. If I’m Honest has already yielded the #1 smash single, “Came Here To Forget,” which became his 22nd #1 single. His new single, “A Guy With A Girl” is Top 10 and climbing, and he recently performed the song on The Voice and Jimmy Kimmel Live. The album features three songs written by Shelton which include the gospel tinged “Savior’s Shadow,” “Friends,” which is also featured in the #1 film, The Angry Birds Movie, and “Go Ahead and Break My Heart,” a song he wrote and performs with Gwen Stefani.

A member of the Grand Ole Opry, he has earned a host of awards throughout his career, which most recently include Favorite Country Male Artist at the American Music Awards, the first-ever “Male Artist of the Year” and “Story of the Year” for the RARE COUNTRY Awards, and has three nominations at the upcoming People’s Choice Awards.  As a coach for the Emmy Award Winning television show, The Voice, Shelton is the reigning and five-time champion, most recently with his contestant Sundance Head.  He kicked off his 2018 “Doing It To Country Songs” Tour in February.