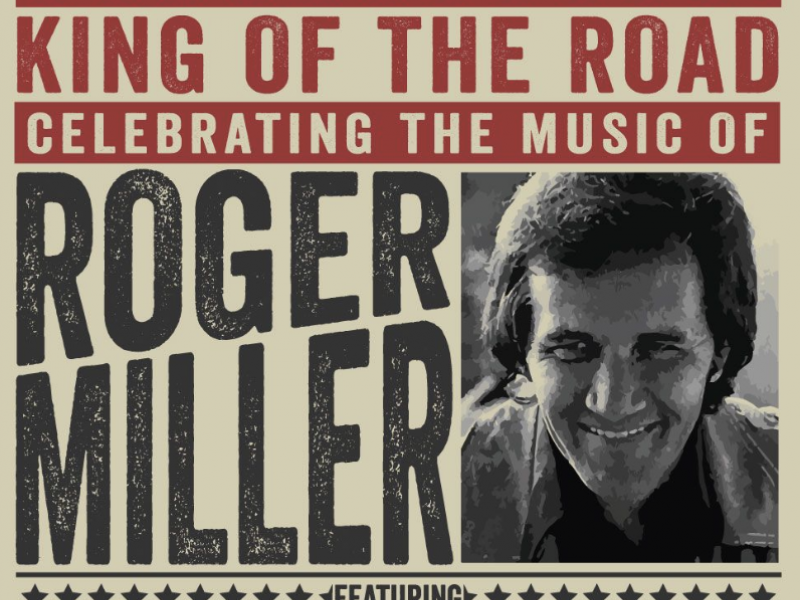 Blackbird Presents is excited to announce a star-studded concert event at the historic Opry House. “King Of The Road: Celebrating The Music of Roger Miller” celebrates the songs of one of country music’s most beloved singer-songwriters widely known for his honky-tonk-influenced chart-topping hits.

Tickets go on sale Friday, Jan. 24, at 10:00 a.m. CT at ticketmaster.com and the Opry House Box Office.  Special VIP packages, including premium seats and exclusive concert merchandise, will be available to purchase. Blackbird Presents also continues its tradition of supporting important charities, donating a portion of the proceeds to Thistle Farms (thistlefarms.org), a nonprofit social enterprise, based in Nashville, TN, dedicated to helping women survivors recover and heal from trafficking, prostitution, and addiction.

Country Music Hall of Fame member Roger Miller is widely regarded as one of the most multifaceted talents that country music has ever seen. Roger left an astonishing legacy of musical depth and range with hits like “King of the Road,” “Engine Engine #9,” “Kansas City Star,” “Dang Me,” “England Swings,” and “Do-Wacka-Do.” With eleven GRAMMY® Awards across multiple genres and a Tony® Award for best score of the 1985 Broadway musical Big River, this singer-songwriter, actor, composer, and honky-tonk man’s legacy will live on forever.

“I’m thrilled to see all these great artists coming out to celebrate my ol’ pal Roger Miller. He was certainly one of a kind, his songs will live forever.” say’s country music legend Willie Nelson.

“My father is one of the greatest creative geniuses the world has known. I want everyone to know that and a tribute of this magnitude is a great way to remind people just how incredible he was.” say Dean Miller.

Recent concerts, broadcast specials and releases include “Willie Nelson: Life & Songs Of An American Outlaw,” “All In For The Gambler: Kenny Rogers’ Farewell Concert Celebration,” “Sing Me Back Home: The Music of Merle Haggard,” “The Life & Songs of Kris Kristofferson,” “Imagine: John Lennon 75th Birthday Concert,” “Outlaw: Celebrating The Music of Waylon Jennings,” “The Life and Songs of Emmylou Harris,” and “All My Friends: Celebrating The Songs and Voice of Gregg Allman,” the last of which earned a 2014 GRAMMY® Award nomination for Gregg Allman and Taj Mahal's awe-inspiring performance of “Statesboro Blues.”
Blackbird Presents is also the creator and producer of The Outlaw Music Festival Tour, in partnership with Willie Nelson; The American Roots Music & Arts Festival, in partnership with Eric Church; and The Last Waltz Tour. Visit us at www.blackbirdpresents.com