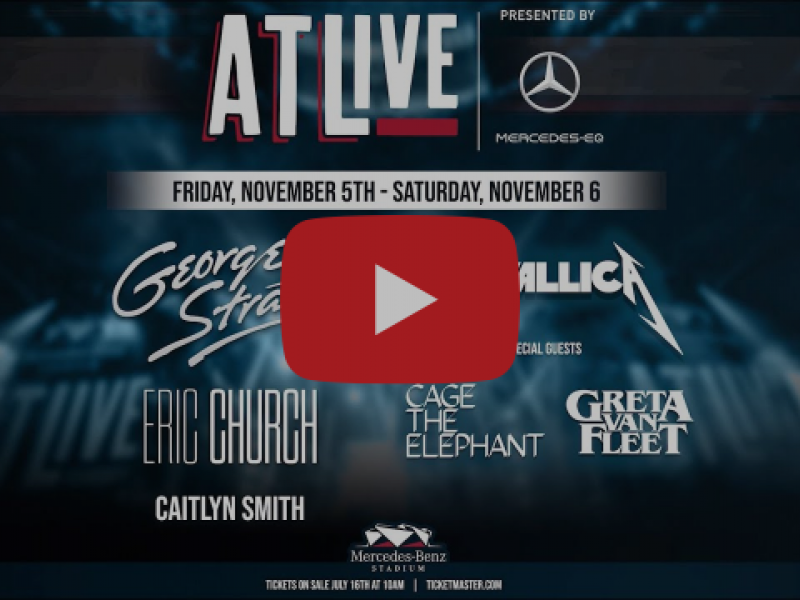 ATLive is Presented by Mercedes-EQ

ATLANTA, Ga. – AMB Sports and Entertainment (AMBSE) is once again bringing the hottest artists under one roof for one of the most exciting multi-day music events in the Southeast, ATLive Presented by Mercedes-EQ returns Friday, November 5 and Saturday, November 6, to Mercedes-Benz Stadium.

ATLive, a multi-genre concert series developed and promoted by AMB Sports and Entertainment, is the premier destination concert series for the city of Atlanta. The event also provides the opportunity to give back through purpose-driven philanthropic initiatives, aligning with the organization’s core values. This year, AMBSE is partnering with George Strait and his longstanding partners at the Military Warriors Support Foundation as well as Metallica’s All Within My Hands nonprofit to donate a portion of the proceeds from ATLive to providing housing for wounded veterans and feeding the hungry.

Tickets for each night will go on-sale Friday, July 16 at 10 a.m. ET via Ticketmaster.

To learn more about the two-night event, visit mercedesbenzstadium.com/concert-series. Follow along online at #ATLive.

“We are thrilled to be bringing ATLive back with an incredible lineup of artists,” said Tim Zulawski, Senior Vice President and Chief Revenue Officer, AMB Sports and Entertainment. “From the beginning, our goal was to create a concert series that will become the must-see event for Atlanta. In our first year, we delivered a world-class experience for fans from across the world and we are excited to create that same experience again while giving back to our communities and those in need.”

In its inaugural year, ATLive, the first self-promoted concert series for AMBSE, sold out both nights bringing more than 90,000 fans together at Mercedes-Benz Stadium to enjoy incredible music by today’s hottest Country artists. ATLive, presented by Mercedes-EQ and in partnership with Orangetheory Fitness, will be produced by AMBSE with Messina Group overseeing production of shows.

ATLive will add to the already impressive lineup of performers set to play at Mercedes-Benz Stadium in the coming months including Kenny Chesney and Elton John in 2022.

About All Within My Hands
All Within My Hands was founded by the band in 2017 as a way for the entire Metallica family to give back to communities that have supported them by funding workforce education, the fight against hunger, and other critical local services. All Within My Hands expenses are covered entirely by the band, the board, and friends who have worked with the them over many years, ensuring that 100% of proceeds go directly to help those in need. To date, All Within My Hands has provided $4.1 million in grants to career and technical education programs, over $1.4 million dollars to combat food insecurity, and $3.2 million towards disaster relief efforts. For more information, visit allwithinmyhands.org.

About Military Warriors Support Foundation
Military Warriors Support Foundation is a 501(c)(3) non-profit charity, founded by LTG Leroy Sisco (Ret), in 2007. Their mission is to provide programs that facilitate a smooth and successful transition for our nation’s combat-wounded heroes and Gold Star families. Their programs focus on housing and homeownership, recreational activities, transportation assistance and leadership development. Through select programs, they have awarded nearly 900 mortgage-free homes and over 100 payment-free vehicles to combat-wounded heroes, Gold Star spouses, and their families in all 50 states. In addition to the home or vehicle, the families receive family and financial mentoring. For more information, visit MilitaryWarriors.org.