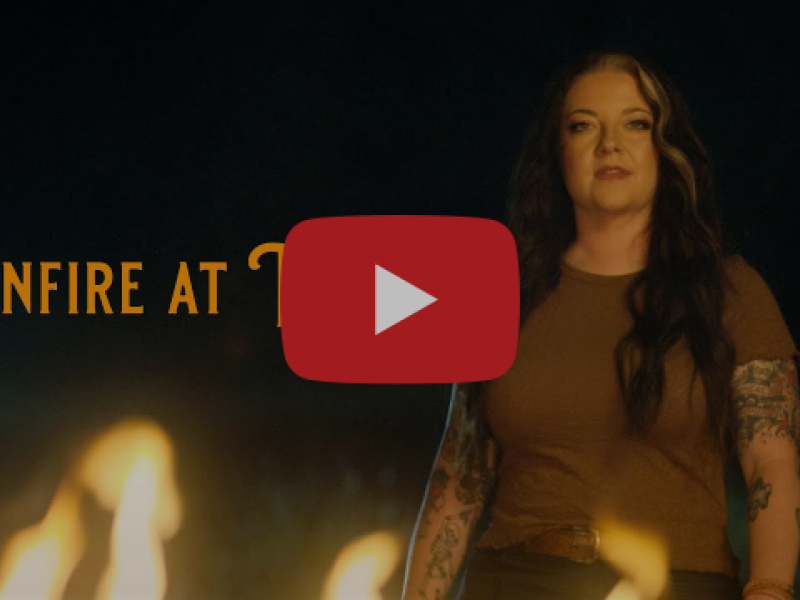 NASHVILLE, Tenn. – Ashley McBryde and her collaborators officially welcome you to Lindeville. With its honest, specific and morally complicated portrayal of the many characters that can personify small town life, Lindeville will feel like a place that many have visited before. Praised by The New York Times as “a fluorescent carnival of pedal steel and thumping guitar that proves McBryde can be a skilled curator, as well as a performer,” Ashley McBryde Presents: Lindeville is available now via Warner Music Nashville.

Produced by John Osborne, Ashley McBryde Presents: Lindeville includes performances from McBryde, Brothers Osborne, Brandy Clark, Aaron Raitiere, Pillbox Patti, Caylee Hammack and Benjy Davis, delivering a distilled version of everything that listeners have come to appreciate from the Arkansas native: raw, honest, specific portraits of small-town America, and the many characters that you may encounter in any one of them.

Written during a weeklong exercise in a rural cabin outside Nashville, McBryde set out with a group of her favorite collaborators to work up a project they had no intention of ever recording or releasing. Those individuals included McBryde, Raitiere, Hayford, Clark, Davis and Connie Harrington, each drawing from their own upbringings to give Lindeville an every-town realism blended with familiar characters, moral ambiguity and a healthy enough dose of gallows humor to make this town feel like your town.

With swelling strings prefacing what Arkansas Democrat-Gazette calls “a ribald tale of neighbors,” opening track “Brenda Put Your Bra On” threads the needle, acquainting listeners with its first cast of characters.

“I’d like to think that when you first get to town, you think to yourself, ‘What a cute little neighborhood,’” outlines McBryde. “And then the next thing you see is dishes flying across Main Street. And you’re like, ‘Okay! Good morning, Lindeville!’And that’s when we find out that Tina’s friends are witnessing her catching Marvin cheating.

“So ‘Bonfire at Tina’s’ is about all of those women in that town going, ‘Look, we all hate each other, and we can go back to talking shit about each other, but right now, one of us is hurting, and that gives us permission to drink too much, smoke and set shit on fire,” McBryde imparts.

“I secretly hope that multiple people get together to burn the things that have been holding them back (in a super safe way),” admits McBryde. “But I hope that it becomes an anthem and an outlet, not just for women, but for anybody who’s like, ‘You know what? I’m so tired of struggling with my weight.’ And they go burn their scale. Yes. Do that!”

“An album like Lindeville,” notes Stereogum, “is a writing exercise, and you can look at a work like that from an academic lens if you want. But when those writing exercises really work, they can move you…A lot of people put a lot of work into this record, and they made something that resonates on a deep, emotional level. Give it up for them.”

“This might turn out to be one of the most unique, interesting, and important albums released by a major country music label in years,” sums up  Saving Country Music.

About Ashley McBryde
CMA and ACM award winner Ashley McBryde cut her teeth playing country songs in rural biker bars – and it shows. Her 2018 major label debut Girl Going Nowhere (Warner Music Nashville) charmed the New York Times, NPR, Rolling Stone, Paste, The Washington Post and more, all en route to landing a GRAMMY nomination for Best Country Album. McBryde closed out 2019 with ACM New Female Artist, CMT Breakout Artist of the Year, a New Artist of the Year win at the 53rd Annual CMA Awards and two nominations for the 2020 GRAMMYs for Best Country Song and Best Country Solo Performance for “Girl Goin’ Nowhere.” Her follow-up Never Will was tagged by Rolling Stone as one of the most anticipated of the year alongside NPR, who also ranked her Top 10 RIAA Platinum-Certified single “One Night Standards” as one of the best songs of 2019. Produced once again by Jay Joyce, Never Will reveals the witty, confessional, detail-driven songwriting addressing a wide spectrum of blue-collar Southern women’s experience introduced on Girl Going Nowhere is still here, but perhaps even sharper. The album earned McBryde a 2021 GRAMMY nomination for Best Country Album, making Never Will the only album nominated for Country Album of the Year by the ACMs, CMAs and the Recording Academy in the same award season. Her critically acclaimed duet with Carly Pearce, “Never Wanted To Be That Girl,” went all the way to No. 1 and earned McBryde and Pearce the ACM award for Musical Event of the Year. McBryde earned five total 2022 CMA nominations including her third consecutive nod for Female Vocalist of the Year along with Single of the Year, Song of the Year, Musical Event of the Year and Music Video of the Year for her duet with Pearce. The Arkansas-native invites listeners to Ashley McBryde Presents: Lindeville, a collaborative new project featuring Brothers Osborne, Brandy Clark, Pillbox Patti, Caylee Hammack, Aaron Raitiere and more. Praised by The New York Times as “a fluorescent carnival of pedal steel and thumping guitar that proves McBryde can be a skilled curator, as well as a performer,” Ashley McBryde Presents: Lindeville is available now. For more information, visit AshleyMcBryde.com or follow her at Facebook.com/AshleyMcBryde, Instagram and Twitter @AshleyMcBryde and TikTok @AshleyMcBrydeMusic.