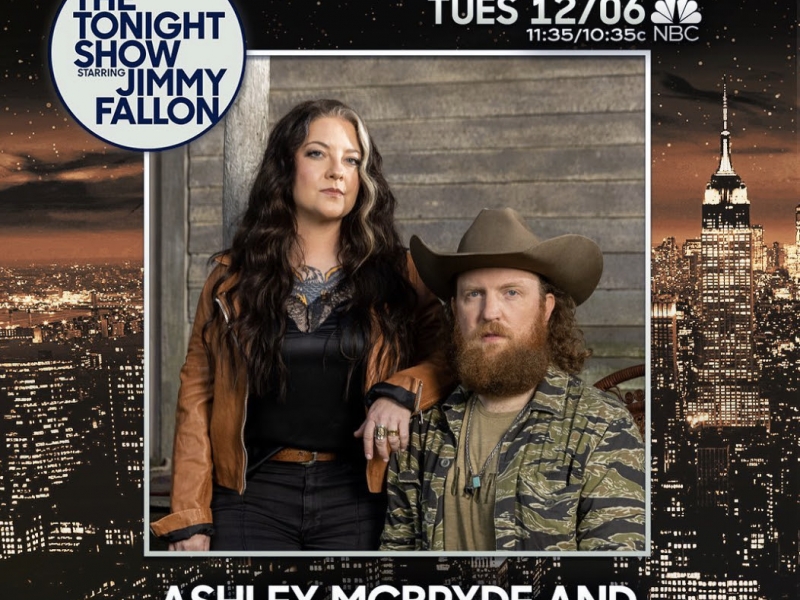 Lauded by Tennessean as “one of this year’s best country-folk songs, period,” “Gospel Night At The Strip Club” has struck a chord with fans and critics alike, with Stereogum calling it “a total showstopper,” while Billboard praises the track “serves as one of the project’s most gripping, soul-searching pulses.”

“One of Lindeville’s highlights,” shares Los Angeles Times, “a sparse acoustic number that alternates detailed verses about a club’s various habitués with a moving chorus.” That chorus “is crucial,” asserts PASTE, “because it makes explicit the project’s unifying theme: Everyone is flawed, and everyone is worthy of love and respect despite those flaws. Perhaps we should spend less time hiding our sins and weaknesses, and more time forgiving the same in others.”

Marking her third consecutive GRAMMY nomination for Best Country Album, following Warner Music Nashville’s Girl Going Nowhere in 2018 and Never Will in 2020, Ashley McBryde Presents: Lindeville was produced by Osborne and features performances from Brothers Osborne, Brandy Clark, Aaron Raitiere, Pillbox Patti, Caylee Hammack and Benjy Davis. Landing on Rolling Stone’s “The 100 Best Albums of 2022,” the project brings them all together “to spin stories of small-town life both heartbreaking and hilarious.”

Both McBryde and Osborne are also up for Best Country Duo/Group Performance, with McBryde’s No. 1 duet with Carly Peace “Never Wanted To Be That Girl” and Brothers Osborne’s “Midnight Rider’s Prayer.”

This Saturday, Dec. 10, McBryde will fulfill a lifelong dream as she’s inducted as a Grand Ole Opry Member, and in 2023, the Arkansas native invites you to the revered Ryman Auditorium to experience Ashley McBryde Presents: Lindeville Live, featuring the cast of collaborators and special guests performing songs from her critically acclaimed album, February 15 and 16. Tickets are available at AshleyMcBryde.com.

About Ashley McBryde
CMA and ACM award winner Ashley McBryde cut her teeth playing country songs in rural biker bars – and it shows. Her 2018 major label debut Girl Going Nowhere (Warner Music Nashville) charmed the New York Times, NPR, Rolling Stone, Paste, The Washington Post and more, all en route to landing a GRAMMY nomination for Best Country Album. McBryde closed out 2019 with ACM New Female Artist, CMT Breakout Artist of the Year, a New Artist of the Year win at the 53rd Annual CMA Awards and two nominations for the 2020 GRAMMYs for Best Country Song and Best Country Solo Performance for “Girl Goin’ Nowhere.” Her follow-up Never Will was tagged by Rolling Stone as one of the most anticipated of the year alongside NPR, who also ranked her Top 10 RIAA Platinum-Certified single “One Night Standards” as one of the best songs of 2019. Produced once again by Jay Joyce, Never Will reveals the witty, confessional, detail-driven songwriting addressing a wide spectrum of blue-collar Southern women’s experience introduced on Girl Going Nowhere is still here, but perhaps even sharper. The album earned McBryde a 2021 GRAMMY nomination for Best Country Album, making Never Will the only album nominated for Country Album of the Year by the ACMs, CMAs and the Recording Academy in the same award season. Her critically acclaimed duet with Carly Pearce, “Never Wanted To Be That Girl,” went all the way to No. 1 and earned McBryde and Pearce the ACM award for Musical Event of the Year. McBryde earned five total 2022 CMA nominations including her third consecutive nod for Female Vocalist of the Year along with Single of the Year, Song of the Year, Musical Event of the Year and Music Video of the Year for her duet with Pearce. The Arkansas-native invites listeners to Ashley McBryde Presents: Lindeville, a collaborative new project featuring Brothers Osborne, Brandy Clark, Pillbox Patti, Caylee Hammack, Aaron Raitiere and more, earning McBryde her third consecutive nod for Best Country Album, while her duet with Pearce received a nod for Best Country Duo/Group Performance. Upon its release on September 30, Ashley McBryde Presents: Lindeville garnered applause from The New York Times, NPR, Variety, Vulture, Esquire, Rolling Stone, Billboard and Stereogum, among many more. Tickets for the two-night special event Ashley McBryde Presents: Lindeville Live at Ryman Auditorium on February 15-16 are available now. For more information, visit AshleyMcBryde.com or follow her on Facebook, Instagram and Twitter @AshleyMcBryde and TikTok @AshleyMcBrydeMusic.