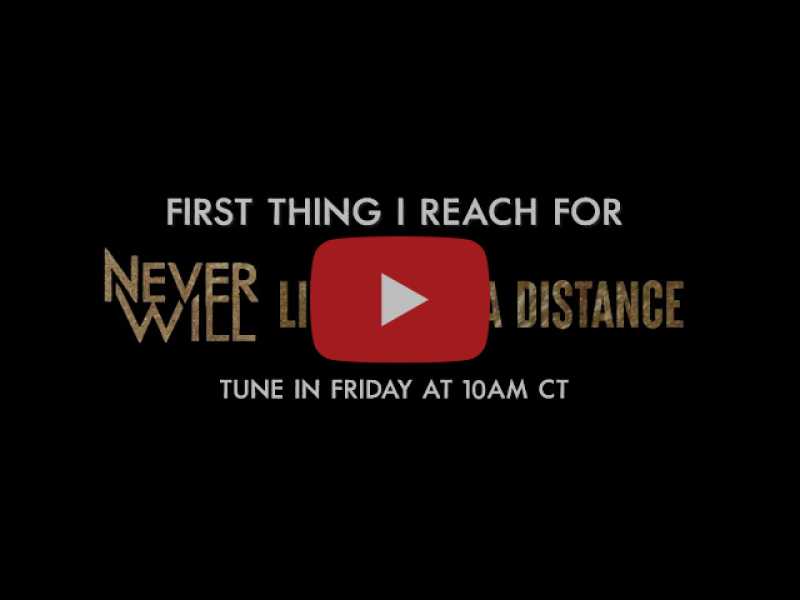 NASHVILLE, Tenn. – With touring still on hold, ACM and CMA Award winner Ashley McBryde gives fans a taste of what her GRAMMY-nominated album sounds like live with her upcoming six-song EP Never Will: Live From A Distance available to pre-save now and arriving Friday, May 28. EP opener “First Thing I Reach For – Live,” which Rolling Stone boasts, “conjures the Telecaster wisdom of Merle Haggard,” is available everywhere now. Fans can join McBryde’s fan club, The Trybe, to be the first to hear the new songs and get exclusive opportunities.

“We released Never Will on April 3 last year, so we went straight from rehearsals for a tour to not seeing each other in person for months,” reflects McBryde. “Getting together to rehearse and record these live versions safely was our way of giving the fans a taste of what they would have seen had the world not changed so much. Man did it feel good to strap on the guitar and see my guys and just play, but we cannot wait to do it again with our incredible fans in person soon.”

The four-time GRAMMY nominee continues to garner critical acclaim for Never Will, earning the title of Best Album from January’s Nashville Scene’s 21st Annual Country Music Critics’ Poll, voted by a consortium of leading national music critics, along with achievements in four additional categories: Best Single for “One Night Standards” at No. 3 and “Martha Divine” at No. 26; Best Female Vocalist at No. 2; Best Songwriter at No. 6; and Artist of the Year at No. 4.

“In an election year that misread the flyover, where people are both lonely and broke, it’s a gift to have someone who writes so well about money and desire as well as Ashley McBryde does,” Steacy Easton shared with Nashville Scene, while Jim Macnie remarks, “From throwing Grandma’s ashes off the roof to responding to treachery with a murderous glee, McBryde has upped her artistic confidence, and the music soars in kind.”

“McBryde honed her skill in the rock ’n’ roll bars of Memphis and is as much a rocker as Stapleton and Isbell. But she’s also a master of such traditional country music tropes as the pun song (“The First Thing I Reach For” and No. 3 Best Single “One Night Standards”) and the barroom sing-along catch phrase (“Never Will” and “Shut Up Sheila”),” praised Geoffrey Himes of Nashville Scene.

McBryde kicked off 2021 with multiple television appearances, including a debut performance on “The Ellen DeGeneres Show” with current single “Martha Divine,” applauded by Stereogum as “an arena-sized take on the song” and declaring McBryde as a “country singer whose grimy, gritty, desperate, literary songs fly in the face of Nashville-industry orthodoxy,” followed by a special performance of title track “Never Will” on ABC’s “Jimmy Kimmel Live!” on January 20. Watch McBryde and her band perform “Martha Divine” HERE and “Never Will” HERE.

“Martha Divine” follows “One Night Standards,” which emerged as McBryde’s first Top 10 hit while going RIAA-Certified Gold in both the United States and Canada, landing on NPR’s “25 Best Songs of 2019” and Rolling Stone’s “25 Best Country and Americana Songs of 2019,” along with The New York Times’ “Best Songs of 2020,” the only country song in the top 15.

About Ashley McBryde
Ashley McBryde cut her teeth playing country songs in rural biker bars – and it shows. Her 2018 major label debut Girl Going Nowhere (Warner Music Nashville) charmed the New York Times, NPR, Rolling Stone, Paste, The Washington Post, and more, all en route to landing a GRAMMY nomination for Best Country Album. McBryde closed out 2019 with ACM New Female Artist, CMT Breakout Artist of the Year, a New Artist of the Year win at the 53rd Annual CMA Awards and two nominations for the 2020 GRAMMYs for Best Country Song and Best Country Solo Performance for “Girl Goin’ Nowhere.” Her follow-up Never Will, released April 3, was tagged by Rolling Stone as one of the most anticipated of the year alongside NPR, who also ranked her lead Top 10 RIAA Gold-Certified single “One Night Standards” as one of the best songs of 2019. Produced once again by Jay Joyce, Never Will reveals the witty, confessional, detail-driven songwriting addressing a wide spectrum of blue-collar Southern women’s experience introduced on Girl Going Nowhere is still here, but perhaps even sharper, earning McBryde a 2021 GRAMMY nomination for Best Country Album, along with a 2020 CMA nomination for Album of the Year. NPR calls her music is “stadium-rock style” with a bluegrass wink or two and country music’s storytelling heart––and McBryde, no longer new, is the music’s ordained and highly capable standard bearer. At the 2020 ACM Awards, McBryde gained a winning nod for Musical Event of the Year as a guest on Miranda Lambert’s “Fooled Around and Fell In Love.” In addition to her CMA Album of the Year nomination, McBryde was up for CMA Female Vocalist of the Year and Music Event of the Year on Miranda Lambert’s “Fooled Around and Fell In Love.” For more information, visit AshleyMcBryde.com or follow her at Facebook.com/AshleyMcBryde, Instagram @AshleyMcBryde and Twitter at @AshleyMcBryde.