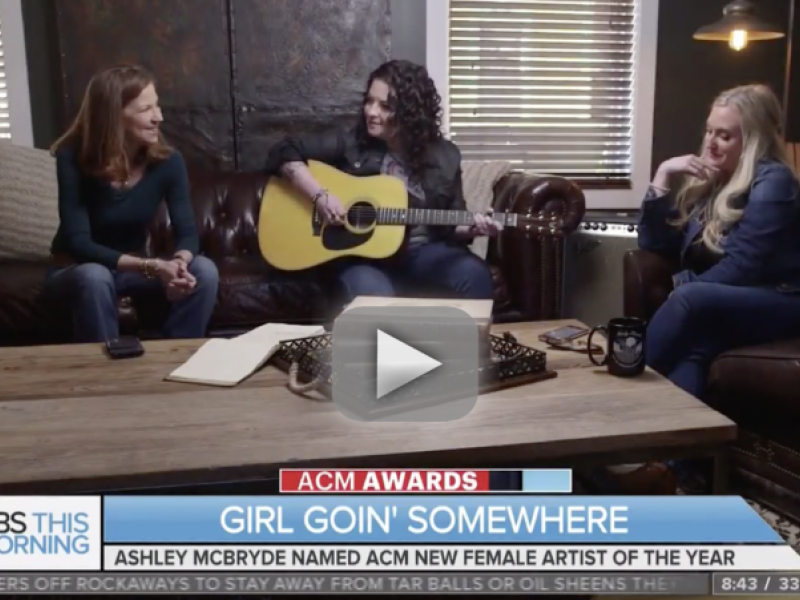 Still celebrating her big win for ACM New Female Artist of the Year, Ashley McBryde appeared in a special and emotional segment on CBS This Morning today (April 1) to also mark her 2019 Daytime Emmy Awards nomination for her performances of “Girl Goin’ Nowhere” and “American Scandal”on CBS This Morning Saturday.

On Wednesday (March 20), McBryde got word that she was nominated for Outstanding Musical Performance in a Daytime Program for the songs, which both appear on her GRAMMY-nominated debut album, Girl Going Nowhere. “What is life right now?!” the Arkansas native exclaimed on her socials. The 46th annual Daytime Emmy Awards take place Sunday, May 5, in Los Angeles, California.

However, Monday morning’s CBS This Morning interview revealed an emotional McBryde noting, “If anybody has told you to not passionately pursue what sets your soul on fire, they are wrong. Don’t you dare give up, and if you do  you better not let me find out about it.” For the profile, McBryde was joined by Nicolette Hayford, co-writer of "A Little Dive Bar in Dahlonega" and "Livin' Next to Leroy," as CBS correspondent Jan Crawford was treated to a rare insider's look at the songwriting process. McBryde, ACM’s New Female Artist of the Year, is the only new female nominee appearing in the Female Vocalist of the Year category alongside fellow country music powerhouses Miranda Lambert, Maren Morris, Kacey Musgraves and Carrie Underwood. The 54th ACM Awards ceremony will air live Sunday, April 7 on CBS from Las Vegas' MGM Grand Garden Arena.

Following performances in the U.K. and Australia last month, McBryde will now prep for a summer filled with stops at some of summer’s most popular festivals, including Windy City Smokeout, Country Thunder and the CMA Music Festival in Nashville. McBryde is also set for a triumphant return to the Grand Ole Opry on April 20.

About Ashley McBryde
Lauded by The New York Times as “an alluringly flexible singer, fluent in classic country, blues and Southern rock, with a voice that moves easily from tender to tough,” Ashley McBryde caught the attention of some of Nashville’s most raucous entertainers, landing her dates opening for Eric Church, Chris Stapleton, Miranda Lambert, Luke Combs and most recently Little Big Town and George Strait. The Washington Post raves, "McBryde's blue-collar storytelling and straightforward singing set her apart," including a set during her debut on the Grand Ole Opry stage, notably sharing "Girl Goin' Nowhere," the seminal title track from her March 30, 2018 Jay Joyce-produced LP for Atlantic Records/Warner Nashville. The GRAMMY, ACM and Emmy-nominated powerhouse has received praise for Girl Going Nowhere, earning the Arkansas native critical acclaim from The New York Times, The Washington Post, Rolling Stone, Variety and more. For tour dates and more information, visit AshleyMcBryde.com or follow her on Facebook at www.facebook.com/AshleyMcBryde, Instagram @ashleymcbryde and Twitter at @AshleyMcBryde.