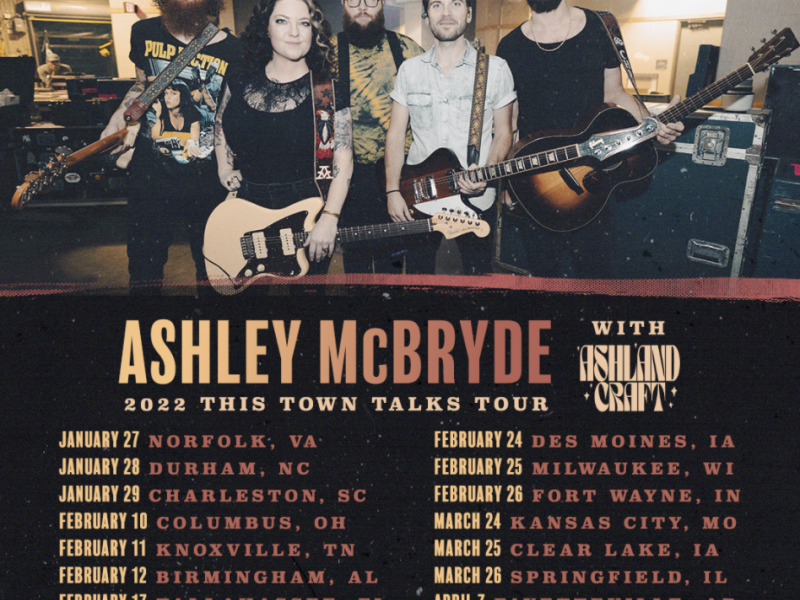 NASHVILLE, Tenn. – With multiple sold-out shows during the 2021 run of her This Town Talks Tour, including a milestone three-night headlining debut residency at Ryman Auditorium, Ashley McBryde announces 18 additional dates across the U.S. for 2022, with Ashland Craft as support. Tickets will go on sale this Friday, Oct. 29 at 10am local time, following the Trybe pre-sale beginning tomorrow, Oct. 26 at 10am local time. Tickets can be purchased at AshleyMcBryde.com.

The Arkansas-native continues soaring to new heights with three 2021 nominations from the Country Music Association (CMA): Female Vocalist of the Year, Single of the Year and Song of the Year for her critically acclaimed, RIAA Platinum-certified track “One Night Standards,” from her Warner Music Nashville follow-up Never Will.

Already garnering critical acclaim while climbing the charts at Country Radio, McBryde will join forces with Carly Pearce to perform their duet “Never Wanted To Be That Girl” at the CMA Awards on Nov. 10.

“Never Wanted To Be That Girl” has been dubbed by Rolling Stone as a “spiritual descendant of Reba McEntire and Linda Davis’ classic ‘Does He Love You’” that “ditches the campy melodrama for a bracing jolt of regret and clarity,” while MusicRow sums it up with a similar sentiment: “In a word, sensational…For the love of country music, play this.”

About Ashley McBryde
Ashley McBryde cut her teeth playing country songs in rural biker bars – and it shows. Her 2018 major label debut Girl Going Nowhere (Warner Music Nashville) charmed the New York Times, NPR, Rolling Stone, Paste, The Washington Post, and more, all en route to landing a GRAMMY nomination for Best Country Album. McBryde closed out 2019 with ACM New Female Artist, CMT Breakout Artist of the Year, a New Artist of the Year win at the 53rd Annual CMA Awards and two nominations for the 2020 GRAMMYs for Best Country Song and Best Country Solo Performance for “Girl Goin’ Nowhere.” Her follow-up Never Will, released April 3, was tagged by Rolling Stone as one of the most anticipated of the year alongside NPR, who also ranked her Top 10 RIAA Platinum-Certified single “One Night Standards” as one of the best songs of 2019. Produced once again by Jay Joyce, Never Will reveals the witty, confessional, detail-driven songwriting addressing a wide spectrum of blue-collar Southern women’s experience introduced on Girl Going Nowhere is still here, but perhaps even sharper, earning McBryde a 2021 GRAMMY nomination for Best Country Album, making Never Will the only album nominated for Country Album of the Year by the ACMs, CMAs and the Recording Academy in the same award season. The music itself is stadium-ready rock-and-roll with a bluegrass wink or two and country music’s storytelling heart––and McBryde, no longer new, is the music’s ordained and highly capable standard bearer. Recognized by the Country Music Association, McBryde is up for three 2021 awards: Female Vocalist of the Year + Single and Song of the Year for “One Night Standards.” McBryde’s This Town Talks Tour is currently underway with over 35 stops before wrapping on Jan. 15, 2022. For more information, visit AshleyMcBryde.com or follow her at Facebook.com/AshleyMcBryde, Instagram @AshleyMcBryde and Twitter at @AshleyMcBryde.

About Ashland Craft
Big Loud Records’ Ashland Craft is introducing her own brand of Country music with debut album, TRAVELIN’ KIND, out now. “With equal parts sass and strength, she’s poised to be a major voice in 2021,” deems Nashville Lifestyles. Among CMT’s Next Women of Country Class of 2021 and Pandora’s Country Artists to Watch 2021, American Songwriter hails, “There’s a New Country Badass in Town, and Her Name is Ashland Craft,” while adding, “This girl has star quality flying out of her boots.” Featured in knockout duet, “SO CLOSE,” off HARDY’s acclaimed album, A ROCK, CMT’s “‘can’t miss’ country star on the rise” has opened tours for major artists like Luke Combs, Morgan Wallen, and is currently supporting Zac Brown Band’s THE COMEBACK TOUR 2021. Discovering her honky-tonk spirit during cutting her teeth at a hometown bar in South Carolina singing Country and Rock covers plus cracking Top 10 on NBC’s The Voice, Craft buzzes under the influence of musical heroes Def Leppard, Chris Stapleton, Bonnie Raitt, The Chicks, and Sheryl Crow.