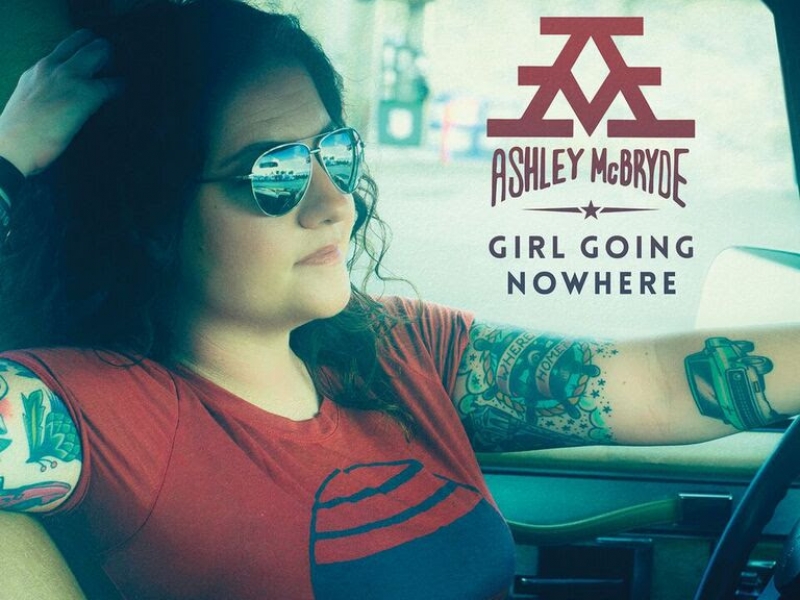 NASHVILLE, Tenn. –When Ashley McBryde and her touring band settled into producer Jay Joyce’s studio a few hours before dawn to record what would later become her first major label debut, Girl Going Nowhere, McBryde felt uninhibited. It wasn’t the whiskey or the weathered J45 that helped the Arkansas native finally feel at ease; it was the permission she gave herself to make the record she had always wanted to create without worry of Music Row naysayers complaining she was too traditional, too rock or too tattooed. The result is her 11-song album, Girl Going Nowhere, set for release tomorrow March 30 on Atlantic/Warner Bros. Nashville.

"After 11 years in Nashville, you start to question if what you're doing will actually connect. I think timing and experiences have a lot to do with it," shares McBryde. "The time I spent being something I wasn't just to try and please others, only to be told no; the time we've spent as a band playing for the attention of the bikers in the bar -- doing anything we could to get them to listen; and now the timing of this message of 'making the best of the worst day kinda night,' it seems to be something people need to hear right now, and if I can even help one person turn their day around, then all these couch-surfing playing-for-tips-nights were worth it."

NPR’s Jewly Hight observes in a spotlight on Songs We Love, “McBryde sings with sanguine fortitude, and there’s a companionable, anthemic, underdog appeal to some of her best-known songs…But only a seasoned songwriter could’ve captured subtleties of committed affection the way that she did in ‘Andy (I Can’t Live Without You)’.”

Seasoned yet staunch in her vision for Girl Going Nowhere, The New York Times calls the Arkansas-native’s album a “vivid and accomplished major-label debut.”

The Tennessean’s Juli Thanki notes, “She's captured thousands of new fans with forthright songwriting on topics ranging from addiction (‘Livin' Next to Leroy’) to life on the road (‘Home Sweet Highway’), and her voice, which contains hints of Reba McEntire and Susan Tedeschi.”

And the byproduct of making an album she wrote/co-wrote in its entirety and recorded with her touring band? Girl Going Nowhere, an album that Associated Press declares, “has proven all those doubters wrong.”

In celebration of Girl Going Nowhere, McBryde makes her debut appearance on ABC’s Jimmy Kimmel Live! Monday, April 2 ahead of a Los Angeles show at The Roxy on April 3 before rejoining Luke Combs on tour.

About Ashley McBryde
Lauded by The New York Times for her “clean, powerful and slightly creamy voice,” Ashley McBryde caught the attention of some of Nashville’s most raucous entertainers, landing her dates opening for Eric Church, Chris Stapleton, and, most recently, Miranda Lambert and Luke Combs. The Washington Post raves, "McBryde's blue-collar storytelling and straightforward singing set her apart," including a set during her debut on the Grand Ole Opry stage, notably sharing "Girl Goin' Nowhere," the seminal title track from her March 30, 2018 Jay Joyce-produced LP for Atlantic Records/Warner Nashville. McBryde was the most added new artist and most added female with her debut single “A Little Dive Bar in Dahlonega.” The track hit No. 1 on SiriusXM’s The Highway Top 30 in 2017 and is currently Top 35 and climbing at Country radio. Learn more about McBryde at AshleyMcBryde.com or follow her on Facebook at facebook.com/ashleymcbryde. Instagram @ashleymcbryde and Twitter at @AshleyMcBryde.