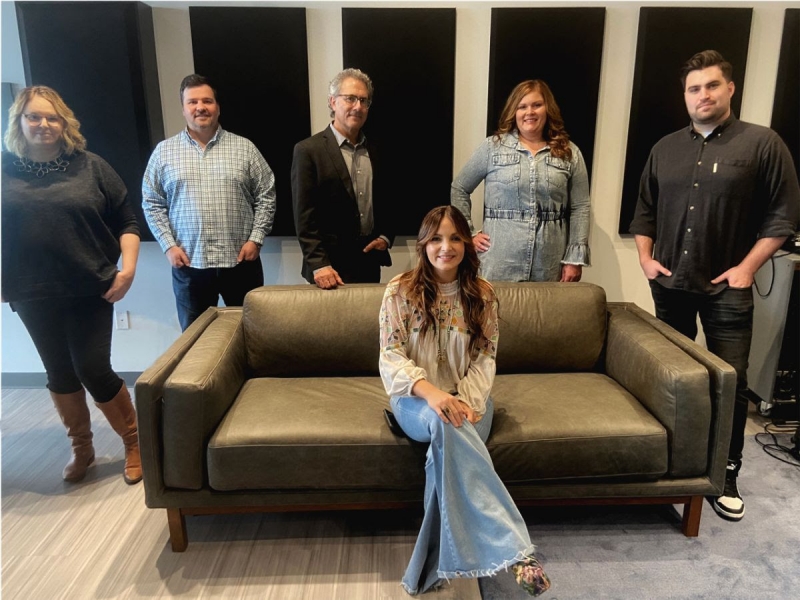 Kentucky native and singer/songwriter Brit Taylor is the newest artist to sign a distribution deal with global music solutions company ONErpm. Taylor recently released Real Me, her self-reflective debut 10-song album that American Songwriter declared a “stunner,” is available on all platforms HERE. The project, produced by GRAMMY® nominated producer Dave Brainard, tips its hat to honest country music and features a handful of songs Taylor co-wrote with the Black Keys’ Dan Auerbach. “It's not often you get to work with artists who have honed in on who they are and what they're trying to say through their music,” says ONErpm’s A&R representative Jeff Tobias. “Brit is a one of a kind artist who is creating undeniably standout music that will continue to wow audiences everywhere.” ONErpm fulfills artist label services from a traditional record label structure to distribution and everything in between, leveraging proprietary technology, marketing, analytics and localized support to over 300,000 artists, music labels and video creators worldwide. They are one of the world’s largest YouTube Multi Channel Networks (MCN) specializing in music. In 2020, ONErpm is currently celebrating its 10th anniversary. Nearly 300 employees internationally, including those at in-house label arm Verge Records in Nashville, play a crucial role in fostering the careers of thousands of artists around the globe.  Taylor simply captures life and pain with poetic ease and plain honesty. She writes and sings about what she lives, what she knows. The record – a reminder itself that an album can tell a story – is mindfully crafted to capture Taylor's pure authenticity and her Eastern Kentucky roots. By blending twangy guitars, crying steels, emotional lyrics and sultry vocals, Real Me redefines traditional country music. Not afraid to be influenced by the past she loves and adapt it to the future she is, the album – with its influences that include Bobby Gentry vibes, Loretta Lynn honky-tonk, Waylon and Willie waltzes, western swing and heart-tugging vocals – tells musical stories that manage to be dramatic, humorous, heartfelt and down-right honest.Taylor knows you can’t fake authenticity. Real Me reflects Taylor’s story and, in some way, it is everyone’s story. About Brit Taylor Brit Taylor and her luscious alto burst onto the scene in early summer with her release of “Waking Up Ain’t Easy,” which had success on Spotify’s Indigo and Pulse of Americana playlists, a video premiere on DittyTV, critical acclaim from outlets including American Songwriter (“emerging Americana artist with the luscious alto tone”), MusicRow (“liquid alto singing voice, with bright, ‘teardrop’ accents’ “), and Billboard (steel guitar-drenched, laid back”) and airplay on Lightning 100. Taylor’s other singles have earned praise from numerous outlets including Rolling Stone (“searing, soulful”), Billboard (“its sultry Bobbie Gentry vibe”) and other major outlets.  All songs have found homes on playlists from Spotify, Apple and Amazon, including Spotify’s Pulse of Americana, Emerging Americana, Indigo and New Nashville.  Taylor was voted No. 2 on the CMT 12-Pack Countdown and the No. 2 most added album on AMA/CDX Radio Chart, tying with Waylon Payne.  “Married Again,” a track from the album, will be included in the nationally syndicated NPR World Café show later this month.  American Songwriter presented a full-page profile of Taylor in its Nov/Dec print edition.A small-town girl who took to the Kentucky Opry stage when she was only seven, she loves her music, her goats, her dogs, her mini-farm and her family. After she followed the famous Music Highway out of Kentucky and into Tennessee, she attacked life at warp speed.  A college degree, a marriage, a publishing deal and a band filled her days. Life was good. And then it wasn’t.The marriage fell apart about the same time the band dissolved. Her dog died, and her car quit running. The bank was ready to take her home back. Taylor was forced to look deeply in her soul, and she knew it was time to create the kind of music that was honest to her. Without looking back, she started anew, leaving her publishing contract, her band and her marriage behind.Forming a small business to pay the bills and feed her menagerie of animals all while shaking herself from the throes of depression, Taylor was able to become her “real me,” reaching into her heart to create the lyrics and the sounds that reflect who she is, what she is. Real Me is Brit Taylor’s journey. It is a collection of rhythmic hooks and catchy and perceptive melodies that will take up residence in your head and you heart. The power of Taylor’s music is that it is refreshingly simple yet surprisingly complex, yet both empathetic and empowering. Always true to herself, she continues to tells stories which manage – whether they are dramatic, humorous or heartfelt – to be as authentic as she is. About ONErpmONErpm is a redefining force in the new music economy and one of today’s fastest-growing music companies in the global marketplace. With offices and studios in New York City, Nashville, Atlanta, Miami, Los Angeles, Sao Paulo, Rio de Janeiro, Buenos Aires, Bogota, Mexico City, Madrid, Moscow, Lagos and Kingston, ONErpm occupies a unique space between traditional record label and distribution company, leveraging proprietary technology, marketing, analytics and localized support to deliver business solutions to over 300,000 artists, music labels and video creators worldwide. Home to more than 5,000 YouTube channels that collectively generate over 8 billion views a month, ONErpm is one of the world’s largest YouTube Multi Channel Networks (MCN) specializing in music. For more information, visit www.onerpm.com.