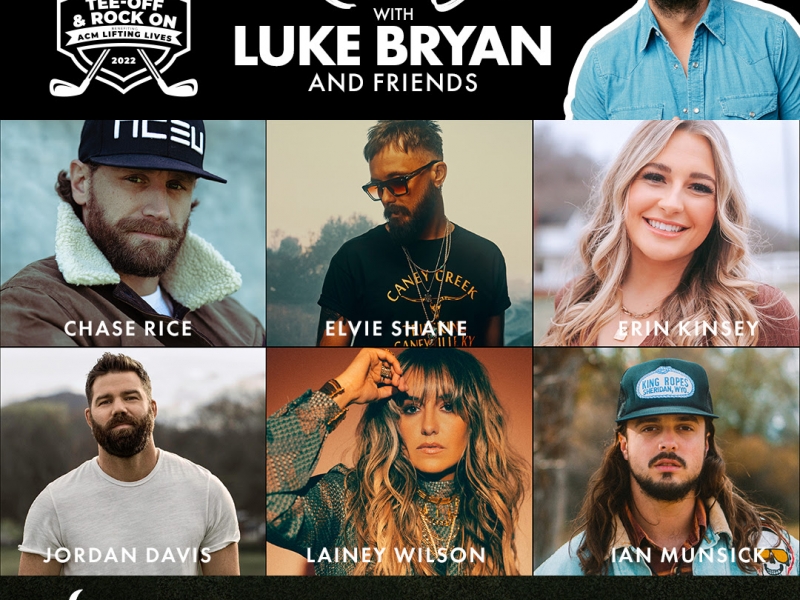 In addition to the live entertainment on the Aristocrat Gaming Stage, the event kicking off at 11 a.m. will also feature a reimagined golf tournament experience bringing together artists, industry members and fans in support of ACM Lifting Lives.

For more information, visit ACMLiftingLives.com. For general Academy of Country Music information, visit ACMcountry.com and follow the Academy on social media @ACMcountry.
Artist Press Photos Available for Download HERE
About ACM Lifting Lives®
ACM Lifting Lives® is the philanthropic arm of the Academy of Country Music dedicated to improving lives through the power of music. Through partnerships with artists and strong ties in the music industry, ACM Lifting Lives® funds music health programs while also serving members of the music community who face unexpected hardships through its Diane Holcomb Emergency Relief Fund. With generous donations and the support of artists and fans, ACM Lifting Lives has funded national music therapy programs serving various mental and physical health organizations. Some of the recipients have included patients at children’s hospitals and other healthcare facilities, recovering veterans, people with Williams syndrome and individuals with mental illness. The ACM Lifting Lives COVID-19 Response Fund was created in April 2020 in response to the global pandemic. To date over $3.8 million has been distributed to assist individuals working in the industry who suffered financial crisis and hardship as a result of the pandemic.  For more information, please visit ACMLiftingLives.org.

About Erin Kinsey
Texas native Erin Kinsey may be a country music newcomer, but she’s been hard at work since she was 11 years old. Now 21, she is the epitome of a 10-year overnight success who has established herself as a Nashville singer-songwriter with a bright future ahead of her. Having moved from Texas to Tennessee the morning after her high school graduation, Kinsey quickly immersed herself in country music, and in return she was embraced by music insiders who have helped her reach her larger-than-life goals. And so far, so good. She consistently receives close to 10 million views when she posts an original song on TikTok, and her debut single, “Just Drive,” is impacting country radio now. The song has been featured on SiriusXM’s The Highway “On The Horizon” and has over 22 million views/streams to date and counting. Kinsey is signed to RECORDS Nashville, a joint venture with Sony Music, and her debut EP, 40 East, releases on March 25. Where she goes from here is just about everywhere. Connect with Erin at ErinKinsey.com, on Instagram / Twitter / TikTok: @ErinKinseyTx and Facebook: @ErinKinseyOffiical.

About Ian Munsick
Breathing fresh Rocky Mountain air into the Nashville music scene, Ian Munsick is pioneering a new brand of country. The Wyoming-born singer / songwriter’s upbringing was a mix of working the ranch and working crowds. Under the tutelage of their fiddle-playing father, Munsick and his two older brothers grew up playing everything from bluegrass to The Beatles. Incorporating elements across genres, he has now begun to establish himself as a progressive artist with an old soul. Captivated by traditional lyrical truth and the modern soundscape, Munsick followed his ear to Music City. In 2017 he released a self-titled EP, winning iHeartRadio’s Rocky Mountain Song of the Year for the rootsy “Horses Are Faster.” Since then, Munsick has signed a major label record deal with Warner Music Nashville, earned more than 150 million global streams and picked up another Song of the Year Award for his imagery-soaked ode to the west, “Long Haul.” His debut album Coyote Cry features his mile-high tenor underscoring self-penned songs that conjure equal parts epic adventure and down-to-earth wisdom. The record marks the dawn of western pop-laced country, pulling a thread straight from Chris LeDoux through Post Malone. Munsick, who was named to Spotify’s inaugural Hot Country Artists to Watch class, is starting 2022 as a MusicRow Next Big Thing artist. In addition to his own headlining dates, he is currently on the road alongside label mate and duet partner Cody Johnson. Fans are finding that with Ian Munsick, western country is reborn. For more information, visit IanMunsick.com. About Chase RiceWith more than 2.2 million albums sold and over 2.1 billion total streams, plus a legion of passionate fans at his high-energy concerts across the globe, Chase Rice has established himself as a powerful force in Nashville and beyond – yet he genuinely sees current single “If I Were Rock & Roll,” available everywhere now, as the launching pad for music that says what he wants to say, how he wants to say it. The song serves as a follow up to his three-part project, The Album, featuring his latest No. 1 hit, “Drinkin’ Beer. Talkin’ God. Amen. (feat. Florida Georgia Line)” and Platinum-certified Top 10 hit “Lonely If You Are.” This is the same gravelly-voiced Chase Rice fans first fell in love with years ago – but better. Freer. Unbeholden and uninhibited, somehow capable of evoking Chris LeDoux and The Chronic, campfire singalongs and stadium anthems, all at once. The new music builds upon the success of his sophomore album, Lambs & Lions, which featured the Double-Platinum, two-week chart topper “Eyes On You” – Rice’s first No. 1 as an artist and the most-streamed song of his career. Lambs & Lions followed Ignite the Night, which debuted at No. 1 on Billboard’s Top Country Albums and No. 3 on the all-genre chart, producing a pair of Top 5 hits; “Ready Set Roll” and “Gonna Wanna Tonight.” In addition to selling out arenas with Kane Brown and stadiums with Kenny Chesney, Rice also opened for Garth Brooks to 70K+ at Detroit’s Ford Field in early 2020 and has consistently sold out 3,000+ seat venues on his own headlining tours. For more information, visit ChaseRice.com and follow Rice on Facebook, Twitter and TikTok @ChaseRiceMusic and on Instagram @ChaseRice.

About Elvie Shane
As a native of small-town Kentucky, early touchstones like Dwight Yoakam, Steve Earle and John Fogerty joined Wheelhouse Records’ Elvie Shane’s Gospel roots to form the bedrock of his taste – along with R&B classics like The Temptations and modern superstars like Eminem. Shane’s new single “County Roads” is officially available at country radio now, and was one of the most added songs at country radio upon release. Shane just celebrated multiple milestones with his hit single “My Boy” topping the charts at country radio and being certified Gold by the RIAA. “My Boy” is taken from Shane’s just-released debut full length album Backslider. Shane co-wrote the set that embodies the crunchy hooks of classic rock, the nostalgia of country music as well as the emotional electricity of Gospel and R&B. Critics have already been quick to praise the cohesive set with the album landing on 2021 “Best Of” lists including Billboard, Rolling Stone and Nashville Scene. “If you listen to just one major-label debut by a dude this year, consider Elvie Shane’s” declared Rolling Stone, while Stereogum noted the record “forces you to rethink anything you think you know, or assume, about the genre’s Music Row bros.” Billboard also determined Shane is “making the case for a new mainstay in country music.” The singer/songwriter recently announced his first-ever headlining run, with his My Kinda Trouble Tour now underway. The multi-city stint will see Shane play major cities including Chicago, Ill., Nashville, Tenn. and more, and will mark some of Shane’s first live performances of Backslider. Shane has opened for Jason Aldean, Toby Keith, Brothers Osborne, Brett Young and Lady A, to name a few. Shane also just wrapped a stint on the road opening for Brooks & Dunn on their 2021 Reboot Tour. For more information, visit ElvieShane.com.