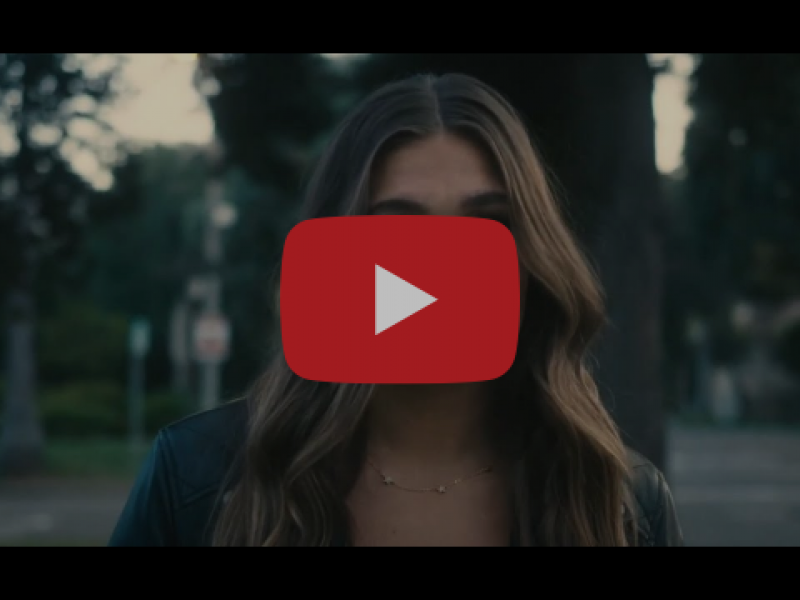 NASHVILLE, Tenn. – Singer/Songwriter Abby Anderson returned earlier this fall with a new attitude and fresh new music to accompany her new outlook “singing with more guts than ever” according to MusicRow on track “Bad Posture.” While the reflective, self-empowerment anthem was personally about her own struggles in the music industry, the powerful song immediately began to resonate with those facing domestic violence.

“I’ve been blown away by the response to this song. The messages I’ve been receiving from women in abusive relationships and those impacted by domestic abuse was so unexpected,” shares Anderson.

Directed by actress Eliza Taylor, from the hit series “The 100,” the just released video for “Bad Posture” depicts Anderson’s struggles in an abusive relationship before finding the courage to leave. Although the video concept was in place before fan reaction to the song, it was important for Anderson the video direct viewers to the resources available at National Domestic Violence Hotline after the flood of messages she received.

“I hope this song and video both give anyone that might be going through this a voice, strength to leave or just help them not feel as alone,” Anderson continues. “Because they truly are not alone. Organizations like National Domestic Violence Hotline are there to help. It is why we wanted to spotlight them in the video so anyone watching can get the help they need.”

Last night to mark the release of the video, Anderson and Taylor participated in a live Q&A via Instagram with fans to discuss the song and video before its YouTube premiere. Watch the official “Bad Posture” video HERE.

Written alongside Anna Vaus and produced by Marshall Altman, “Bad Posture” showcases Anderson’s appreciation for the experiences and early life lessons that have helped her recognize and accept happiness, and embrace her past and her present with a sound that fully captures who she is as an artist, a songwriter and as a woman who isn’t afraid to stand up tall and say what she stands for.

The official video for “Bad Posture” follows recent releases “Insecure” and “Bad Posture,” which finds her “delving deeper into past pain and coming out stronger” according to Billboard. Anderson has received early playlisting support with New Music Friday, Good Vibes, and Pop Drive on Spotify alongside Apple Music’s New in Pop, New in Country, and New in Singer-Songwriter. The two tracks are the first taste of new music from her album due in 2022, via Stem.

About Abby Anderson:
After moving to Nashville at just 17, the Texas native began playing gigs at popular Nashville venues such as The Bluebird Cafe, The Listening Room Cafe and Tin Roof while working as a nanny to support herself. She signed a publishing and record deal and released her first song – it truly felt like she’d gotten her big break, catching the attention of country music tastemakers, from being named Pandora’s Country Artist to Watch to one of CMT's 2018 Next Women of Country alongside Ashley McBryde and Kassi Ashton, her bubbly enthusiasm was palpable.

Anderson’s first release, “Make Him Wait,” leaned into her Mormon upbringing and all the values a "good girl" should embody. Shortly after she released her debut EP, I’M GOOD, made her Grand Ole Opry debut and performed at CMA Fest and Dierks Bentley's Seven Peaks Festival. She was recognized as a member of The Bobby Bones Show's Class Of 2019, Music Row Magazine's 2019 Next Big Things and Sounds Like Nashville's list of Country Artists to Watch in 2019. She went on to make her national television debut on NBC’s “TODAY Show” and toured with Russell Dickerson, Chase Rice, Rob Thomas, Brett Eldredge and more.

Anderson walked away from her label deal in 2020 to focus on healing her mind and body, accepting who she was as an individual, and finally after 3 years, creating music she was passionate about. Giving herself permission to trust her own instincts for the first time in her career and creating her own identity rather than seeking the approval of those around her, Abby began a new journey in 2021, one full of acceptance and positivity. She is set to release new music that embraces her past and her present with a sound that fully captures who she is as an artist, a songwriter and as a woman who isn’t afraid to stand up tall and say what she stands for. Latest releases “Insecure” and “Bad Posture,” are the first taste of new music from her album due out early 2022, via Stem.