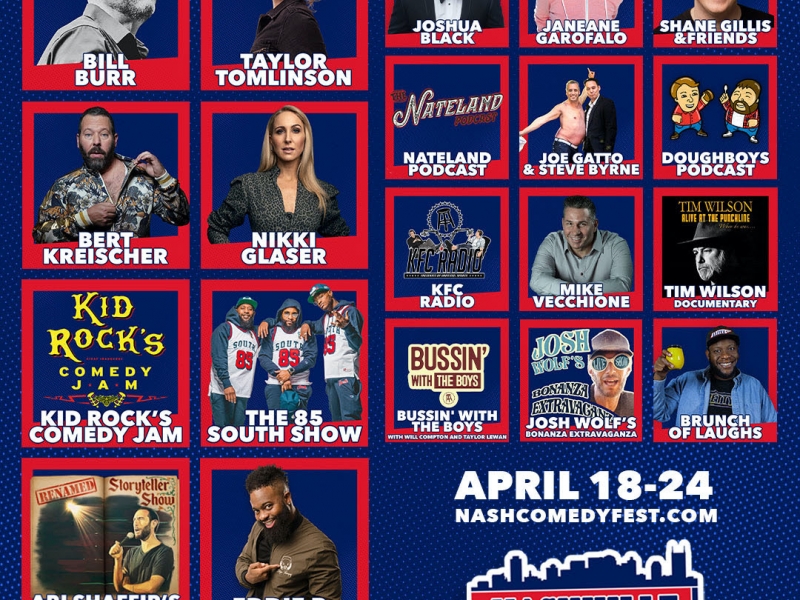 NASHVILLE, Tenn. – Music City’s annual Nashville Comedy Festival will return on April 18 running through April 24, with star-studded performances in iconic venues throughout the city, including Ryman Auditorium and The Opry House.

Kid Rock’s Comedy Jam, hosted by and featuring the rock star in his first ever comedy appearance, will kick off the week of laughs on April 18 at 7 p.m.  Joining Kid Rock for the Comedy Jam at The Ryman are Nashville favorites Donnell Rawlings, Shane Gillis, Big Jay Oakerson, Chris Porter, Eleanor Kerrigan, and Chance Willie.

Another mega comedy event follows with Ari Shaffir’s Renamed Storyteller Show on April 20 at 7 p.m. featuring Ari Shaffir, Sal Vulcano, Big Jay Oakerson, Shane Gillis, and more surprises + special guests all together on the Ryman stage for one night only.

The wait is over to see Bert Kriescher’s party boy antics live in person. After having to postpone his April 2020 show dates due to the covid pandemic, Kreischer’s Nashville takeover starts on April 21 at 7 p.m. at The Opry House, and the party continues with the comedian’s first appearance at the Mother Church for two SOLD OUT shows on Friday, April 22 at 7 p.m. and 9:30 p.m.

Fresh off the release of her hit Netflix special “Look at You,” the Ryman hosts breakthrough comedian Taylor Tomlinson in her highly-anticipated Deal With It Tour on Saturday, April 23 at 7 p.m.

One Night with Nikki Glaser is certain to close down the Ryman’s week of comedy with a bang, as the Bangin’ star brings her shockingly-honest, no-holds barred style of comedy to the pews on April 24 at 7 p.m.

Also shutting down the festival are three of America’s boldest, wildest and most hilarious superstars, DC Young Fly, Karlous Miller, and Chico Bean in The 85 South Show Live: Return of the Ghetto Legends Comedy Tour on April 24, 8 p.m. at The Opry House.

About Ryman Auditorium:
A National Historic Landmark, Ryman Auditorium was built by Captain Thomas G. Ryman in 1892 as the Union Gospel Tabernacle. A 13-time winner of the prestigious Pollstar Theatre of the Year award, the historic venue is well-known as the Mother Church of Country Music and is the most famous former home of the Grand Ole Opry (1943-1974). Since the first concert on May 4, 1892, the Ryman has celebrated an array of entertainment acts and all genres of music on its hallowed stage – from magician Harry Houdini to comic actor Charlie Chaplin and former president Theodore Roosevelt to civil rights leader Martin Luther King Jr., plus music icons from all genres including Johnny Cash, Patsy Cline, B.B. King, Sheryl Crow, Garth Brooks, Lizzo and Harry Styles. The Ryman’s thriving concert schedule hosts more than 200 shows per year, and the venue is open for daytime tours year-round. The Ryman has also been featured in numerous film and television projects including Coal Miner’s Daughter, The Johnny Cash Show, American Idol, Nashville and more. Ryman Auditorium is owned by Ryman Hospitality Properties, Inc. (NYSE: RHP), a Nashville-based REIT that also owns and operates the Grand Ole Opry, 650 AM WSM and Ole Red. For more information, visit ryman.com.

About Outback Presents:
Creator of the Nashville Comedy Festival, Outback Presents is the leading independent, full-service promoter of live entertainment. From their home base in Nashville, TN, Outback Presents specializes in producing music and comedy shows, tours and festivals across North America and connecting their diverse roster of artists with their fans. For more information, visit www.outbackpresents.com
####