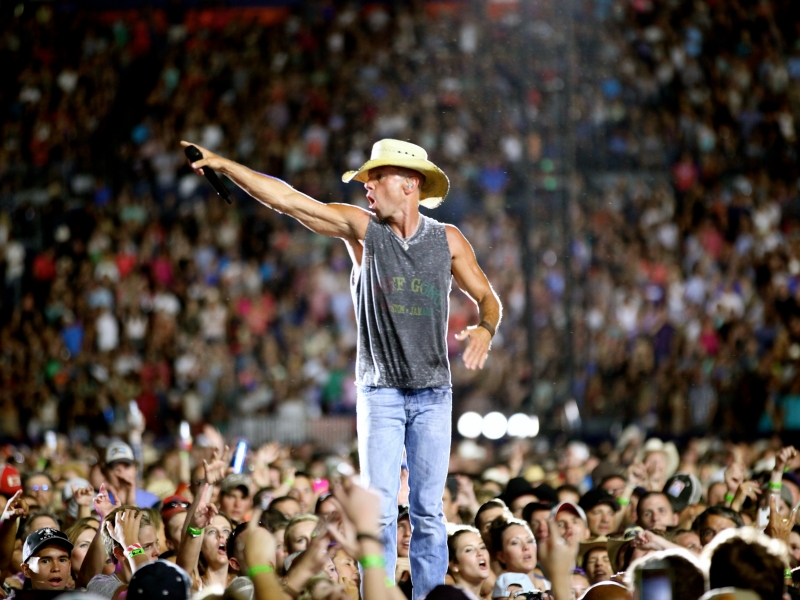 Foxborough, Mass -- Leave it to the No Shoes Nation! When word hit that the man Los Angeles Times deemed “The People’s Superstar” would play Gillette Stadium August 25, the pre-onsale buzz was so strong that Kenny Chesney agreed to a second date. Given the passion New England has demonstrated since his first stadium show there in 2005, the songwriter/superstar from East Tennessee couldn’t imagine a summer without Boston.

But he couldn’t have imagined the fervor. When the dust cleared – in spite of the last-minute addition of a second show – more than 106,000 tickets had been sold in a matter of hours. With only a few hundred open seats, it appears Boston doesn’t need a tour to turn out for what’s become a rite of summer: the New England gathering of the No Shoes Nation.

“I didn’t know if it was the right thing,” Chesney concedes. “It feels a little like cheating, because I said I was taking the year off. But once we sent the trucks and the gear home and I stopped for a little bit, I was still hearing the cheers from those two crazy nights in my ears. How often can you tap into energy that carries you for weeks; that inspires you and stays with you? So I called my manager and my promoter, said, ‘I know it’s unconventional, but I’d really like to play Boston – even if it’s just once.’

Now they tell me we sold over 106,000 tickets in a couple hours,” he marvels. “Maybe the No Shoes Nation wants to see me as badly as I want to see them. Because knowing those shows are coming… that’s going to make winter pass a whole lot faster.”

These shows come on the heels of the 8-time Entertainer of the Year’s 14th and 15th sell-outs at the home of the New England Patriots. Breaking all concert ticket sales records at Gillette Stadium, Chesney has headlined the stadium more times than any other performer, due in part to the intense passion of his fans in the Northeast.

“The Spread the Love Tour had hands-down the craziest, loudest shows of my whole career,” Chesney marvels. “At a time when people might be settling down a bit, the No Shoes Nation is singing better, cheering louder and – honestly – loving each other in a way that makes me proud. These songs I sing are theirs as much or more than they are mine, and it’s an honor to be able to go out and play ’em for them even on my summer off!”

With a GRAMMY nomination this morning for “Setting The World On Fire,” his two week chart-topping duet with P!NK that now sits inside Hot AC’s Top 20 with a bullet, the man who was awarded BMI’s President’s Award and the Country Music Association’s Pinnacle Award isn’t slowing down as an artist – or a performer. And on August 25 and 26, if you’re one of a lucky few, you may still be able to get one of the handful of tickets left to see Kenny Chesney at Gillette Stadium before they’re gone.