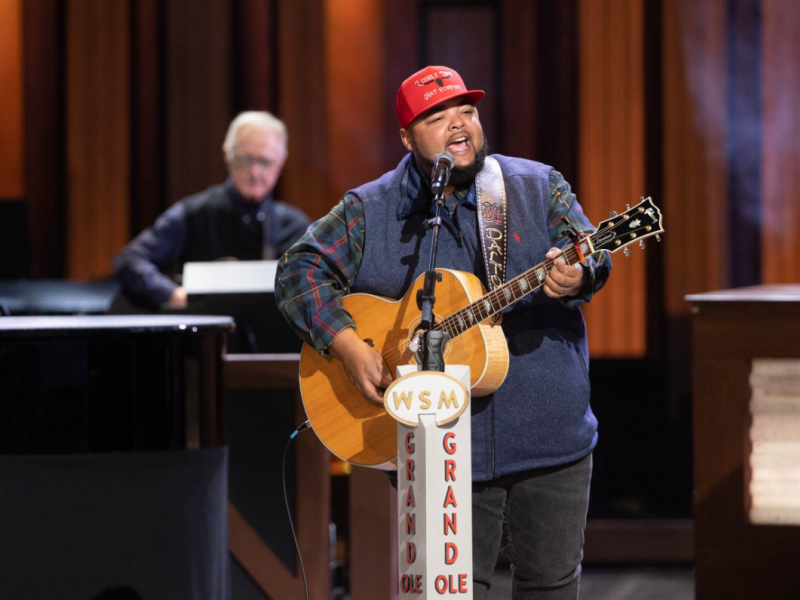 NASHVILLE, Tenn. – Rising country newcomer Dalton Dover continues to earn accolades and benchmarks among a series of milestones in a pivotal year as Pandora names him a 2023 Artist to Watch while CMT welcomes him as a member of their 2023 LISTEN UP class.

Earlier this month, Dover made his Grand Ole Opry debut with a performance of two new songs, “Giving Up On That” and “Dirt Roads And Jesus,” the latter being the first single he will release in 2023 via Universal Music Group Nashville/Mercury Records, who he signed with earlier this year.

“I never thought in a million years that I’d be standing right here in this circle,” Dover shared on stage. “I brought my family last year, and we walked through on the tour here at the Opry. Little did I know that a year later, I'd be making my Opry debut. It's pretty special to say the least.”

In August, Dover was on the final night of his Ole Red residency, performing across the Nashville, Gatlinburg and Orlando locations, when legendary country artist Blake Shelton dialed in on the red phone at Ole Red Nashville and interrupted Dover’s set with an invitation to make his Grand Ole Opry debut. He tearfully accepted, replying, “I’ll be there, I promise.”

His debut invitation was a full circle moment for Dover, as Shelton marked one of the first milestones in his career on Season 16 of “The Voice,” where the Georgia native earned a chair turn from the coach for his performance of Keith Whitley’s “Don’t Close Your Eyes.”

After being named a 2022 Spotify Artist to Watch, he released “Hear About A Girl,” earning praise from Billboard noting, “Dover’s voice is both intimate and commanding on this track,” while MusicRow asserts it confirms “we’re in the presence of a master country talent when this man sings…Make him a star. Now.” He followed the song with “Damn Good Life,” with The Boot sharing, “Dover is savoring every moment in his uplifting new single,” while Country Now observes, “Between the optimistic narrative that Dover delivers through his crisp vocals and the carefree tune highlighted by the impressive guitar strum, nothing but a good time can be had when this song comes through the speakers.”

Dover has honed his captivating live show with two performances at CMA Fest, opening for Luke Comb’s Mercedes-Benz Stadium show in Atlanta, Ga. and joining Priscilla Block’s Welcome To The Block Party Tour. In 2023, he prepares to make his international debut in March at C2C: Country to Country Festival’s CMA Songwriters Series before joining Chase Rice on the Way Down Yonder Tour in April.

About Dalton Dover
Lauded by MusicRow as a “master country talent,” twenty-three-year-old Dalton Dover first started singing at church as a kid, winning his fifth-grade school talent show performing Justin Bieber’s “Baby.” In that moment Dover’s love of performing was born. By the age of 16 he had picked up a guitar and started teaching himself to play, yet it was his grandfather who turned him on to country music and artists such as Keith Whitley, Rhett Akins, Joe Diffie and Steve Wariner. Performances at local bars soon followed along with sharing covers of some of his favorite songs on TikTok. It was there he caught the ear of producer Matt McV and A&R veteran and founder of Droptine, Jim Catino, who quickly signed Dover. His debut track “You Got a Small Town,” produced by McV, quickly garnered critical acclaim from Billboard, MusicRow, Country Now and Wide Open Country. With his debut and his follow-up “Baby I Am” earning notable playlisting, Dover was named a Spotify Hot Country 2022 Artist to Watch along with a spotlight as Billboard’s February Country Rookie of the Month and a nod for MusicRow’s 2022 Discovery Artist of the Year. Dover’s latest release “Damn Good Life” is available now. After opening for Luke Comb’s Mercedes-Benz Stadium show in Atlanta, Ga. this summer, Dover set out on a seven-date run of his own headlining shows, performing across multiple locations of Blake Shelton’s Ole Red. Dover recently wrapped Priscilla Block’s Welcome To The Block Party Tour in the fall, followed by his debut at the Grand Ole Opry. Dover was named a Pandora 2023 Artist to Watch and is a member of CMT’s 2023 LISTEN UP Class. Recently signing with UMG Nashville/Mercury Records, Dover will release more new music in 2023. For more information, visit DaltonDoverOfficial.com or follow along on Instagram, TikTok, Twitter and Facebook.