“COUNTRY MUSIC: LIVE AT THE RYMAN, A CONCERT CELEBRATING THE FILM BY KEN BURNS” AIRS SUNDAY, SEPT. 8 ON PBS 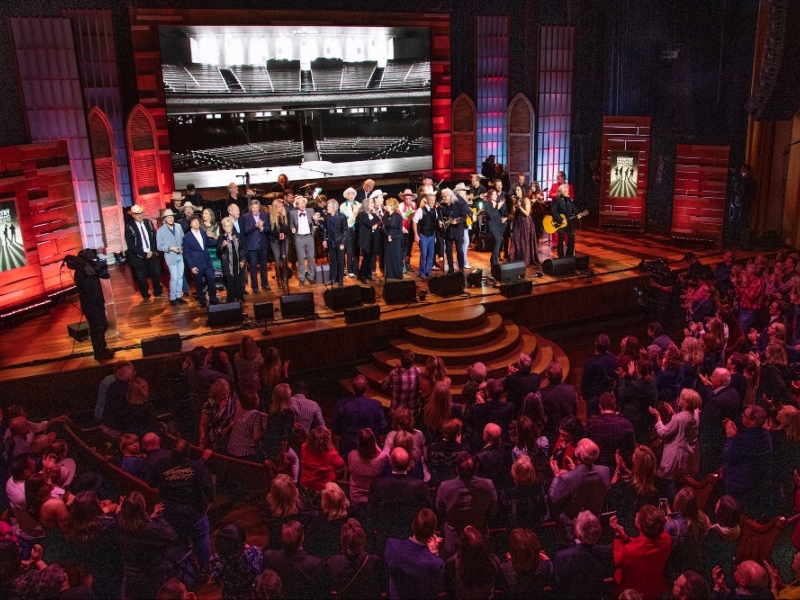 Country music fans are invited to tune in on Sunday, Sept. 8, from 7-9 p.m. CDT for “Country Music: Live at the Ryman, A Concert Celebrating the Film by Ken Burns.” The concert, which was hosted by Burns and filmed in March of 2019, features many of the artists who appear in the upcoming documentary, Country Music, A Film By Ken Burns premiering Sunday, Sept. 15, on PBS.

The concert explores country’s roots while also highlighting the diversity of musical styles and artists that fall under the country music label. Paying tribute to the genre’s eclectic, layered history, “Country Music: Live at the Ryman” provides viewers with a taste of everything from western swing and bluegrass to honkytonk and cowboy music.

In addition to live performances of iconic country songs, select clips from the film were highlighted throughout the evening. The event was produced by Opry Entertainment and Florentine Films and made possible thanks to the support from Bank of America.

“Country Music: Live at the Ryman” will also stream on station-branded PBS platforms, including PBS.org and PBS apps beginning at 7 p.m. on Sept. 8.

After viewing the live concert event, Rolling Stone reported the evening was full of “remarkable performances.” Highlights include Vince Gill’s “breathtaking” and “sublime” cover of Dolly Parton’s “I Will Always Love You,” Old Crow Medicine Show’s Ketch Secor and Rhiannon Giddens’ “scorching” performance of “Ruby (Are You Mad at Your Man).”

Billboard noted that Holly Williams “breathed life into” her grandfather Hank Williams Sr.’s “I’m So Lonesome I Could Cry.” Viewers can also look forward to “a rousing rendition” of country’s unofficial national anthem, The Carter Family’s “Will the Circle Be Unbroken.” The concert’s full set list is below.

Opry Entertainment along with Belmont University, will host a viewing party in celebration of Country Music from 5 – 9 p.m. CDT on Sunday, Sept. 15, at the Grand Ole Opry House. In addition to a screening of part one of the documentary, the evening includes a pre-event reception and program, and a special 30-minute performance from Grand Ole Opry members Old Crow Medicine Show.

Tickets for this special event are available to the public for $75 at opry.com/kenburns.

About Opry Entertainment GroupRooted in the unparalleled country music history of the Grand Ole Opry, Opry Entertainment Group produces multi-platform entertainment experiences through its growing portfolio of entertainment venues and restaurants, including the world-famous Grand Ole Opry, the iconic Ryman Auditorium, 650 AM-WSM, and our newest brand in partnership with Blake Shelton, Ole Red. Opry Entertainment Group’s long-standing presence in the music industry allows us to partner with country music artists at all stages in their career to bring  entertainment to country music lovers around the world. Through concerts, tours, restaurants, retail, publishing, digital content, and more, Opry Entertainment Group connects millions of music fans to the artists they love through experiences they’ll never forget. Opry Entertainment Group is a subsidiary of Ryman Hospitality Properties, Inc. (NYSE: RHP).About PBS
PBS, with more than 330 member stations, offers all Americans the opportunity to explore new ideas and new worlds through television and digital content. Each month, PBS reaches over 120 million people through television and 26 million people online, inviting them to experience the worlds of science, history, nature and public affairs; to hear diverse viewpoints; and to take front row seats to world-class drama and performances. PBS’ broad array of programs has been consistently honored by the industry’s most coveted award competitions. Teachers of children from pre-K through 12th grade turn to PBS for digital content and services that help bring classroom lessons to life. Decades of research confirms that PBS’ premier children’s media service, PBS KIDS, helps children build critical literacy, math and social-emotional skills, enabling them to find success in school and life. Delivered through member stations, PBS KIDS offers high-quality educational content on TV – including a 24/7 channel, online at pbskids.org, via an array of mobile apps and in communities across America. More information about PBS is available at www.pbs.org, one of the leading dot-org websites on the internet, or by following PBS on Twitter, Facebook or through our apps for mobile and connected devices. Specific program information and updates for press are available at pbs.org/pressroom or by following PBS Pressroom on Twitter.