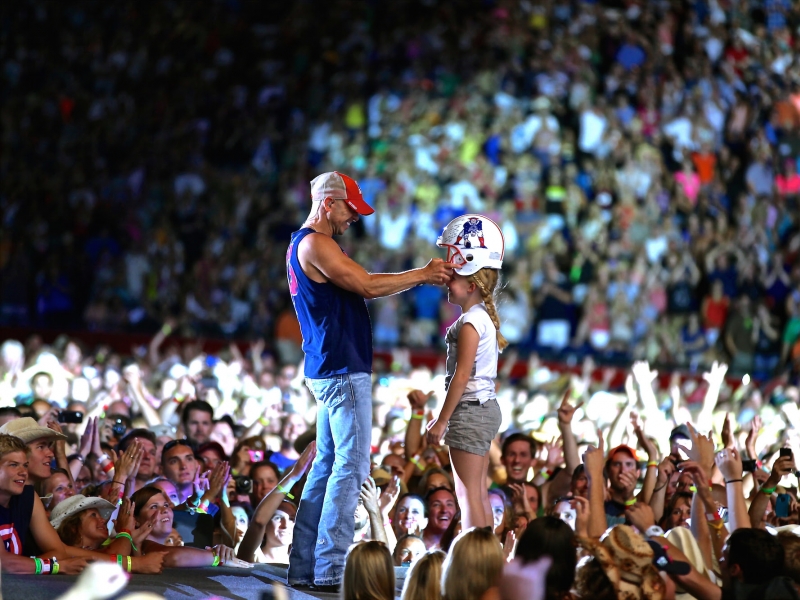 Foxborough, Mass. (August 19, 2015): It is where the No Shoes Nation was named, and one of the three original stadium markets a decade ago for Kenny Chesney. But since then, the 8-time Entertainer of the Year has enjoyed such an affinity with Boston and the fans from the surrounding area his high-energy stadium shows have become a rite of summer.

After eight tours, Kenny Chesney has sold 736,149 tickets for the Gillette Stadium shows. It is where the No Shoes Nation was christened. A banner marking the naming of the No Shoes Nation flies from the rafters along with all the New England Patriot’s Championship and Super Bowl banners.

As the end of The Big Revival 2015 arrives, the Kraft family issued the following, “Summertime in New England never feels complete without a visit from Kenny Chesney, the quintessential American performer who brought country music to the forefront and mainstream in New England. He has performed more shows at Gillette Stadium than any other artist and we consider him family. We cannot wait to greet him with 120,000-plus members of ‘No Shoes Nation’ for his ‘Big Revival’ on Aug. 28 and 29.”

Having taken 2014 off to concentrate on recording what became The Big Revival, which spawned the GRAMMY-nominated, multiple-week No. 1 “American Kids,” as well as his 26th and 27th No. 1s “Til It’s Gone” and “Wild Child,” featuring Grace Potter, Chesney hit the road hard. Setting and breaking attendance records everywhere he went, The Dallas Morning News captured the essence of his shows writing “Two parts Mick Jagger, one part Bruce Springsteen and one part Billy Graham.” But for Chesney, there’s a reason The Big Revival 2015 ends with two completely sold-out nights in Boston.

“There are no fans like Boston fans,” Chesney says. “This has been an amazing summer with the fans really digging in and showing me how much music means to them – and it’s inspired us. But Boston was one of the first cities to really embrace this music, to bring an intensity that equaled what we were trying to do – and when you know it’s the last shows you’re playing for a while, you want to take as much of that energy with you when you’re done. In a summer where every show seems to top the one before it, there was only one city we knew could close this down, and close it down with the passion we’ve been building all summer!”

But it’s not the numbers -- it’s the faces, the friends, the cheers and the memories made that matter most to the man The Los Angeles Times called “The People’s Superstar.” As the life-affirming “Save It For A Rainy Day” hits Billboard’s Top 10, Chesney slides into Detroit’s Ford Field for the eighth time this Saturday, Aug. 22. With just a few dates left, you can bet they’re going to get every drop out of the music they’re making.