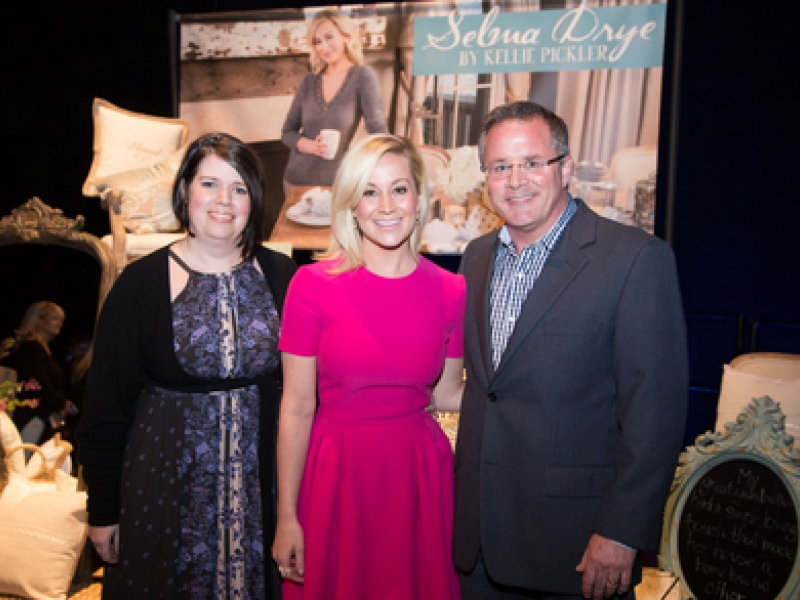 “When you get a house it takes a while to make it feel like a home” said Kellie Pickler. “My great-grandmother had a simple loving touch that made her house a home like no other. It’s really nice being able to take things I know she would have loved and create a line inspired by her.”

“When we began thinking about working with artists on curated Opry collections and spoke with Kellie about the opportunity we immediately fell in love with the stories she told of her great-grandmother Selma Drye” said Kim O’Dell the Opry’s Director of Retail. “We knew the way Kellie described Selma’s unique style and authentic way of living was perfectly in line with the types of product experiences true to the Opry. We’re excited to work with Kellie and more artists in the future all of whom will have their own influences and unique connections to the Opry.”

Selma Drye by Kellie Pickler is available online at www.Opry.com and in the two Grand Ole Opry retail stores in Nashville TN (The Opry Shop at the Grand Ole Opry House and Opry Originals at 300 Broadway).

About Kellie Pickler: Kellie Pickler grew up immersed in country music in the small town of Albemarle North Carolina with the words of Tammy Wynette Patsy Cline Loretta Lynn and Dolly Parton shaping her musical footing. At the age of 19 she gained fame as a contestant on the fifth season of “American Idol.” In 2006 she signed with 19 Recordings/BNA Records and released her debut album Small Town Girl which has gone on to sell more than 900000 copies worldwide and produce three hit singles: “Red High Heels” “I Wonder” and “Things That Never Cross a Man’s Mind.” She followed that in 2008 with her self-titled sophomore record featuring country radio hits “Don’t You Know You’re Beautiful” “Best Days of Your Life” (co-written with Taylor Swift and her first Top 10) and “Didn’t You Know How Much I Loved You.” Having established herself as not only a powerful vocalist but also a songwriter Pickler released her third studio album 100 Proof in 2011 to huge critical acclaim. The album was named the No. 1 Country Album of The Year by Rolling Stone and was listed on “Best of 2012” lists by Washington Post Rhapsody AOL’s The Boot and more. In spring of 2013 Pickler partnered with dance coach Derek Hough and won the Mirror Ball Trophy on “Dancing with the Stars.” On Nov. 11 2013 Pickler released her most recent album The Woman I Am on her new label home Black River Entertainment. She co-wrote three songs on the album including the title cut. Newsday said “with The Woman I Am Pickler shows how the next phase of her career may be bigger than she ever dreamed” while the New York Times said “…she’s matured into herself releasing a string of strong albums of which The Woman I Am is the latest.” She is currently working on new music and plans to release it later this year. Pickler is also an avid supporter of the U.S. military having recently completed her eighth USO Tour in December 2014. For more information please visit www.kelliepickler.com.

About the Grand Ole Opry: The Grand Ole Opry® is presented by Humana®. Opry performances are held every Friday and Saturday of the year with Tuesday Night Opry shows through December 15. To plan an Opry visit call (800) SEE-OPRY or visit opry.com. The Opry presents the best in country music live every week from Nashville Tenn. Celebrating nine decades of entertainment the Opry can be heard at opry.com and wsmonline.com Opry and WSM mobile apps SiriusXM Satellite Radio and its flagship home 650 AM-WSM. The Grand Ole Opry is owned by Ryman Hospitality Properties (NYSE: RHP). For more information visit opry.com.