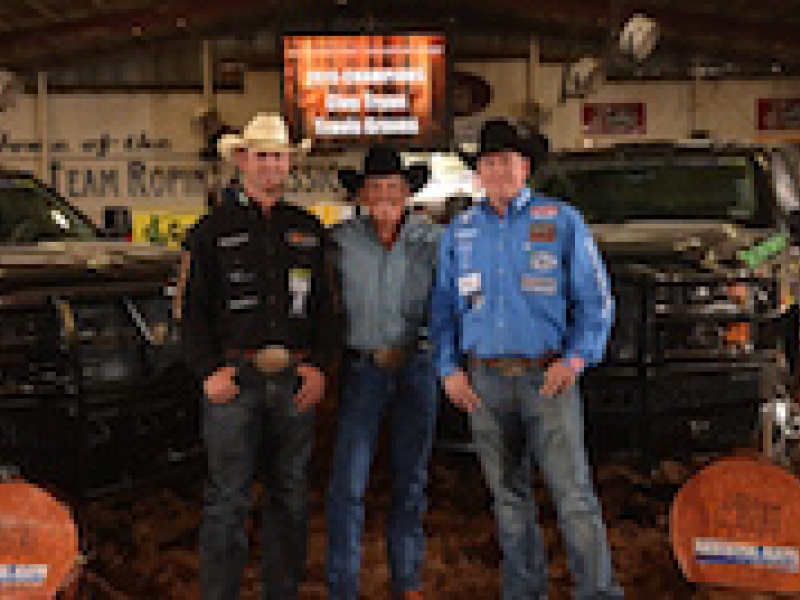 SAN ANTONIO Texas (Saturday March 14 2015) -- The George Strait Team Roping Classic (GSTRC) is the largest open Team Roping event in America and now in its 33rd year the two-day event has awarded over $4 million in prize money to date. This year’s event was no exception drawing 685 teams of the greatest Team Ropers alive with over $740000 awarded in cash prizes. After over 18 hours of competition Clay Tryan of Lipan Texas and Travis Graves of Morgan Mill Texas roped 3-head in 13.95 seconds and were crowded winners and split $272640 in prize money (full breakdown of rankings below). In addition the pair also won 2015 Chevrolet Silverado Dually pickups from Cavender Chevrolet in Boerne Texas and Bruton Strait Xtreme Trailers.

Friday’s festivities drew 1370 ropers from all over the country but eventually dwindled competitors down to the Top 50 teams leading into Saturday’s competition.

Saturday began with the Top 50 team finalists on horseback inside the arena alongside their host George Strait who addressed the arena attendees and participants and welcomed them back to the San Antonio Rose Palace. Before exiting and the festivities beginning roper JD Yates rode in on a 4 year old American Quarter Horse from owner Dean Tuffin named DT Elenor Shine Whiz and much to Strait’s surprise was presented to Strait himself in recognition of his passion for the event over the years.

“It’s been 33 years of fun and I had no idea we’d given away so much” an always reverent Strait responded upon hearing the tally of the prizes bestowed to teams over the years. “Time flies when you’re having fun. This means so much to me thank you!”

In between the 1st and 2nd Go Lieutenant General Leroy Sisco U.S. Army (Retired) joined Strait in the Arena for a very special moment and the two continued their tradition of presenting a home as part of the Military Warriors Support Foundation (MWSF) “Homes 4 Wounded Heroes” (H4WH). Corporal Leland Arledge a purple heart recipient and his wife Jennifer were recognized as 52nd recipients from Strait receiving a mortgage free home in Hot Springs Arkansas. The presentation marked the MWSF’s 640th home bestowal with over $150 million in homes presented to date through the non-profit.

Following the 3rd Go the scores were tallied and Tryan and Graves were determined champions. Strait was on hand for the event and congratulated the winners and presented their awards.

The event was originally conceived as a small family roping gathering by George Strait and his brother Buddy in 1982 is now one of the most prestigious open team roping competitions in the country and consistently attracts the biggest names in the sport.

About George Strait
George Strait is the undeniable “King of Country Music.” His music career spans more than 30 years; includes 60 No. 1 singles more than any other artist in any genre; and boasts 33 platinum or multi-platinum-selling albums more than any country artist and third across all genres behind only The Beatles and Elvis Presley. Strait is the only act in history to have a Top 10 hit every single year for over three decades. Strait has sold more than 68.5 million albums and has earned more than 60 major entertainment industry awards including his most recent Entertainer of the Year sweep at both the Country Music Association Awards (Nov. 2013) and the Academy of Country Music Awards (April 2014).

Strait whose name has become synonymous with “real country” since his 1981 debut was inducted into the Country Music Hall of Fame in 2006. He has since released four more albums including the GRAMMY Award-winning Troubadour. In 2013 Strait set out on The Cowboy Rides Away Tour selling over 1000000 tickets to the record-breaking two-year cross-country final concert tour. Strait shattered the North American indoor concert attendance record by drawing 104793 concert-goers to his June 7 2014 tour finale at AT&T Stadium in Dallas Texas.